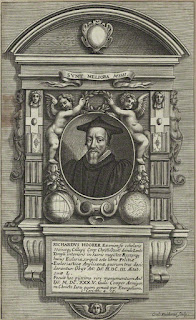 Richard Hooker is a saint at repose who in that state must surely be amused that his great theological reflections are gaining some popular attention among modernists and non-Anglicans. He has much wisdom to offer at this time of great confusion about the Church.

I acquired Hooker's complete works from a member of the Antiochian Orthodox Church where I worshiped through a remarkable circumstance, and since that time I have been reading through the volumes at my leisure. (This was one of several peculiar incidents which led me to believe that my Lord Jesus might be directing me back to the Anglican Way.)

Of course, Hooker's most famous work is the Lawes of Ecclesiasticall Politie, first issued as a folio in sixes by John Windet in 1593. Another volume appeared in December 1597, and after that year "it was customary to sell both volumes together." From 1604, Hooker's work was printed as Books I-IV.

The story of how the Lawes came to print is remarkable in itself, but by the grace of Almighty God, the work was birthed into the world. Against the puritan dissent of the state's ordinances for the running of the Church, Hooker insisted that they were not qualified for that task by virtue of their poor handling of Scripture, which would certainly produce a polity that was wrong by the measurements approved by Scripture and the Fathers' consensus on Scripture. (The 1571 Canon requiring subscription to the Articles of Religion instructs the clergy “not to teach anything except what is agreeable to the doctrine of the Old and New Testament, and what the Catholic Fathers and the ancient Bishops have collected from the same doctrine.”)

Hooker's Lawes isn't merely about how to run the Church. It is about the nature of the Church as the Body of Christ. The body has structure and works in an orderly way as directed by the Head. In other words, Hooker's understanding of church polity is closely aligned to his understanding of what the Bible teaches about creation. In both the doctrine of creation and the doctrine of the Church, Jesus Christ, the Incarnate Word, is central and lifted up. Both show forth the glory and beauty of God's holiness. No group may claim to know better how to re-form the Body of Christ. Indeed, no group has this authority; neither Rome, nor the Puritans, nor even the Church of England.

While this connection between the doctrines of creation and the church is well developed in the Lawes, it is in the "Dublin Fragments" that I find the most satisfying delivery of this relationship. This is found in IV: The creation and governance of the world not yet considered as being evill. And touching the first beginning of evill in the World.  I reproduce that section here for readers to contemplate. I have retained the Elizabethan English, which should not be difficult for readers to follow.

This is how the former Archbishop of Canterbury, Dr. Rowan Williams, subtly dismissed Hooker's contribution:

"I doubt whether he could have entertained any idea that the moral law set out in Scripture was anything other than lastingly valid, and, despite arguments to the contrary, I can't see him easily accepting alternatives to patriarchy as the basis of human (and therefore ecclesial) government. Yet there remains something about his approach to the Church's nature and basis that may offer a few pointers for a theology of Christian belonging less obsessively anxious about the humanly policed limits of the Church than some of our current styles of thought." (From here.)

IV: The creation and governance of the world not yet considered as being evill. And touching the first beginning of evill in the World.

Wherefore to come to the operations or effects of Gods will, because his eternall and incomprehensible being, is soe allsufficinet, as nothing could moove him to worke, butt only that naturall desire which his goodnes hath to shew and impart itselfe, soe the wisest of the verie heathens themselves, which have acknowledged that he made the World, now that noe other reason thereof can be yeelded butt this, his mere goodness, which is likewise the cause, why it cannot be, butt that the world which he hath created, he should love soe farre forth, as it is the workmanship of his hands.

Seing then that good is before evill in dignitie and in Nature (for we cannot without good define and conceive what evill is:) and of good things that come to passe by the will of God, the first is the end which his will proposeth, and that end is to exercise his goodness of his owne nature, by producing effects wherein riches of the glorie thereof may appeare: for as much as all other effects are grounded upon the first existence or being of that which receiveth them; the first determination of God for the attainement of his end, must needes be creation, and the next unto it governance. For that he which created should governe, and that he which should guide, seemeth reasonable in all mens eyes. Whereupon wee come to observe in God two habilities or powers, his power to create, and his power to rule; in regard of the one, wee terme him our God, in respect of the other, our Lord, and King. As God, Creator or Father of all, he hath noe will but only to be gracious, beneficiall, and bountifull. As Lord, both mercie and wrath come from him; mercie of his owne accord, and wrath by occasion offered. Butt his providence, the roote of both is over all. All things have their being from him, by him their continuance, and in him their end. In power he ordaineth them, butt yett with gentlenes; mightily, butt yet in amiable manner. Soe that under him they feele noe unpleasant constrait, framed they are to his inclination without violence to their owne, such is the course of his heavenly Regiment, such his wisdome to ovre rule forceably without force. This providence of God is both generall over the kindes of things, and such alsoe as extendeth unto all particulars in each kind.

Of things created, the noblest and most resembling God, are creatures indued with the admirable guifte of understanding. St. Augstin comparing the first matter whereof all things are made with these last and worthiest workes of Gods hands, saith of the one, it is little above the degree of nothing; the other, little inferior to God, the Creator of all. If God then, clothe the lilies of the field, and provideth foode for the birds of the aire, should we thinck that his Providence hath nott allwayes as especiall care, as well of each particular man, as of mankind, and that for our greatest good everie way, unles some great thing occasion the contrarie. The work of Creation itselfe therefore, and the government of all things simply according to the state wherein they are made, must be distinguished from that which sinne arising afterwards, addeth unto the government of God, least wee runne into their error, whoe blende even with Gods verie purpos of creation a reference to eternall damnation and death.

Related: Wisdom! Let us attend.; The Binary Worldview of the Bible; Binary Sets in the Ancient World