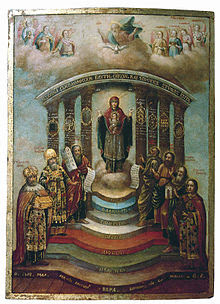 
Genesis 1 describes when God began the work of creation. It uses the words tohu (formless or confused) and bohu (empty or void). The Hebrew phrase "formless and void" (Gen. 1: 2) is tohu wa-bohu and is of Nilotic origin. The word tohu in Isaiah 34:11 means "confused" so it appears that Genesis 1 refers to matter in a confused or chaotic state before God set things in order.

In Nilotic mythology chaos preceded creation. The Egyptians personified chaos (tehom) and believed that this serpent dwelt south of Yebu (Elephantine Island). However, Tehom was overthrown by Tehut, divine Wisdom, also personified. The oldest known law code was the Law of Tehut, attributed to Menes, the first ruler to unite the peoples of the Upper and Lower Nile.

The idea of Wisdom personified is found in Proverbs 9 and Proverbs 8. Here Wisdom speaks in the first person, giving an account of creation:

YHWH had me as the beginning of his way,
the earliest of his works of yore.
Of old I was woven, from the very beginning,
even before the earth itself.

When the deeps were not existent, I was birthed.
When the wellsprings were not yet laden with water,
when the mountains were not yet anchored,
before the hills themselves, I was brought forth.
Before [YHWH] made the earth abroad
and the first clods of soil,
when he established the heavens, I was there.


Wisdom tells us that she “came forth from the mouth of the Most High” as the first-born before all creatures. This sounds very like the Logos of John's Gospel. The creation of the universe was a singular event according to the Bible. Everything that was created in the beginning was created from nothing (creatio ex nihilo). God did not create from preexisting elements or from the substance of a previously existent world. God's power is in the Word which goes forth from God and unfailingly generates life and existence (Isaiah 55:11). The Word is generative.


Wisdom is personified as a female who seeks a place to rest upon the earth and finds that place among the people of Jacob (Sirach 24:8) In this view, wisdom is associated with the Spirit’s presence and guidance among people of the covenant. The covenant extends to those who put their faith in the Messiah whose appearing Wisdom foretold (Genesis 3:15).

In the Biblical worldview there is a fixed and immutable hierarchy in the order of creation, with humans being the most like the Creator. Wisdom delighted in play with humans, a wondrous creation. In the hierarchical conception of Genesis humans rank above the other animals, the animals rank above the plants, and the plants rank above inanimate objects such as rocks. Within these tiers are the "kinds" (essentialism), each reproducing according to its kind.

This explains why homosex and onanism are regarded as serious transgressions of the divine order in creation. Onanism was regarded as an unrighteous deed because the seed that should fall to the earth is the seed of plants, which spring forth from the earth. The seed of man should fall on his own type (the womb), from which man comes forth. Clement of Alexandria wrote, “Because of its divine institution for the propagation of man, the seed is not to be vainly ejaculated, nor is it to be damaged, nor is it to be wasted” (The Instructor of Children 2:10:91:2 A.D. 191).

Thales of Miletus (c. 624-546 BC) was a great observer of the natural order. He was skilled in geometry, astronomy, engineering and the natural sciences. Thales studied in Egypt and calculated the height of the pyramids from the length of their shadows. He measured the time between one solstice and the next. Thales taught that water was the original substance from which all things took form. He called Wisdom arche/archai.

To love Wisdom leads to blessedness (deification/theosis/sanctification). Those who despise Wisdom are cursed. St. Paul explains that their minds are darkened and they cannot see Truth. By the ignorance in them they are alienated from the life of God (Eph. 4:18).

So, Yebu was a boundary of sorts for those people along the Nile. I wonder .. South of Yebu is Borno and probably also where our friend Cain might have been.. Could the boundary at Yebu be a way of addressing fears of things that had actually happened to the south of Yebu? Kind of in a, "Beyond this point, there be dragons," sort of way, or treating that entire region as haunted.

Interesting post. I hadn't thought of the boundaries aspect of Proverbs 8. Avoids some of the scarier pitfalls of the text, to be sure.

Borno would be west of Elephantine Island, called "Yebu" by the ancient Nilotes. It was a holy place where the priests were said to hold back the chaos, probably a reference to the Mega White Nile and the Sudd that it flows through. The Sudd is a great swamp covering an area the size of Florida. Almost impenetrable, the Sudd hampers navigation and is full of crocodiles, and a breeding ground for mosquitoes. The White Nile spreads out as it flows through the lower elevation Sudd so what little land has been prepared for cultivation invariably floods. Malaria is a big problem here.

In Yebu theology, the sun at noon over the Nile represented the temporal and spatial sacred center. This is pictured on ancient Egyptian papyri showing of two lions facing opposite directions on the east and west banks of the Nile and the Sun rests in the center between them. See this: http://biblicalanthropology.blogspot.com/2014/04/the-lion-and-judah.html

BTY, the original name of Jerusalem was also Yebu/Jebu.

Boy, did I flub that one! I bet this is why my high school football coaches never encouraged me to try out for quarterback. I might have tossed the ball to the other team!

Come to think of it - if I ever take up hunting again, I'm using the Buddy-System. No doubt about it.

I do enjoy reading this blog.

Borno is in the region of Lake Chad. In Cain's time that lake was much larger.

I enjoy reading your comments!

Is there a relationship between the 'she' of Proverbs 31, and the 'she' of Proverbs 8 / Sirach 24. I know they aren't the same, 'she' .. just curious if there is a typology in play. For example the distinguishing of land from water during Creation could be like the distinguishing of the Pr 31 Woman's household from everyone else's. Also, in both cases it seems like an awful lot of work is being done.

(Probably not stating this very well)..

The Woman of Proverbs 31 is the ideal wife of a ruler-priest.

The Proverbs 31 Woman is presented as a model of the virtuous or godly woman. She was the wife of a city elder (like Ruth) and a respected figure in her own right (like Deborah and Anna, the Prophetess). Her responsibilities include buying and selling merchandise, which means that she was a business woman (like Phoebe). The Proverbs 31 Woman “makes herself coverings of tapestry; her clothing is silk and purple” (like Lydia).

In other words, the Virtuous Woman is a composite of the industrious, self-disciplined and faithful woman. Such a woman would have been a great asset to her husband. The King James Bible expresses her worth in these words: “A wife of noble character who can find? She is worth far more than rubies.” We wonder if this image of the woman is from the husband’s perspective more than from the woman’s perspective. From the woman’s perspective, this life was one of constant duty to family, household and community. And while her husband and children respect and honor her, this image doesn’t portray much warmth or intimacy.

For thousands of years, Jewish women recited Proverbs 31 when they lighted the Sabbath candles at dusk on Friday. Jesus’ mother would have had this poem about the Virtuous Woman in mind from earliest childhood.

Although Proverbs 31 is held up as a model of the virtuous woman, what we actually have is a general template of faithfulness to God. The same qualities would be expected of a godly man. The woman described in Proverbs is a portrait of ideal womanhood, but the focus of this portrait is a woman’s relationship with God, not her abilities or her efficiency as a homemaker. The Proverbs 31 woman realizes that her strength and her value come from God.