Of Lions and Downton Abbey


This shard dates to the Ramesside Period, Dynasties 19–20 (ca. 1295–?1069 B.C.). The hieratic writing above the lion reads: "The slaughter of every foreign land, the Pharaoh—may he live, prosper, and be healthy." This may have been a votive offering.

The rulers of the Ramesside Period were well known for their personal piety and their tombs were not the traditional T-shaped private tombs as found in earlier dynasties, especially at Thebes. These tombs were instead mortuary temples with emphasis on religious themes.


This ostracon was found in the Valley of the Kings during excavations conducted by Howard Carter for the 5th Earl of Carnarvon, who was the chief financial backer of many of Carter's Egyptian excavations. Gaston Maspero, then Director of the Antiquities Department, proposed to Lord Carnarvon that Carter might be an appropriate assistant. George Herbert's country house, Highclere Castle, serves as the location of the television series Downton Abbey, though the downstairs scenes are filmed on a set in London, as Highclere's basement is the home of Carnarvon's Egyptian collections.

For the Egyptians, the king was a "son" of Re the Creator, and was under divine appointment to rule the peoples with equity. The king was to maintain order in the world and to protect Egypt against her enemies. Horus, the Son of Re, was the patron of the rulers of the Nile Valley. Horus was regarded as the fixer of cosmic boundaries and the one who directs the currents and winds.

Among the Nilotic Luo, piny horu (soft h) refers to the dawning of a new day. Horu refers to Horus of the two horizons, the son of Re, in ancient Nilotic mythology. Horus was said to have set the rising and setting of the sun. The temporal sacred center was high noon when the sun rested exactly over the Nile. this is depicted by the Egyptian Akar, an image of twin lions (ruti) carrying a sun disk on their backs while facing opposite directions. 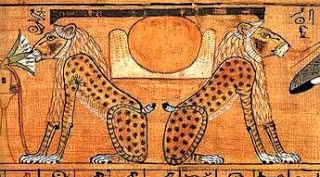 Akar relates to the solar arc, the sun's big stride over the earth, a sign of the Creator's sovereignty over all. The two lions referred to as ruti are still called ruti/rute/rude in modern Luo which means twins or things coming in twos.

Jacob refers to his son Judah as a Gur Aryeh גּוּר אַרְיֵה יְהוּדָה, which means "young lion" (Gen. 49:9). The totem of Shobal's clan was the lion fierce in it youthful strength (young lion). Shobal was one of the Horite chiefs named in the Genesis 36 king list.

Psalm 91 is a Messianic passage that speaks of the victory of the Righteous One. Here we find a reference to the serpent (cf. Gen. 3:15) and the lion. "They will bear you up in their hands, That you do not strike your foot against a stone. You will tread upon the lion and cobra, The young lion and the serpent you will trample down. "Because he has loved Me, therefore I will deliver him; I will set him securely on high, because he has known My name.…" (Psalm 91:12-14)

Related reading: The Fatted Calf; The Red Heifer; History of Egypt, Babylon, Syria by Gaston Maspero; The Lion and Judah; Ancient Egyptian Lexicon: "Out of Egypt have I called my Son.” Hosea 11:1; King Tut and the Dispersion of R1b

Psalm 91 would indicate the possibility of a young lion, fierce in its youthful strength.

However, the information posted at the Metropolitan Museum says concerning this ostracon, "trial sketches made to facilitate an artist's work, the subject depicted here is not found in royal tombs, nor do the figures conform to the strict proportions of a formal rendering."