The Killing of Abel 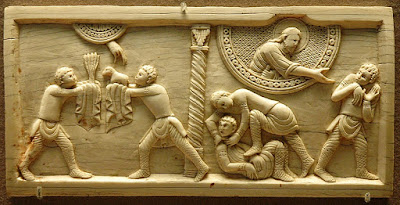 Note that the Genesis text does not mention what Kain said Abel beforehand, nor what Abel answered. Is it possible that Abel did not pay attention to something his brother told him? Perhaps Kain had warned Abel not to trespass upon his territory.

The story of the killing of Abel involves a fascinating interplay between the words kan and gan. The Akkadographic value of gan and kan is the same (see page 21), and both words refer to a field or plot of land. The Akkadian word kan also refers to blood, suggesting a play on words: Abel's blood (kan) cried to God from the field (kan).

As a shepherd, Abel would have been a man of the fields. Apart from the Akkadian association of field and blood (kan), the word "field" in this passage seems benign, so what precipitated the killing?

The idea of two offerings, one accepted by God and the other rejected, is likely a later embellishment. It serves the purpose of a later source. If we remove this detail, a different picture emerges.

Some have speculated that Abel's flocks trespassed on Cain's land and an argument ensued. Or Kain may have enticed Abel to enter a region over which Kain exercised control.

For Abel, entering the territory of an angry older brother may have been a deadly mistake. This interpretation is supported by the Hebrew word sadeh which means field, territory, or country.

The theme of a younger brother entering the territory of an older brother is found in the story of Jacob returning to Edom where Esau ruled as Isaac's heir. Though Esau went out to meet Jacob and greeted him hospitably, Jacob was wise to not settle in Esau's territory.

Among ruling families, the older brother's claims are taken seriously. To insure that Isaac was established as the ruler over his father's territory in Edom, Abraham took two important steps. He gained a second wife for Isaac in the person of Rebekah, Isaac's patrilineal cousin bride; and he gave gifts to his other sons and sent them away from Isaac (Gen. 25:6).

Is there evidence that Kain was a ruler over a territory? Yes, there is abundant evidence.

The name of Cain's firstborn son (Gen. 4:17) is Enoch which is related to the Nilo-Saharan word anochie or anochi, meaning "one who is to follow" as an heir to the throne. Among the Igbo, anochie means “a replacer” or “to replace.” A Nigerian anthropologist reports that, "Anochie means direct heir to a throne."

Cain was a city builder (Gen. 4:17) and cities were built by rulers. He named the city after his son Enoch.

Cain's wife named their first-born son after her father, which was the pattern among Abraham's ruler-priest ancestors.

By the time that Jude wrote his epistle (c. 68 AD) Cain was solidly established as the archetype of an earthly ruler. Jude warns those who might abandon Christ that God punishes those who rebel against Him. He uses three men as examples: Cain the ruler, Balaam the prophet, and Korah the priest.

King Solomon was visited by a great queen of the royal house of Sheba. Her title was Kandake (rendered "Candace" in English). Kandake is not a proper name. It is a royal title and the female counterpart to Kain/Kan.