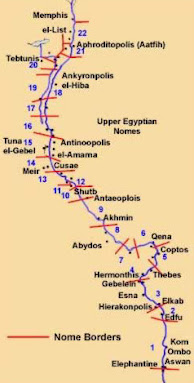 The “Instruction of Amenemope” (Amen-em-Apt or Amenophis) is a wisdom text composed in Ancient Egypt during the Ramesside Period (1300-1075 BC). The full text has been preserved in the British Museum (B.M. 10474). It contains thirty chapters of advice and exhortations for young men to be humble, to avoid conflicts, and to gain favor in the royal court. This is clear from the Introduction:


The beginning of the instruction about life,

The guide for well-being,

All the principles of official procedure,

The duties of the courtiers;

To know how to refute the accusation of one who made it,

And to send back a reply to the one who wrote,

To set one straight on the paths of life,

And make him prosper on earth;

To let his heart settle down in its chapel,

As one who steers him clear of evil;

To save him from the talk of others,

As one who is respected in the speech of men.


The writer was the scribe Amenemope, son of Kanekht. Amenemope had a son named Horem ma'akheru, meaning “Horus justifies.”

Amenemope lived in Akhmim, the capital of the ninth nome of Upper Egypt (shown on map above). Akhmim was also known as Ipu,/Ipw or Khent-min/Hnt-mnw. The principal temple there was dedicated to Horus. This was a Horite Mound.

In 1922, E.A.W. Budge noted parallels between the "Instruction of Amenemope” and Proverbs 22:17-24. He wrote “The Teaching of Amen-em-Apt, Son of Kanekht” in 1924. Proverbs 22:20 says, “Have I not written for you thirty chapters of advice and knowledge, to make you know the certainty of true sayings, so that you can return with sound answers to those who sent you?”
The reference to thirty (sheloshim) chapters harkens back to the wisdom of Amenemope which also has thirty sections: “Consider these thirty chapters, they give pleasure, they instruct.” Ten of the thirty sections of Amenemope's text have parallels in Proverbs 22:17-24:22.

Proverbs 23:1-8 addresses courtly table manners. This appears to be a common theme when instructing young men in how to gain success as courtiers. A similar text is found in the Maxims of Ptah-hotep. Formal dinners were headed by a superior official who showed favor to his underlings by giving them greater portions of food. Genesis 43:34 says that Joseph filled his brothers’ plates with food from his own table, and Benjamin's portion was five times larger than any of the others.

Related reading: The Teaching of Amenemope and its Connection With the Book of  Proverbs; Wisdom is Expressed in the Practical
Posted by Alice C. Linsley at 10:17 AM