An Anthropologist Looks at Genesis 1 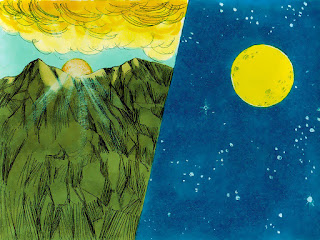 The phrase "In the beginning" is common in African creation stories and songs, such as this song of the Mbuti Pygmies:

In the beginning was God

Tomorrow will be God.

Who can make an image of God?

He has no body.

He is as a word which comes out from your mouth,

That word! It is no more,

It is past and still it lives!

The Akan of Ghana tell this story: “In the beginning the heavens were closer to the earth. First man and first woman had to be careful while cultivating and grinding grain so that their hoes and pestles would not strike God, who lived in the sky. Death had not yet entered the world and God provided enough for them. But first woman became greedy and tried to pound more grain than she was allotted. To do this, she had to use a longer pestle. When she raised it up, it hit the sky and God became angry and retreated far into the heavens. Since then, there has been disease and death and it is not easy to reach God.”

This narrative is told by the Fang of Central Africa: “At the beginning of Things, when there was nothing, neither man, nor animals, nor plants, nor heaven, nor earth, nothing, nothing, God was and He was called Nzame.”

A Bantu account is similar: “In the beginning there was only darkness, water, and the great god Bumba."

Of the beginning, the Gikuyu of Kenya say, "There was no sunlight... the whole land was in darkness."

The Egyptian creation story closely parallels Genesis 1:1: “In the beginning there was only the swirling watery chaos."

Another common theme among Africans is the power of the divine word to generate life. The Nilotic Luo have a saying: Wach en gi teko which means "a word has power."

The Bambara bards of Uganda recite this song in praise of the divine Word:

The Word is total:

It excites or calms souls.

Another African theme is expressed in the merism "the heavens and the earth...", meaning all things. All created entities owe their existence directly to the Creator. Among the Luo, Jachwech piny gi polo means the "Creator of earth and heaven."

Abraham’s Nilotic ancestors believed that the Creator created alone. In ancient Egyptian texts, God declares, "I cast a spell with my own heart to lay a foundation in Maat. I made everything. I was alone. I had not yet breathed the divine one Shu, and I had not yet spit up the divine one Tefnut. I worked alone."

The concept of “Maat” involves equilibrium and harmony between constituent parts, including the cycle of the seasons, celestial and planetary movements, honesty in social and business interactions, and justice.

Contrast the African picture of God’s direct act of creation to the Babylonian "Epic of Creation" in which Marduk creates. He is created to defend the divine ones from attack by the sea goddess Tiamat. Marduk offers to save them on the condition that he be appointed their permanent ruler. The gods agree to Marduk's terms. Marduk kills Tiamat and he fashions the earth and the skies from her severed corpse.

The Somali called the Creator Eebe, and Eebe's divine messenger was Huur, another name for Horus. In Luo, Horu' mo (horumo/orumo) means perfected, realized, finished, or completed. Other peoples of Somalia call the Creator Waaqa Tokkicha, meaning “the one God.”

God separated the sea and the dry land.

Among the Nilotic Luo “Dog Nam” refers to the great water or the waters of creation. Luos consider God to be present at any great body of water, especially Lake Chad, the Nile, and Lake Victoria.

According to some mythologies, the Nile was where the work of creation began when the Creator caused a mound to emerge from the primal water. The emerging dry land called Tatjenun.

In the Egyptian Coffin Texts (2000 BC) we read, "I was the one who began everything, the dweller in the Primeval Waters. First Hahu emerged from me and then I began to move." Ha-hu (ruach in Hebrew) is the wind or breath of God that separated the waters above from the waters below and the dry land from the seas.

The waters were called Nun, a word found among the Horite Hebrew chiefs. Joshua bin Nun is an example. Nun represents the cosmic waters of the firmament above and firmament below (Gen.1:6). In Heliopolitan cosmology the watery realms were connected by the great pillars of the temple of Heliopolis (Biblical On).

Land is created through volcanism. The ancients observed this and attributed it to God’s actions. The rising mounds were called pillars and the Hebrew conceived on earth resting on pillars." I Samuel 2:8 says, "For the pillars of the earth are the Lord’s and he had set the world upon them." Many volcanic eruptions took place under the sea. Imagine volcanoes rising from the sea. These are the "pillars of the earth" described in Psalm 72, Job 9:6, and I Samuel 2:8.

Job 9 speaks of God "Who shakes the earth out of its place, and its pillars tremble.”  Among Abraham's Nilotic ancestors the mounds that emerged from the sea were called TaTJeNuN which appears to mean "twin pillars of God in the water."

Pillars marked sacred places and royal tombs. Ancient temples such as the one at Karnak have entrance halls filled with massive pillars. In the Ugaritic creation story the twin mountains are indicated by the sign T. The mountains Trgzz and Trmg emerged from a universal ocean and held up the firmament.

In the beginning God created the heavens and the earth.
God created time, space, and matter.