An Anthropologist Looks at Genesis 7 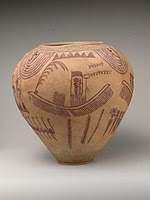 In the Genesis 7 narrative Noah is told to bring seven pairs of “clean” animals onto the ark. This reflects the priestly concern for ritual purity and differs from the Genesis 6 account in which Noah is told to bring one pair of each animal onto the ship. However, the archaeological evidence suggests that Noah was not concerned with ritual purity. His concern appears to have been the preservation of the animals in his royal zoo.
Proto-Saharan rulers such as Noah kept ménageries of prized bulls, hippos, elephants, baboons, and wildcats. The account of Noah saving animals aligns well with the archaeological and anthropological evidence.

The oldest known ménagerie (c.3500 B.C.) was discovered at Nekhen where rulers provided burials for their animals. The animals exhumed in the city’s elite cemetery received similar mortuary treatment as humans. These animals had been well tended, as evidenced by bone fractures that would have required medical care to heal properly. Nekhen has more animal burials than any early Nile Valley urban center.

It is believed that the rulers kept exotic animals as symbols of their power and wealth. Syrian bears were brought to Egypt during the 5th Dynasty. Athenaios of Naucratis reports that a white bear was housed by Ptolemy II in his private zoo at Alexandria. At his royal estate in Nubia, Akhenaten kept lions in domed buildings, antelopes in pens, and cattle in an enclosure made of sticks and branches.

Only eight humans were on the ark. The source of this account would have us believe that Noah had only one wife, and each of his sons had only one wife. This is not consistent with the evidence of early Hebrew rulers with two wives.

The waters are said to have covered all the high mountains, destroying all living beings except the creatures on the ark. This reflects the Deuteronomist Historian’s belief that God destroyed all the unrighteous and ritually unclean. This source is from the Neo-Babylonian Period (700-530 B.C.), 3000 years after the time of the historical Noah.
The biblical Noah is patterned after ancient accounts of righteous heroes who alone are saved in a time of divine judgment on their people. Those include the Gilgamesh Epic in which the hero Utnapishtim sends out birds and offers animal sacrifice which the “gods smelt” as a sweet savor (cf. Gen. 8: 6-21). Utnapishtim’s ship lands on a mountain called Ni'mush, which means "the serpent." In ancient Near Eastern cultures the serpent was a symbol of life, health, and immortality. Here we find a trace of this belief. Archaeological evidence and ancient literary texts indicate that a snake staff, such as the one held by Moses in the wilderness, was associated with healers and healer-priests.
In the “Eridu Genesis” (c.1600 B.C.) the High God An and his son punish the regional Near Eastern population by bringing a destructive flood. Enki helps the ruler-priest Ziusudra to escape.
Related reading: An Anthropologist Looks at Genesis 8; An Anthropologist Looks at Genesis 6; The Serpent on Moses's Staff; The Shrine City of Nekhen, Hebrew Rulers with Two Wives; Leopard Burial at Nekhen; INDEX of Topics at Just Genesis; Our African Ancestors
Posted by Alice C. Linsley at 8:04 AM