An Anthropologist Looks at Genesis 8

Genesis 8 states that Noah had cattle, and during Noah's time cattle were often transported by boats. Petroglyphs of prehistoric reed boats carrying cattle have been found in the eastern desert of Egypt. The various types: sickle, incurved sickle, square, incurved square, and flared are shown above.

The black mahogany Dufuna dugout (shown below) was found in 1987 in Yobe State (Nigeria) buried 16 feet under clays and sands which alternating sequence showed evidence of deposition in standing and flowing water. The dugout is 8000 years old. By comparison, Egypt's oldest boat is 5000 years old.

Peter Breunig (University of Frankfurt) specializes in African archaeology. He has written this description of the Dufuna boat: “The bow and stern are both carefully worked to points, giving the boat a notably more elegant form”, compared to “the dugout made of conifer wood from Pesse in the Netherlands, whose blunt ends and thick sides seem crude”.

Judging by stylistic sophistication, Breunig reasons that, “It is highly probable that the Dufuna boat does not represent the beginning of a tradition, but had already undergone a long development, and that the origins of water transport in Africa lie even further back in time.” 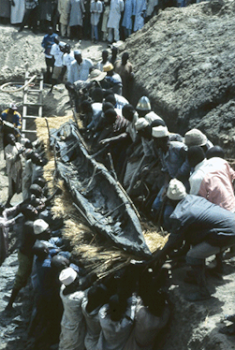 Where did the Ark land?

The Genesis accounts of Noah's flood do not specify a mountain and may not refer to Armenia. That idea is based on a supposition that the word Ararat corresponds to Urartu, the Assyrian name for a ninth century B.C. kingdom in the region of Lake Van.

This view is based on what Josephus wrote in “Antiquities of the Jews” which was cited by Jerome:

“…the ark rested on the top of a certain mountain in Armenia ... However, the Armenians call this place, αποβατηριον 'The Place of Descent'; for the ark being saved in that place, its remains are shown there by the inhabitants to this day. Now all the writers of barbarian histories make mention of this flood, and of this ark; among whom is Berossus. For when he is describing the circumstances of the flood, he goes on thus: "It is said there is still some part of this ship in Armenia, at the mountain of the Cordyaeans; and that some people carry off pieces of the bitumen, which they take away, and use chiefly as amulets for the averting of mischiefs."  (I.3.5-6, translated by William Whiston, 1737)

Berossus was a Babylonian historian and priest (330–250 B.C.) who would have been familiar with ancient flood accounts. Since the early settlements were by major waterways stories of inundations are found among the early civilizations.

Citing late sources such as Berossus, Hieronymus the Egyptian, Mnaseas, and Nicolaus of Damascus, Josephus claimed that the "ark rested on the top of a certain mountain in Armenia, . . . over Minyas, called Baris."

Though Armenia is not mentioned in the Genesis flood account, some claim to have found remnants of Noah’s ark on a mountain in Armenia. Given that the ark was constructed of bundles of reeds, finding it after 6000 years in the damp seasonal changes of the Ararat Mountains is extremely unlikely.

Given the African context of the material in Genesis chapters 1-6 and the fact that Lake Chad is called the “Lake of Noah” by the local people, it is reasonable to consider alternative theories.

Theory 1: The term ararat (Tiberian Hebrew: hārê 'Ǎrārāṭ) is related to the Somali/East African word harada, meaning lakeside. According to this theory, Noah's ark is associated with a lake, not a mountain. Jerome introduced the idea of Armenia in his Vulgate translation of the Greek Bible. He translated Genesis 8:4 to read: requievitque arca . . . super montes Armeniae ("and the ark rested . . . on the mountains of Armenia.")

Theory 2: The mountain is a metaphor for the new creation. Throughout the Bible God interacts with people at moments that mark new beginnings. Abraham finds provision and assurance on Mount Moriah. Moses’s meeting with God in the fiery bush on Mount Horeb involves his appointment to bring the people out of Egypt. The people of Israel receive the law when Moses meets with God on Mount Sinai. Jesus’s transfiguration on the mountain signals the coming of the eternal kingdom.

The word ararat is formed from the triradical RRT in which the T symbolizes a mountain. The reduplicated R symbolizes a high-ranking ruler, or the High God. This archaic symbolism is preserved in the Ugaritic creation story of the twin mountains are indicated by the sign T. The mountains Trgzz and Trmg emerged from a universal ocean and held up the firmament at the beginning of creation.

Noah’s ark comes to rest on a high mountain and there he builds an altar upon which he offers clean birds and clean animal in blood sacrifice to the High God (Gen. 8:20). This fits the overall theme of Noah’s flood as the beginning of a new world and a new covenant.

The motif of mountains as the connection between God and Man, between Heaven and Earth is found in many religious texts. In the Bhagvad Gita, Krishna says, "Among the mountains, I am Meru", that is, the spinal cord of the world. The Vishnu Purana (c.200 B.C.) speaks of seven peaked continents ringed by seven oceans. This cosmology was a mirror image of the seven celestial planets/bowls, following the ancient belief "as in the Heavens, so on Earth."

Given the physics of flood drainage, it is unlikely that a reed ship would come to rest at a high elevation as the waters recede. Stream flows vary depending on the contour and size of the channels, but the draining waters carry floating debris to the lower elevations. Therefore, it would be natural for the Ark to come to rest near a river or lakeside of lower elevation. This also seems to support the mountain as metaphor for a connection between the Creator and Noah as a new Adam.

Theory 3: Place names are conflated or confused due to the passage of many millennia. In his 1874 monograph “Anacalypsis: An Inquiry into the Origins of Languages, Nations and Religions” Godfrey Higgins noted that Ar’menia could mean "mount of Meru… that is, Ar or Er-Meni-ia, the country of mount Meru or Meni."

Josephus quoted Nicolas of Damascus, where he wrote in his ninety-sixth book: "There is a great mountain in Armenia, over Minyas, called Baris, upon which it is reported that many who fled at the time of the Deluge were saved; and that one who was carried in an ark came on shore upon the top of it; and that the remains of the timber were a great while preserved."

The word meni appears only twice in the Bible. In Isaiah 65:11 it is paralleled with the word gad, meaning good fortune. There appears to be a connection between meni and sacrifices at high places because the word gad appears in a context of sacrifices on mountains. Perhaps Noah’s burnt offering was on a mountain or elevated place called Meni.

A variant spelling of Meni appears in Jeremiah 51:27 where God calls on the armies of Ararat, Minni, and Ashkenaz to attack Babylon. Here we note that Ararat and Minni/Meni are regarded distinct regions or ethnicities. Ashkenaz is listed as an ethnicity in Genesis chapter 10.

Theory 4: Noah’s ark landed in Nigeria. This possibility appears more likely when we note the correspondence between place names (toponyms) in Mesopotamia and Nigeria.

Eridu is an archaeological site in southern Mesopotamia. The place name corresponds to Eridu/Eredo in Ogun State of Nigeria.

The Sumerian name for Eridu was Nun ki. Nun also is a place name in Nigeria. The Nun River flows through Rivers State.

Nimrod, a son of Kush, is said to have established a city in Mesopotamia called Erek/Erech. This corresponds to the place names Uruk and Urik in Nigeria.

The Mesopotamian city of Akkad is also known as Akkade or Agade and corresponds to the city of Agade in the Cross River region of Nigeria.

The biblical place name Meni/Minni corresponds to Minni/Minna, the capital of Niger State in Nigeria. Archaeological finds confirm human habitation here beginning as early as 47,000 years ago. Minna is at a low elevation and bounded on the south by the Niger River. The main tributary of the Niger River is the Benue River. Benue means "land of Noah."

The city of Minna is 588 miles (946 km) from Lake Chad, but that distance would have been less in Noah’s time when Lake Chad extended farther to the west. The blue area shows the area of Mega Chad. The green is the present area of the Lake. The Niger River flows from Lake Chad southwest toward Minna. 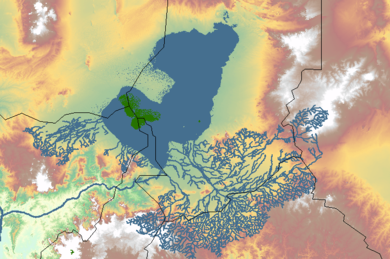 Theory 5: These 6 rivers flow into Lake Chad: Hadejira, Jama'are, Yobe, Komadogu Gana, Ngadda, and Yedseram. These are on the southwestern side of the Lake Basin. As the flood waters receded, ships on those rivers would have moved closer to Lake Chad. Some would have come to ground at lakeside (harada).