An Anthropologist Looks at Genesis 9

The Covenant with Noah

Genesis chapter 9 reiterates the terms of the covenant stated in chapter 6. God blessed Noah and his sons and established his covenant with them and with their descendants. In chapter 9 we find an additional element: a promise that never again will all flesh be destroyed by inundation. The rainbow is the sign of that promise.

In chapter 9 we find an explicit prohibition against consuming blood. Adam and Eve were not to eat of the fruit of the forbidden tree, and Noah and his early Hebrew people are not to eat flesh with the blood in it (Gen. 9:4-6). This echoes the prohibition of Leviticus 17:10-12: “If anyone from the house of Israel or a foreigner living among them eats any blood, I will set My face against that person and cut him off from among his people. For the life of the flesh is in the blood, and I have given it to you to make atonement for your souls upon the altar; for it is the blood that makes atonement for the soul. Therefore, I say to the Israelites, ‘None of you may eat blood, nor may any foreigner living among you eat blood.’”

Some writers (Leon Kass, Yoram Hazony) have suggested that the purpose of Genesis 1-11 is to present a general theory of human nature. However, the matter of blood which both purifies and pollutes has not be explored sufficiently in connection to the early Hebrew. The antecedents of blood anxiety and blood as a symbol of life extend back to a time long before Noah. For at least 100,000 years humans buried their loved ones in red ocher, a symbolic blood covering. The hope for life after death had long been attached to blood and blood symbolism.

Noah is described as a tiller of the ground and a grower of grape vines. This describes a neolithic ruler, not a paleolithic hunter-gatherer.
In the ancient world, wine was consumed mainly by rulers, and it was used by priests in religious rituals. It was offered by kings as a "drink offering" to the High God, and it was consumed at feasts that involved the ratification of treaties. The High God was believed to be the Witness to these treaties. In a Ugaritic text, the God El became drunk at such a feast and had to be carried home by his sons. Here we find a parallel to the story of Noah's drunken state and his sons' attempt to "cover" for him. However, in the Genesis 9 account, Noah became drunk and cursed one of his descendants, negating the covenant of blessing on his descendants (Gen. 9:20-25).
The curse falls on Canaan. This narrative suggesting sexual perversion is imposed by a later anti-Canaanite source. Shem is blessed and Canaan is to be his slave. The source of this account fails to recognize that the lines of Ham and Shem intermarried so that the curse on Ham’s descendants necessarily falls also on Shem’s descendants. 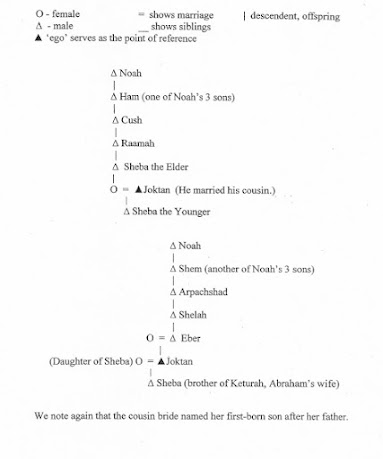 The outcomes of Noah's and Lot's drunken stupors were not good. Genesis presents criticism of excessive wine consumption as this was considered improper for Hebrew ruler-priests. Plutarch wrote that the “priests of the Sun at Heliopolis [biblical On] never carry wine into their temples, for they regard it as indecent for those who are devoted to the service of any god to indulge in the drinking of wine whilst they are under the immediate inspection of their Lord and King. The priests of the other deities are not so scrupulous in this respect, for they use it, though sparingly.”
Abraham's Territory
Another covenant is established with Abraham in Genesis chapter 17. This covenant becomes the basis for later Zionist claims. The narrative that informs Jewish identity as historically connected to the Land of Israel (“Eretz Israel”) begins with the calling of Abraham who is portrayed as the first Jew. However, the Bible designates Abraham as Hebrew, and the biblical evidence indicates that Abraham’s early Hebrew ancestors came out of Africa. By Abraham’s time they were dispersed among many ethnicities and living in city-states and kingdoms, some of which are named in Genesis chapter 10.
Abraham's north-south territorial boundaries were marked by his wives' settlements. Sarah resided in Hebron and Keturah resided in Beersheba. His water rights appear to have extended on an east-west axis from Ein Gedi to Gerar. 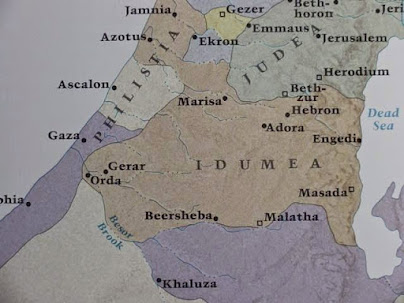 Note that both Hebron (Sarah's settlement) and Beersheba (Keturah's settlement) are in Idumea/Edom. Abraham's territory extended between the settlements of his two wives and in Greek was called Idumea, meaning "land of red people." The region was called Adamu in ancient Egyptian, a reference to the color of blood.
Related reading: The Marriage and Ascendancy Pattern of Abraham's People; The Pattern of Two Wives; Hebrew Rulers with Two Wives; The Antiquity of the Edomite Rulers; An Anthropologist Looks at Genesis 8; Our African Ancestors