An Anthropologist Looks at Genesis 10

The author of Genesis 10 connects the populations of his time period to the three sons of Noah. He proposes how Earth came to be repopulated after a worldwide flood (Gen. 10:32). Though a naïve conception of human history and diversity, this early ethnography is remarkable. E.A. Speiser described the Table of Nations “as a pioneering effort among the ethnographic attempts of the ancient world.” (The Anchor Bible Commentary on Genesis, p. 71.)

The names listed in Genesis 10 represent ethnicities, city-states, kingdoms, and regional populations. The populations may generally be classified as Nilotic, Arabian, Mesopotamian, Eurasian, and Levantine. The table artificially lists seventy populations. However, none of the populations are identified as castes and the ancient world had many castes: tanners, metalworkers, priests, etc.

The English word “Hebrew” is derived from the ancient Akkadian word for priest abru, and the ruler-priest caste was called Abrutu. Variant spellings include Habiru, Hapiru, and ‘Apiru. There is no reason to dismiss Noah and his sons as Hebrew. Genesis 4-11 chronicles the Hebrew caste’s dispersion out of Africa in the service of kingdom builders and high kings. Hebrew were living in Africa, Arabia, Mesopotamia, and Southern Europe before the time of Abraham. There is evidence that some Hebrew settled in the Indus Valley, and that their influence extended as far east as present-day Cambodia. Horite symbolism has been found at Angkor Wat. "Anghor Wat" refers to the settlement or temple complex dedicated to Horus. Ankh-Hor means "May Horus Live!" or "Life to Horus!" 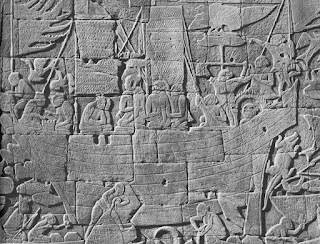 This Anghor Wat relief depicts Ra's solar boat with Horus perched as a falcon on the mast.
The Indian archaeologist B. B. Lal contends that several megalithic sites of ancient Nubians resemble the cemeteries of early Dravidians found all over Western India. The similarities extend from the subterranean structures found near them to the identical earthenware ring-stands used by the Dravidians and Nubians to hold pots.
The connection between the riverine civilizations of the Nile Valley and the Indus Valley is indicated by comparing the Nilotic and Indus pottery inscriptions in which 17 figures are virtually identical. 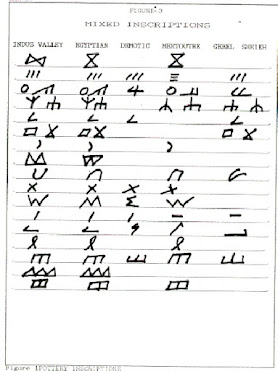 The Hebrew Movement Out of Africa


Genesis chapter 10 continues the theme of an eastward movement out of Africa. Adam and Eve went east. Cain went east, and now we read about the dispersion of Noah’s descendants into areas outside of Africa. This aligns with genetic studies of peoples coming out of Africa through the Middle East, a staging area for the Neolithic Agricultural Revolution, and the region where the earliest known kingdoms were established. This is especially evident in the case of the Kushite kingdom builder Nimrod (Gen. 10: 8-12).

Nimrod is also spelled Nimrudj or Nimrwd. In 2010, the 4400-year tomb of a purification priest named Rudj-ka or Rwd-Ka was found at Giza. It dates to between 2465 and 2323 B.C. His high status is evident in the quality of his stone tomb. He served Pharaoh Khafre who ruled from 2520 to 2494 B.C., before the time of Abraham. The ancient Egyptian word rwd/rudj means ball, sphere, or the Earth.

Likewise, the name “Lot” is found among the Libyan rulers of the Nile: Takelot I (885–872 B.C.) and Takelot II (860-835 B.C.), and at least two were called Nimlot. An inscription on the statue of Nimlot B describes him as “Nimlot true of voice,” meaning justified. The ancient Egyptian is Maa Kheru (mꜣꜥ ḫrw), a typical epithet applied to the righteous deceased who Horus presents to the Heavenly Father.

Nimrod, a son of Kush, built a kingdom in Mesopotamia. He is the connection between the Proto-Saharan ruler Noah and Abraham. We first meet Abraham in Mesopotamia because he is a descendant of Nimrod. 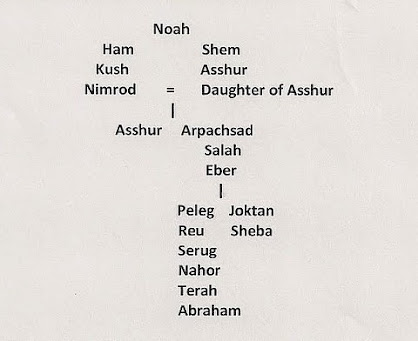 After the Last Glacial Maximum (LGM) population movements created a striking genetic mosaic with distinct sex-based genetic differentiation. Y-DNA traces genetic inheritance through the paternal line and mitochondrial (mt) DNA traces genetic inheritance through the maternal line. Were it possible to study DNA from the different peoples listed in Genesis 10, we would find that the majority could be classified in Y-DNA Haplogroups R1a, R1b, and J, and mtDNA Ls, M, N, H, and R.

Genetic studies have established a connection between some populations of Genesis 10 and some populations of Noah’s homeland in the region of Lake Chad. This map shows the range of Y-DNA R1b peoples in red. However, the dispersion of the R1b populations took place long before the time of Noah and was complete by 40,000 years ago.

Towers Were Used for Astronomical Observations

Although the Tower of Babel story does not specifically mention astronomy, commentators on Genesis 10 often introduce speculation about astrology, an occult practice. This is based on a false belief that the science of sidereal astronomy had not yet developed. However, astronomy was familiar to the Nilotic Hebrew, as noted by Plato who studied under a Nilotic priest for 13 years. Plato claimed that the Africans had been tracking the heavens for 10,000 years. He knew about Earth's Great Year, also called the "Platonic Year." This is the duration of time that it takes for Earth to complete the cycle of axial precession (approximately 25,000 years). This precession was known to Plato who defined the "perfect year" as the return of the celestial bodies (planets) and the diurnal rotation of the fixed stars to their original positions.

In 241 B.C., the priest Manetho reported that Nilotes had been “star-gazing” as early as 40,000 years ago. By 4245 BC, the priests of the Upper Nile had established a calendar based on the appearance of the star Sirius and had been tracking this star for thousands of years, connecting it to seasonal changes affecting the Nile Valley. Doubtless, the Hebrew priests living in Mesopotamia were recognized for their astronomical observations from fortified high places and towers.

Related reading: An Anthropologist Looks at Genesis 9; Noah's Sons and Their Descendants; Haplogroups of Interest to Biblical Anthropologists; Was Akkadian the Language of the Indus Valley Civilization?; Our African Ancestors