An Anthropologist Looks at Genesis 11 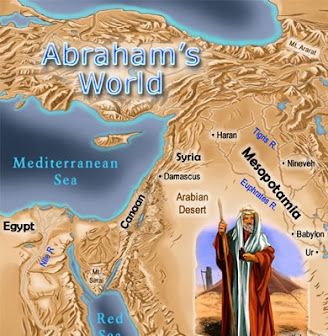 In this series we have tracked the eastward movement of the early Hebrew out of Africa and demonstrated that the themes and customs found in Genesis chapters 1-11 are consistent with what is known about the early populations of the Green Sahara, the Nile Valley, and Canaan.

Genesis 11:2 states that some of Abraham's ancestors migrated from the east to the Tigris-Euphrates basin. Clearly, the early Hebrew were widely dispersed before Abraham's time. However, we first meet Abraham in Mesopotamia because that is where his Kushite ancestor Nimrod established his kingdom.

Chapter 11 provides a transition to the subsequent focus on Abraham the Hebrew who left Mesopotamia for the land of Canaan. He came from the east and eventually established himself in a territory that extended between Hebron to Beersheba.

Genesis 11:10-32 provides a list of some of the Hebrew ruler-priests who descended from both Shem and Ham, though only Shem is mentioned in Genesis 11:10. The lines of Ham and Shem intermarried as did their ancestral lines of Cain and Seth. Though Asshur is not named in Genesis 11, he is listed as a son of Shem in Genesis 10:21. The diagram shows how Abraham is a descendant of both Ham and Shem. 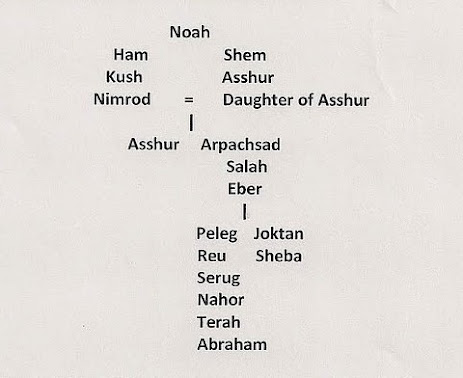 Note that there are two named Asshur: Asshur the Elder and Asshur the Younger. Here we have further evidence of the cousin bride’s naming prerogative. The pattern is evident also in the naming of Terah's son Nahor after his maternal grandfather, Nahor the Elder. Some of the descendants of Nahor the Younger are listed in Genesis 22:20-24.

Nahor the Younger ruled over Terah's territory in Mesopotamia after Terah died in Harran. Abraham became a sent-away son whose marriage to Keturah of the royal house of Sheba helped him to become a ruler in ancient Edom.

Linguistic diversity is expressed in the different names for the High God and His Son.

After the flood, God resorts to scattering humans by confusing their languages, as if by magic. Suddenly, there are many languages and the words that once were understood by all are now incomprehensible to many.

The focus on the tower in Shinar, presumably a ziggurat (Akkadian: zaqâru, "to rise high") indicates a Neo-Babylonian source. The principal ziggurat of Babylon was called “En-temen-An-ki” which means "Royal foundation of [the High God] An on earth". Among the Hebrew of Mesopotamia, God Father was called Ani/Anu and his son was Enki, meaning “Lord over the earth.” Among the Nilotic Hebrew God Father was called Ra and his son was called Horus from the ancient Egyptian HR, meaning "Most High One". Hebrew royal priests were associated with the prestigious temples of both Ani/Ra and Enki/Horus. The Hebrew believed in God Father and God Son and they were devotees of Hathor, the mother of Horus.

Genesis 10 attempts to explain ethnic diversity and the dispersion of ancient populations. Genesis 11 offers an explanation of the diversity of languages that emerged from a common earlier language (Gen. 11:1). Though this account is far from scientific, linguists recognize that many of the populations named in Genesis 10 shared common consonant roots (radicals).

The great civilizations and peoples of the ancient world reflect advancements in technology, astronomy, architecture, and warfare. Written and spoken communication between the peoples facilitated trade and the exchange of ideas. Royal scribes were versed in multiple scripts (sipru) and Akkadian cuneiform was in use throughout the Ancient Near East.

Akkadian, the oldest known Semitic language, appears to be a linguistic bridge between some of the older Afroasiatic languages and the Indo-European languages.

The Indian scholar Malati J. Shendge has concluded that the language of the Harappans of the Indus Valley was Akkadian. The Indian linguist Ajay Pratap Singh explains, "Comparisons of Akkadian and Sanskrit words yielded at least 400 words in both languages with comparable phonetic and semantic similarities. Thus Sanskrit has, in fact, descended from Akkadian."

The Bible scholar, E.A. Speiser, found that names taken to be Indo-European were often labeled "Hurrian" only to be identified eventually as Akkadian. E.A. Speiser called attention to Hurrian/Horite personal names associated with Shechem and with other areas whose inhabitants the Bible calls Hivites. Genesis 34:2 specifies Shechem as a Hivite or Horite settlement. He noted the juxtaposition of the Hurrian Jebusites and the Hivites in various biblical references and he concluded that “Hivite” was a biblical term for Horite/Hurrian. Speiser supported his identification of the biblical Hivites with the Horite/Hurrians by reference to Genesis 36:2 and 36:20, where the terms Hivite and Horite are used interchangeably. In Genesis 36:2, Zibeon is called a Hivite, and in Genesis 36:20 Zibeon is identified as a Horite descendent of Seir.

There was no Hurrian or Horite language. The widely dispersed Horites employed the languages of the people among whom they lived. Thus, scholars today use terms like Hurro-Akkadian, Hurro-Urartian, and Canaano-Akkadian.

Related reading: The Marriage and Ascendancy Pattern of the Biblical Hebrew; Royal Sons and Their Maternal Uncles; The Hebrew Hierarchy of Sons; Our African Ancestors; An Anthropologist Looks at Genesis 10

Thanks for your blog. I learn so much from your work!
If I may ask...the peoples you describe, including the ancient Hebrews, believed in God Father and God Son. When/why did that idea cease especially among the Hebrews who some among them later became to be identified as Jews?
Also, did those who believed in God Father and God Son believe in/worship two gods, one greater,one lesser or did they have an idea of a unity, a one God in two persons?
Thanks!
dep

You are asking excellent questions, Dep!

Judaism emerged well after the time of King David (c.1000 B.C.), and it represents a departure from the faith of Abraham the Hebrew. See this:

A study the early Horite and Sethite Hebrew texts reveals that they believed in God Father and God Son and saw them as co-equal in authority. They also expected a third-day resurrection of the son who was called Horus in Greek. Horus is from the ancient Egyptian HR, meaning Most High One. See this: