Adam and Estrangement from God 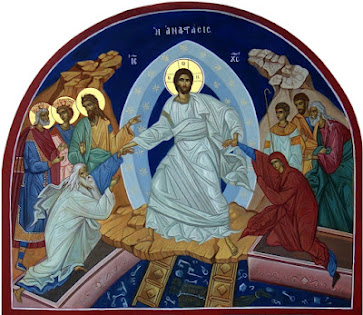 The Risen Lord Jesus raises Adam and Eve from the grave.

The Bible presents Adam in at least three ways: mythical, historical, and analogical. Genesis 1 does not speak specifically of Adam. It speaks of how humans were a special creation, made in the image of the Creator on the last day of creation (Day 6).

We first encounter a figure called “Adam” in Genesis chapters 2 and 3. The word Adam is derived from the root אדם (A.D.M), which is a verb meaning "to be red or ruddy" (Strong’s #119). The text says that Adam was formed from the adamah, meaning ground, soil, or humus. This is the etymology of the term “human”.This Adam is associated with the Garden of Eden, the Tree of Life, and the Serpent who tempted Eve. He and Eve are blamed for humanity’s “Fall” from the state of grace enjoyed in the Garden. We could take this as an historical account. That is how Fundamentalists read the text. However, humans had already dispersed globally before the historical Adam lived (c.4500 BC). Perhaps we should consider the biblical data that speaks of Adam as a father of Cain and Seth, whose descendants intermarried.

According to this view, Adam is a founding parent of the early Hebrew who descend from Cain (Gen. 4) and Seth (Gen. 5). The historical Adam is the eponymous founder of the mound building Horite and Sethite clans which constituted a caste of priests. 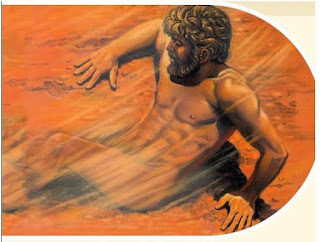 Genesis 5:1 describes Seth as being in the likeness of his father Adam. This may mean that Seth was a red man and could explain why ancient images of Seth show him as a red hippopotamus.
This idea that the first parents caused estrangement from God is a common theme in African stories. The first parents of the Mbiti Pygmy are called Tole and Ngolobanzo.

The first father of the Maasai is known as Maasinta. He had a special relationship with the Sky God who gave the Maasai their first cattle.

Gikuyu and Mumbi are said to be the first ancestors of the Gikuyu of East Africa. Here is a portion of their story:

Now you know that at the beginning of things there was only one man (Gikuyu) and one woman (Mumbi). It was under this Mukuyu that He first put them. And immediately the sun rose and the dark night melted away. The sun shone with a warmth that gave life and activity to all things. The wind and the lightning and thunder stopped. The animals stopped moaning and moved, giving homage to the Creator and to Gikuyu and Mumbi. And the Creator, who is also called Murungu, took Gikuyu and Mumbi from his holy mountain to the country of the ridges near Siriana and there stood them on a big ridge. He took them to Mukuruwe wa Gathanga about which you have heard so much. But He had shown them all the land - yes, children, God showed Gikuyu and Mumbi all the land and told them: "This land I hand over to you, O Man and Woman. It is yours to rule and to till in serenity, sacrificing only to me, your God, under my sacred tree.

While studying tribal peoples in Nigeria, the anthropologist Charles Kraft asked a clan chief, "What did your people believe about God before the missionaries came?" In response, an old chief told this story:

“Once God and his son lived close to us. They walked, talked, ate, and slept among us. All was well then. There was no thievery or fighting or running off with another man's wife like there is now. But one day God's son ate in the home of a careless woman. She had not cleaned her dishes properly. God's son ate from a dirty dish, got sick, and died. This, of course, made God very angry. He left in a huff and hasn't been heard from since." (Charles Kraft, Christianity in Culture, Orbis Books, 1990, p. 153)
Another African story tells how "in the beginning death had not yet entered the world. There was plenty to eat, but a woman became greedy and tried to pound more grain than she was allotted. This required using a longer pestle. When she raised it to pound the grain, it struck the sky and God became angry and withdrew far into the heavens. Since then, people must toil the earth, death and disease trouble the people and it is no longer easy to reach God." (Richard Bush, ed. The Religious World, MacMillan Publishers,1982, p. 38).

In the last two stories the female ancestor is responsible for the estrangement. However, in the Book of Romans, Paul holds Adam responsible for the Fall in his analogical explanation. He contrasts Adam, by whom sin and death entered, and Jesus Christ, the New Adam, by whom sin and death are overcome and justification granted to all who believe (Romans 5:6-10).

“Sin entered the world through one man, and death through sin, and in this way death came to all people” (Rom. 5:12).

“Through the disobedience of the one man the many were made sinners” (Rom. 5:19).
In drawing this analogy, Paul clearly believed Adam to be historical. He argues that both Adam and Jesus Christ acted in ways that had lasting consequences in human history. However, he also admits that his presentation of Adam involves typology. Paul writes that Adam “was a type of the one who was to come.” (Rom. 5:14)
It is clear from the Genesis narrative that both Adam and Eve are culpable. This binary balance between male and female ancestors is characteristic of African stories and the biblical narrative of Adam and Eve.
Adam and Eve serve as examples of estrangement from God. The estrangement results from disobedience and listening to appealing lies. This applies universally, and a similar idea is found in the myths of many cultures.
Related reading: Three Portraits of Adam; Adam Was a Red Man; The Sethites and the Red Hippo; The Father of Adam and Eve; Male and Female are Primary in Hebrew Scriptures
Posted by Alice C. Linsley at 6:14 PM