The Father of Adam and Eve 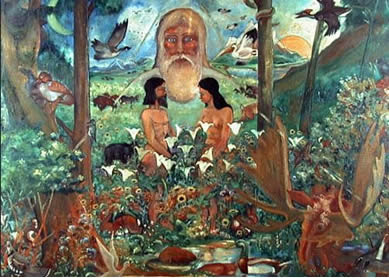 In Genesis, Adam's wife is called Hava (חוה) which is descriptive of her role as the birther (Gen. 3:20). Just as Abraham left his father's house to gain a kingdom which required that Sarah give birth to his proper heir, so Adam was to leave his father and mother and cleave to Eve (Gen. 2:24) that he might establish a line of descendants. His descendants include Ammonites, Canaanites, Edomites, Hittites, Kushites, Midianites, and Moabites.

Who might Adam’s father be in the original context of the Genesis 2-3 narrative? I my view, the Adam and Eve story speaks of African riverine populations of the middle Neolithic Period (6000-3800 BC). In that context God is their father.

Adam describes Eve as bone of his bone and flesh of his flesh, suggesting that she and he may have the same father, as did Sarah and Abraham. As Adam's half-sister, she would have produced Adam's heir, which is Cain as the first-born son. This may explain the royal affix -itti- in Genesis 4: I, where Eve claims to have acquired a man or a ruler with God's help. E. A. Speiser (Anchor Bible Commentary on Genesis, p. 30) believes that the Hebrew qaniti (Gen. 4:1) is in assonance with "Cain" (Qayin). However, the word that appears here is Akkadian, not Hebrew. Iti or itti is an affix that appears with rulers’ names, and in reference to deities. For example, itti šarrim means "with the king." Another example: itti-Bel-balatu means "with Bel there is life." Itti appears in royal names such as Nefertitti. Even today among the Oromo of the Horn of Africa the affix designates persons of high social standing: Kaartuumitti, Finfinneetti and Dimashqitti.

It appears that Cain's mother believed that she gave birth to a ruler. Indeed, Cain is the archetypal earthly ruler throughout the Bible. The Book of Jude warns those who might fall prey to false teachers that God punishes those who rebel against Him. He uses these examples: Cain the ruler, Balaam the prophet, and Korah the priest. 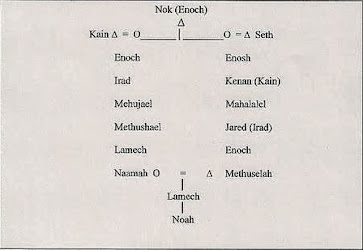 Circles represent the wives of Cain and Seth.

Adam, Eve, Kain, Seth and all their descendants listed in Genesis 4 and 5 are rulers. Their marriage and ascendancy pattern involved marriage to half-sisters and patrilineal cousins. According to the Genesis 4 and 5 kinship analysis (see diagram above), Kain and Seth married the daughters of a ruler named Enoch/Enosh/Enos, and their brides named their first-born sons after their father. Enoch/Enosh is a royal title referring to succession. Enoch is derived from the Ancient Egyptian anochi which is the royal first-person pronoun.

Among the Igbo, anochie means “a replacer” or “to replace” and among the Ashante the word ano kyi means "Ano Junior." In these cases, we find the idea of succession, suggesting royal lineages. A Nigerian philologist friend reports that Anochie also means "direct heir to a throne." Therefore, the biblical name "Enoch" is associated with royal ascendancy. That may explain why the words Enoch and adam are paralleled in Psalm 8:4. Their royal lines intermarried.

"What is man (Enoch) that you are mindful of him,

or the son of man (ben adam) that you care for him?”

If Adam and Eve were half-siblings and first parents of the Hebrew clans, then God is their father. The idea of the Creator being Father to the first parents is found in the stories of many pre-literate societies.

Perhaps Adam and Eve lived in close communion with the Creator for eons before Satan tempted Eve. We tend to think of Adam and Eve as callow youth. Perhaps they did not age physically, but they matured experientially. Why couldn’t they have lived for eons before the fall?

This is a fascinating aspect of the meta-historical view of Adam and Eve. In this view, they are above time and ageless. The Bible presents at least 3 portraits of Adam and this is one of them. It is less about an event in history than it is about an understanding of God that is typically African.

The late Dr. Abraham Akrong, formerly at McCormick Theological Seminary in Chicago, explains: "God in Africa is a relational being who is known through various levels of relationship with creation. In relationship to humanity, God is the great ancestor of the human race. Therefore, all over Africa God is portrayed more in terms of a parent than as sovereign."

Related reading: Three Portraits of Adam; Adam Was a Red Man; The Historical Adam; When is the Evidence Sufficient?; The Science of Biblical Anthropology