No Kingdom by Deception

An inheritance may be gotten hastily at the beginning; but the end thereof shall not be blessed. (Proverbs 20:21)


According to Genesis 25, Esau sold his birthright because he did not value it as much as he valued his stomach. This preaches well as an object lesson for those who aspire to be children of God, but is this a proper application of this passage?

Let's look closely at the text.

29 Once when Jacob was cooking some stew, Esau came in from the open country, famished. 30 He said to Jacob, “Quick, let me have some of that red stew! I’m famished!” (That is why he was also called Edom.)

33 But Jacob said, “Swear to me first.” So he swore an oath to him, selling his birthright to Jacob.

34 Then Jacob gave Esau some bread and some lentil stew. He ate and drank, and then got up and left.
So Esau despised his birthright.

What did Esau exchange for a pot of red porridge? What is meant by the term birthright?

The word rendered "birthright" in English is b'khora in Hebrew.  It is composed of the words barak and khora.  Barak means "blessing" in Hebrew, Arabic and Ancient Egyptian and khora refers to the Horite priesthood. 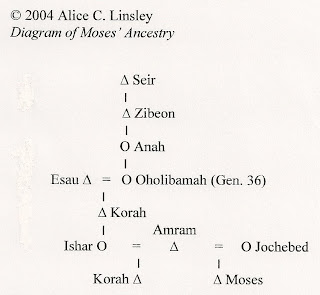 As the twin sons of Isaac's cousin wife, neither Esau nor Jacob were in line to inherit Isaac's territory. By Horite custom, the firsborn son of the cousin wife was heir to the territory of his maternal grandfather. So the birthright from Isaac was not Esau's to sell to Jacob.  There are some serious textual difficulties here.

As the firstborn of Isaac's cousin bride, Esau would be heir to the territory belonging to Rebecca's father. Part of the terrriotry was Padan-Aram.  Padan-Aram is where Jacob was sent by his parents after the first deception failed. There Jacob married two wives.  His wife Rachel stole the teraphim in an attempt to claim her father's inheritance for Jacob according to Horite law.  This is the second attempt at deception in the story of Jacob.  His mother attempted to make Jacob Issac's heir, but this failed.  His wife attempted to make Jacob the heir to her father's kingdom, but this failed also.

Jacob would not succeed in becoming a ruler by deception; only by God's grace, as was true also for his grandfather Abraham and for his descendants Moses and David.

Esau and Jacob are introduced as struggling (vayitrotzetzu) with each other from the womb (Genesis 25:22).  The text tells us that "two nations" (goiim) and "two peoples" (leumim) will emerge. Note that this explanation does not explicitly say from Rebecca's womb, leaving the possibility that these peoples come from Isaac by two different wives. It seems highly unlikely that Isaac did not maintain the marriage and ascendency pattern of the Horites.

Jacob later struggles with the angel of the Lord and gains the name Israel. He is claimed as the founder of the Jewish people, which is problematic since the priesthood of Israel remained Horite in Moses' time.

Esau is not spoken of as one who struggled.  Things seem to have come easier for him as the older brother.  He married a high ranking Horite woman - Oholibamah. Her importance is suggested by the fact that she is mentioned 7 times in Genesis 36.

Esau is a name associated with the Horites of Edom. There are two named Esau in Genesis 36.  Esau the elder married Adah. Their son Eliphaz married Timna, the daughter of the Horite ruler-priest Seir.

Related reading: Issac's Three Sons; Who Was Oholibamah?; Who Were the Horites?; Abraham's Complaint; The Deceiving Worm

I don't get it, though. What (if not his territorial inheritance rights) DID Esau think he was bargaining away in exchange for the mess of pottage that Jacob was offering? His priestly office and the right to wear the priestly "collar" (or, more accurately, his right to wear a distinctive shave-cut) that designated his priestly function?
Likewise, what -- if not rights to a grand territorial possession -- was Rebecca trying to position Jacob for? The inside track to a higher priestly office?
And, then, if both these attempts "failed" (as you say)-- exactly what did they fail to do? Did these attempts both "fail" to upset the transfer of rights according to the customary norms of the people, so that, Esau really DID (technically) inherit the Padan-Aram possessions of Isaac (notwithstanding that he despised his "birthright"), and really DID (technically) inherit the priestly rights that passed through various arrangements, but his spiritual inheritance on this points was somehow defective, because he despised it all?
All this research about Esau's wives is interesting, too, but it still leaves the question hanging: Did Esau, or did he not, deviate in his choice of wives by seeking them out from among the Canaanite people, in defiance of the wishes and ethical/cultural norms of his patriarch forefathers (which were designed with the intention to keep the bloodlines pure and exclusive of Canaanites) -- the view that is customarily held in the Jewish and Christian traditions. Or, are you saying that Esau accepted ARRANGED marriages with Oholibamah, etc., as a normal and RIGHT thing, and God worked a grace through that, notwithstanding that Esau's inner heart attitude was despiteful of his priestly vocation and responsibilities?

You are asking very good questions, Jonathan. I don't have the answers because this passage poses some serious difficulties. Frankly, they may not be resolved.

Esau's marriage to Oholibamah is consistent with the Horite marriage pattern. She was not a Canaanite, but a Horite living within Horite territory. The concern about marrying Canaaite women reflects a much latter period - that of the Deuteronomist. This concern has been imposed on the text and suggests from which source the difficulty arises.