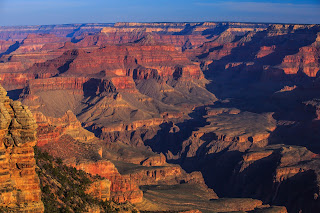 Young-earth creationists believe that the days of Genesis 1 were six consecutive 24-hour days, which occurred 6,000–12,000 years ago. They believe that about 4,300 years ago the surface of the earth was radically rearranged by a worldwide flood. Some sea creatures, and all land animals and birds not in Noah’s Ark perished and were subsequently buried in the flood sediments. Therefore, YEC creationists believe that the catastrophic global flood was responsible for most of the rock layers and fossils. They believe that some rock layers and some fossils were deposited before the Flood and other layers and fossils were produced in localized sedimentation events or processes.

It hardly matters if the days of creation were 24-hour days or thousands of years each. The earth's creation predates the time of Noah by millions of years. Noah lived during the African Aqualithic, when the Sahara was wet. (Noah was a Proto-Saharan ruler who lived about 5000 years ago in the region of Lake Chad.)

Geologists agree that the age of the rock layers that make up the walls of the Grand Canyon range between 270 million years and 1.8 billion years. YEC argues that the Grand Canyon was created with the appearance of age. This begs the question: "Why would God create a deception?"

Notice that YEC focuses on geology. The YEC literature avoids anthropological data, such as the fact that humans were burying their dead in red ocher for at least 100,000 years as a symbolic blood covering in the hope of life after death. (See "On Blood and the Impulse to Immortality" for further explanation.)

Young Earth Creationism either ignores the bulk of human artifacts that are many thousands, even millions of years old, or it attempts to discredit the dating by saying that carbon dating is inaccurate. Of course, scientists use many dating methods. When you are talking about artifacts that are 500,000-800,000 years, even if the dating is off by 50%, the ages are still well beyond the YEC estimate of the Earth's age at 12,000 years. Many thousands of human artifacts have been found that date to over 500,000 years. See this list of some of the more significant finds.

Biblical anthropology is a relatively new science, but it has helped us to understand the context of the creation and origin stories in Genesis. Biblical anthropology has identified the oldest material in Genesis and shown how it connects to ancient African populations. Sadly, this has been ignored in the West. The result is to label the narratives as "myth" or to insist on reading them as literal accounts. (See "The Themes of Genesis 1-3".)
The great challenge is to help people read Genesis in a more empirical way so they can avoid a literal reading where it is not intended and can overcome general ignorance of the material. (See Between Biblical Literalism and Biblical Illiteracy.)
Related reading: YEC and Biodiversity Loss; On the Fall, Mortality, and the Age of the Earth; YEC Dogma is NOT Biblical
Posted by Alice C. Linsley at 9:50 PM