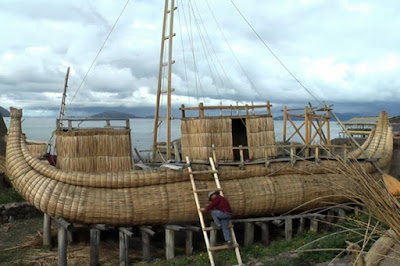 
There is a time honored tradition that associates Noah with the region of Lake Chad. Here we find the territory of Bor-No which means "Land of Noah." It is sometimes spelled Bor-Nu which means "Land of Gold" because Proto-Saharan kings such a Noah had access to the mineral resources of the Upper Nile.

The Sahara known to Noah was a wet place. According to Dr Kevin White, “Over the last 10,000 years, there have been two distinct humid phases, separated by an interval of highly variable but generally drying conditions between roughly 8,000 and 7,000 years ago. Another drying trend took place after about 5,000 years ago, leading to today’s parched environment.”

When Noah lived, approximately 2490-2415 BC, the Sahara experienced a wet period (Karl W. Butzer 1966). This is the period of the Old Kingdom, a time of great cultural and technological achievement. This places Noah and his sons in relatively recent history, not at the dawn of human existence.

The oldest known zoological collection was found in this region during excavations at Nekhen (Hierakonpolis) in 2009. The royal menagerie dates to ca. 3500 BC and included hippos, hartebeest, elephants, baboons and wildcats. Proto-Saharan rulers, like Noah, kept personal menagerie and in a time of flood would have made provision for the animals.

Nekhen is the oldest known site of Horite Hebrew worship. It was a shrine city as early as 4000 BC.

At least 3,500 years before Noah people were using dugouts to navigate the rivers of the Sahara. This is attested by the discovery of an 8000 year old black mahogany dugout in Dufuna in the Upper Yobe valley along the Komadugu Guna River in Northern Nigeria.


Sir Harry Johnston (1858-1927), an agent of British colonial system in West Africa, wrote several books on the history and linguistics of Africa. He makes the earliest reference to Bornu as a version of Borno and connects this region to biblical Noah.

In his 1836 monograph Anacalypsis: An Inquiry into the Origins of Languages, Nations and Religions, Godfrey Higgins noted that the reference to Noah's ark landing in the mountains of Ararat in "Armenia" could mean simply that it landed on "mount of Meru… that is, Ar or Er-Meni-ia, the country of mount Meru or Meni."

Higgins noted the linguistic similarity between Meru and Meni. Meru is spelled Meri in Egyptian and Meri is sometimes spelled Meni, with the n taking the place of the r, in Southeastern Asian languages like Siamese, where the Virgin Mary is called Mania.

Noah's mountain became Meru, the sacred mountain of  Hinduism and Buddhism. According to Buddhist tradition, the island of Sri Lanka broke off from Meru. Many Hindu temples have been built as symbolic representations of Mount Meru with its seven seas and seven surrounding mountain walls.
In the Bhagvad Gita, Lord Krishna says, "Among the mountains, I am Meru", that is the spinal cord of the world. The Vishnu Purana (c. 200 BC) details how there are seven continents ringed by seven oceans. This cosmology was a mirror image of the seven planets/bowls above. Here we have an example of the celestial archetypes about which Mircea Eliade writes in the Myth of the Eternal Return.

The Hindu story may contain a kernel of history. Noah may have settled on Mount Meru, Africa’s fifth highest mountain, located in northern Tanzania. It stands at 15,000 feet and is 42 miles west-southwest of Mount Kilimanjaro, near the Kenyan border.

The Nigerian philologist Modupe Oduyoye observed the Noah-Borno connection in his book The Sons of Gods and the Daughters of Men (1984, Orbis Books). Oduyoye has written here about the African background of Genesis.

New evidence from satellite images reveals that the Nile flooded more extensively than previously thought. The waters spread nearly 100 miles west of the river and created "mega-lakes" in what is today the Sahara desert. (Read more here.)

The Chadic Sea in turn connected to the Benue and Niger River Troughs so that travel and commerce was possible on the major water systems from the Atlantic coast of modern Nigeria to the Nile, the Red Sea, The Arabian Ocean and Indian Ocean. At the time of Noah and his ancestors Cain and Seth, the Sahara was Green.


This is how the historian Roland Oliver has described the Green Sahara: "[In] the highlands of the central Sahara beyond the Libyan desert,... in the great massifs of the Tibesti and the Hoggar, the mountaintops, today bare rock, were covered at this period with forests of oak and walnut, lime, alder and elm. The lower slopes, together with those of the supporting bastions — the Tassili and the Acacus to the north, Ennedi and Air to the south — carried olive, juniper and Aleppo pine. In the valleys, perennially flowing rivers teemed with fish and were bordered by seed-bearing grasslands."

In Noah's time boating and fishing industries were active on Lake Chad. The average fishermen used canoe dugouts which they could carve themselves, but nobles, such as Noah, used boats constructed of marsh reeds lashed together and sealed with pitch. It is likely that Noah had a fleet of such boats.

Proto-Saharan rulers were known to keep ménageries. The animals were kept in pairs so that they would reproduce. Likely these were the animals that Noah preserved by moving them on boats.

Lake Chad was at least 130 feet deeper than it is today and covered an area of about 135,000 square miles (350,000 sq km). The footprint of ancient Mega-Chad has been confirmed by satellite photography. The Nile waters swelled from increased rainfall and cut a deeper and wider flood plain, extending well into Sudan to the west. The area attracted merchants from southern Africa who moved their cargo along the rivers and paid tariffs to the chiefs who controlled the river junctions.

Evidence of the Holocene Wet Period

The Holocene Wet Period has be called the "Gurian Wet Period" and the "African Aqualithic."  The latter term was coined by British archaeologist John Sutton (Journal of Africa History 1974; Antiquity 1977).

Between 10 and 12 thousand years ago the Nile river system filled with waters from the Angolan Highlands, the result of geological uplift which created Lake Victoria and directed its excess flow north in the White Nile. The White Nile provides most of the Nile's water during the dry season.

The Holocene Wet Period owes the abundance of water to climate cycles related to Earth's Great Year, to monsoons off the Indian Ocean, and to the African rifts that created great watersheds or troughs.

Between 12 and 10 thousand years ago, the Nile connected to the Chadic and Niger water systems through a series of shallow lakes in the Sahara Desert. This explains the common plant and animal species found in all three water systems.


The now dry Botswanan lake basin was once a sea filled with water from the Angolan Highlands. Some of Africa's earliest human populations lived on the edges of this great lake and evidenced by thousands of man-made stone tools found there. The tools include mace heads and date to between 80,000 and 100,000 years.

Ancient Accounts of a Wet Period

The chaotic waters is called tehom (Hebrew: תְּהוֹם‎) in Genesis 1 and has a Nilotic origin. It refers to is an ancient concept of a disordered deep God put in order by His Word (Egyptian hu or hut). Tehom is subdued by Tehut. The oldest known moral code is the Law of Tehut which dates to about 5,000 BC.

In Genesis 6:9-11, we are told that Noah was God's favored ruler on earth; "an upright man among his contemporaries." God saw that the earth was corrupt and full of lawlessness and determined to destroy the lawless ones by a great flood.

Genesis 2:10-14 says that Abraham's ancestors lived in a vast wet region which the Bible calls "Eden." It was watered by the Tigris, the Euphrates, the Pishon and the Gihon. The first two are in Mesopotamia and the last two are in Africa. This is the heart of the Afro-Asiatic Dominion which extended from Niger to Pakistan, India, Nepal and Cambodia. This is the place of origin of Abraham's ruler-priest ancestors and of "him that holds the scepter from the house of Eden." (Amos 1:5)

Genesis 2:11 states that the Pishon "flows through the whole land of Havilah." Ha-vilah refers to the head waters or place where the waters originate. It is also the territory of Havilah, a son of Kush (Gen. 10:7). The Kushites lived in the upper Nile region and the Sudan. Kushite kings were the early rulers of Egypt. The Upper and Lower Nile regions were first united by the Kushite warrior-king Menes.

Noah was the great grandfather of Kush. Kush's first born sons by his two wives were Nimrod (Gen. 10:8) and Raamah (Gen. 10:6). They ruled over separate territories in the ancient Afro-Asiatic Dominion. Nimrod ruled in the Tigris River valley. Raamah and his son Dedan controlled the eastern coastal area of the Yam Suph (Red Sea).

DNA studies have confirmed the Kushite migration out of Africa. However, there were already human populations scattered across the earth, especially at the more temporate zones. Some of those populations resulted from earlier migrations out of Africa. The first took place about 120,000 years ago and the second about 70,000 years ago. The Kushite expansion coincided with the spread of the Horite Hebrew religion. In Akkadian texts these priests were called "Abru" which is "Hebrew" in English Bibles.

The climate change that brought gradually drier conditions to what was once a vast wet world is explained in various sacred texts. The dry land swallowed the excess waters. The Koran [11:25-48] refers the earth swallowed the water, and says that Noah's boat came to rest on the mountain Al-Judi."

In Revelation 12 the devil-dragon spews a flood of water to destroy the sun-clothed Woman who bore the Divine Son, but the earth protected the Woman and Child by swallowing the flood. This recapitulates the Genesis 3:15 reference to Woman giving birth to the Divine Seed.

The Extent of the Flooding During Noah's Time

Paul Sereno unearthed 10,000 year old skeletons at Gobero in Niger. These were buried on the edge of a paleolake on the northwestern rim of the Chad Basin. The Gobero site is the earliest known cemetery in the Sahara and the skeletons found there indicated that some were at least 6 feet tall.

According to Sereno, these earlier Holocene people left when it became arid, but the area was repopulated by a taller people around 4600 B.C. when humid conditions returned. Flooding occurred on and off over a long period. Wet conditions prevailed from 7700-6200 (phase 2). Sereno states, "The darkened bone color of all human skeletons in phase 2 burials is indicative of sustained inundation." (Read about Sereno's findings here.)

Another wet period corresponds to the time that Noah would have lived in the region of Lake Chad, between 3000 and 2500 B.C.

There is no evidence that any of these peoples were wiped out by a worldwide flood. The evidence simply does not support the interpretation that all the peoples of the earth were destroyed in a catastrophic global flood and that the earth was repopulated by Noah's descendants.