Ethiopians are described by representatives of the Wellcome Trust Sanger Institute, one of the organizations involved in the study, as one of the most genetically diverse cultures in the world. By studying their DNA, the researchers detected mixing from some Ethiopians and non-Africans dating back to approximately 3,000 years ago.


“The origin and date of this genomic admixture, along with previous linguistic studies, is consistent with the legend of the Queen of Sheba, who according to the Ethiopian Kebra Nagast book had a child with King Solomon from Israel and is mentioned in both the Bible and the Qur’an,” the Institute said in a press release.


As part of their work, which is detailed in the American Journal of Human Genetics, the scientists studied the DNA of more than 200 subjects from 10 Ethiopian and two neighboring African populations, Helen Briggs of BBC News reported on Thursday. Approximately one million genetic letters in each genome were analyzed in what is being called the largest Ethiopian-centered genetic investigation of its kind.

I reserve skepticism about this study.  The oldest common ancestor of the subjects studied would have to date to at least 6000 years ago, about 3000 years before Solomon.

Further, we have no proof that the Queen of Sheba came from Ethiopia. She may have come from the kingdom of Sheba in Arabia. 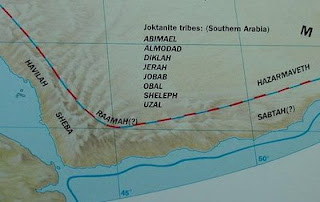 Before the time of Solomon it is likely that Sheba controlled both sides of the mouth of the Red Sea. This is suggested by the archaeological and linguistic evidence connecting Sheba in Arabia to East African settlements.

The connection between Sheba and Jerusalem is evident in the time of Abraham. Melchizedek was the priest-king of Jerusalem and the son of Sheba. It appears that Solomon's sexual liaison with a royal daughter of the House of Sheba was intended to ease tensions after David had Sheba killed at Abel beth Maachah and to add the clout of the House of Sheba to Solomon's dynastic claims.

Now a troublemaker named Sheba son of Bicri, a Benjamite, happened to be there. He sounded the trumpet and shouted, "We have no share in David, no part in Jesse's son! Every man to his tent, O Israel!"

So the Sheba David killed is identified as a Benjaminite, not as a member of the royal family of ancient Sheba. Where then is the proof that he has any connection to the family of the Queen of Sheba other than his name?

Sheba the Elder was a Horite contemporary of the Horite rulers Peleg and Joktan the Elder (Keturah's father).

According to Genesis 10:7 and Genesis 25:3, Dedan was descended from Kush and from Abraham by his cousin wife, Keturah. Dedan's father was Abraham's first-born son Joktan. Dedan's brother was Sheba the Younger. Sheba the Younger was named by his mother after her father, Sheba the Elder.

The Horite ruler-priest clans intermarried exclusively. Being identified as a Benjaminite does not change this. The Benjaminites were also a Horite clan. Being a caste, the Horites practiced endogamy, a trait of castes universally.

The Horite lines intermarried from Genesis 4 and 5 to the time of Jesus. See this:
http://jandyongenesis.blogspot.com/2012/08/the-horite-ancestry-of-jesus-christ_8.html