Then the servant took ten of his master's camels and set out, taking with him all the bounty of his master; and he made his way to Aram-naharaim, to the city of Nahor.  (Genesis 24:10)

Some maintain that the mention of camels in Genesis 24 is an anachronism because camels were not domesticated at the time Abraham lived (c. 2039-1964 BC).

Todd Bolen, professor of Biblical Studies at The Master's College in Santa Clarita, California, notes that camels were used for copper mining in the Negev. "But to extrapolate from that and say they never had domesticated camels anywhere else in Israel in the 1,000 years before that is an overreach."

The petroglyph shown below was found on a rock carving near Aswan and Gezireh in Upper Egypt. This carving depicts a man leading a dromedary camel with a rope. The entire carving was dated to 2345-2181 BC. This places the use of domesticated camels in Egypt at least 171 years before Abraham.

Camels and donkeys were pack animals, used to distribute copper from Timna and from mines in the eastern Arabah. Camels also were used in war in the 9th century BC. This suggests that camels had been domesticated for a significant period of time prior to their cavalry use. 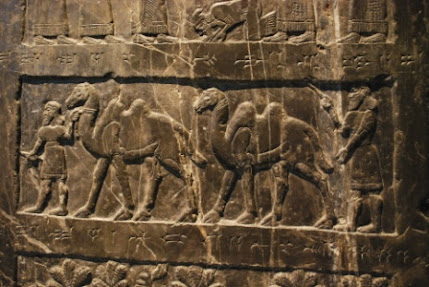 Camels are listed as domesticated animals in a Sumerian Lexical Text from Ugarit (1950-1600 B.C.) and reference to camel’s milk appears in an Old Babylonian text.

Pierre Montet found a 2nd millennium stone container in the form of a camel in Egypt. Parrot uncovered a picture of the hindquarters of a camel on a jar at Mari (2000 B.C.) and found camel bones dating from around 2400 B.C.

Many images of camels appear on rock art in Saudi Arabia. Among the thousands of camel figures carved in rocks throughout the Arabian Peninsula, the ones at Jubbah are believed to be the oldest. They date back to the beginning of the Bronze Age, about 4000 years.

In August 2008, a very old camel jawbone was unearthed in Syria. According to Heba al-Sakhel, head of the Syrian National Museum, the fossil is one million years old.

Paleontologists have evidence that members of the camel family thrived in North America about 40 million years ago. The American Arctic camel, which went extinct at the end of the last ice age, once roamed alongside woolly mammoths, dire wolves, sabertooths, and giant ground sloths.

During the Pliocene warm period, 3 million years ago, camels ranged more widely. Mummified camel bones have been found as far north as Ellesmere Island in the Canadian Tundra.

Camels developed into distinct species before the Ice Age and moved westward across Alaska into western Asia. The two kinds of camels known today likely emerged in Asia. Smaller members of the camel family include alpacas, guanacos, llamas, and vicunas.

Today wild camels still roam parts of Mongolia. Though wild herds no longer are found in Arabia, there would have been wild Arabian camels in Abraham's day. Camels are milked at a camel dairy in Dubai and the vitamin C rich milk is being exported to Europe.

The total worldwide population of camels is thought to be about 18 million. The camel population is divided into 2 categories: approximately 16 million Dromedary (1 hump) and 2 million Bactrian (2 humps). Hybrids of the two species were once found in Asia. These crossbred camels had one extra-long hump and were larger and stronger than either of their parents.

Camels are the perfect pack animals for treks through deserts and arid regions since they can go up to 12 days without any water. They pick their own leader and always follow the "alpha camel" and they always file in the same order.

A Dromedary camel's fur is short and protects its body from the heat. The longer fur of the Bactrian camel may grow to about 10 inches (approx. 25 centimetres) on the animal's head, neck, and humps. All camels lose their fur in spring and grow a new coat. Without its fur the camel looks slender but a thick coat of new fur grows by autumn.

We do not know if Abraham's camels were Dromedary or Bactrian, but it is likely that they were Dromedary camels. Abraham's servant took 10 camels laden with gifts to seek a second wife for Abraham's hair, Isaac. There is urgency in the Genesis 24 narrative as Abraham is nearing death and Isaac's taking of his second wife marked his rising to rule Abraham's territory that extended from Hebron to Beersheba. This explains Abraham's insistence that the new bride should be brought back to his territory.

Camel teams consisting of approximately 70 camels are able to travel between 20 to 25 miles (about 40 kilometres) a day in desert environments. They move at a speed of about 3 miles (5 kilometres) per hour. Teams carry up to 20 tons on their backs. A large bull camel can carry up to 1323 pounds (600 kg) and smaller camels up to 882 pounds (400 kg).

Given this information, we can estimate the weight of the "bounty" carried by Abraham's camels to Padan-Aram. If all ten camels were mature bulls carrying maximum loads, the total weight of the goods delivered would have been about 13,230 pounds or 6000 kilograms.


Related reading:  Archaeology and the Patriarchs; The Beja Metalworkers; Trees in Genesis, Noah's Birds; Arctic Camels Clue to Climate Change?; The Pattern of Two Wives; The Latest Challenge to the Bible: Abraham's Camel's an Anachronism; The Arabian Rock Art Heritage