Marrying that Messiah May Be Born 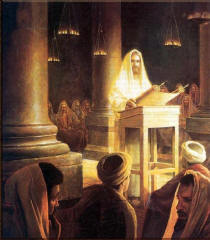 Alice C. Linsley
In the letter disseminated in December 2009, Sephardic Chief Rabbi Shlomo Amar and Ashkenazi Chief Rabbi Yona Metzger noted that approximately 50,000 abortions are performed in Israel every year — 20,000 approved by Health Ministry abortion committees and 30,000 unapproved procedures performed illegally in private clinics. The chief rabbis wrote that abortions, which Judaism permits under certain circumstances, “delay the coming of the Messiah.”
Rabbis recognize that the Messiah is to be a descendant of David and that he is to be born a a Jewish woman. Since they do not recognize Jesus as Messiah, they are waiting. Jewish women having abortions could potentially delay Messiah's coming.

David's Hebrew ancestry comes through Judah and Tamar. He was descended from Tamar, the daughter of a priest who, according to Jewish tradition, was called Melchizedek-Shem. Tamar's punishment, as demanded by Judah, was that set in Lev. 21:9 for a priest's daughter found guilty of prostitution.

David was also of the Hebrew royal line of Ram (Ruth 4:19). Ram is a common name among the ruler-priest lines. One of Shem's sons was named A'ram (Gen. 10:22) and the priestly lines of Aaron and Korah are traced through their father Am'ram.

Jesus' priesthood is "in the order of Melchizedek" and that is said to be an eternal priesthood. Through Melchizedek, the priesthood of God is associated with the Jebusite settlement of Jerusalem. Abdi-hepa was a Jebusite king who ruled Jerusalem three centuries before its conquest by David. This distinguishes the priesthood of God from other priesthoods that do not recognize the ancient prophecies concerning Mount Zion and the House of David. Interestingly, according to 2 Samuel 24, David built a fire altar at the threshing floor of Araunah, the Jebusite. Here David is shown as a ruler-priest and shepherd, the very roles that characterize the ruler-priests whose patrilineal lines intermarried, bringing us to the house of Joachim, Mary's father, who was both priest and shepherd. 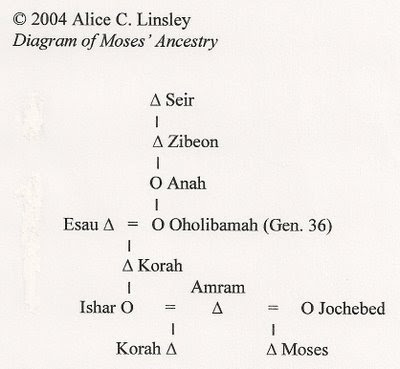 There are 2 main priestly lines from Genesis through the Exodus and these lines intermarried. The lines are those of Cain and Seth, Ham and Shem, Sheba and Joktan, Levi and Judah, and Korah and his half-brother Aaron. Moses' father had 2 wives (see diagram). By Ishar, he had Korah whose name means 'shaved one' and designates a priest of Egypt. By Jochebed, he had Moses and Aaron. So we see 2 lines of priests from Genesis to Exodus.

In the time of David this was the case also. David was consecrated king by Samuel, the son of the priest Elkanah. Elkanah had 2 wives, Hannah and Peninnah (1 Samuel 1:2). We aren't told the identity of Peninnah's first born son, but we can assume that he would have been in line to serve as priest. Since Samuel was Elkanah's only son by Hannah, Samuel was a priest as well as a prophet. That is why he offered blood sacrifice and burnt offerings. But Elkanah's line (through 2 first born sons) was not the only line of priests during David's time. There was also the priest Eli, whose 2 sons acted as priests at Shiloh (1 Samuel 1:3) at the time Elkanah served as priest.


Mary and Joseph, both Horites

Marriage and ascendancy patterns are highly resistant to change. If the pattern survived Egyptian captivity and deportation to Babylon, it surely continued afterwards. In fact, it appears to have continued to the time of Jesus and then stopped, as if the pattern had fulfilled its purpose once Messiah was born.

Applied to Mary and Joseph, this kinship pattern indicates that they were cousins and both of priestly lines. These lines had been intermarrying from before Abraham's time and continued to intermarry up to the birth of Jesus Christ. Joseph's family lived in Nazareth which was the home of the eighteenth division of priests, that of Happizzez (1 Chronicles 24:15).

Jesus' mother's name was named Miriam daughter of Joachim Son of Pntjr (Panther) Priests of Nathan of Beth Lehem. From predynastic times, ntjr designated the ruler among the Kushites. The name Panther or p-ntjr meant "God is King."

It is certain that Mary was of the ruler-priest caste because even those who hated her admit this. Sanhedrin 106a says: “She who was the descendant of princes and governors played the harlot with carpenters.”

Jesus was the Son of God, born to "the Woman" according to the ancient expectation (Gen. 3:15). Mary was the proper bride for Joseph since she was of a priestly line. He too was of a priestly line descending from Judah and Ram, David's ancestors. Joseph of Nazareth married the daughter of a priest as did Joseph in Egypt and Moses in Midian.

Why did Abraham's people preserve this unique pattern of intermarriage between priestly lines? The only explanation is that they really did believe that the expected Messiah would be born of their bloodline. This is what Jesus indicated when he said to the Jewish authorities, "Your father Abraham rejoiced that he would see my day. He saw it and was glad." (John 8:56)

Likewise, John the Forerunner's testimony concerning Jesus as "the Lamb of God that takes away the sin of the world" (John 1:29) springs from direct knowledge of the tradition of his Horim (Horite Hebrew ancestors) that the Son of God was coming into the world to save sinners.

Your research is flawed in so many places, it's not even funny. 1 Sam. 1:1 states that Elkanah was an Ephrathite (of the tribe of Ephraim). He was not a priest or even a Levite. Also, Hebrews 7:10-14 states that Jesus Christ was from the tribe of Judah, and no Judahite ever served as a priest. Jesus is not a priest out of the Levitical order. He is a priest forever after the order of Melchizedek. I read your article because I was trying to find out information about David intermarrying his sons and daughters with the priests, but you have really stretched the truth here. Your comments are 0 so I can only gather that people who have commented on your fanciful interpretation of Scripture are simply deleted.

I'm quite ready to admit that my research is on-going and this article needs to be up-dated. This is research in progress. It would be helpful if you could be specificabout your concern. Perhaps you should read about the origins of the priesthood. It did not originate with Aaron and Aaron and Korah, Moses's brothers were both priests. Even David's sons are called "priests" in 1 Chronicles 18. Priests were royal advisors and scribes.

Priests only married daughters of priests.