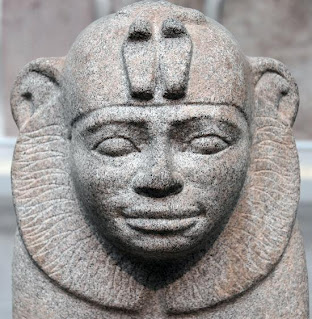 Alice C. Linsley
The Genesis genealogical information indicates that Abraham's ancestors came out of the Nile Valley. The oldest known sit of Horite Hebrew worship is Nekhen on the Nile (4000 BC). Prayers of the Horite and Sethite Hebrew priests are found in ancient texts dating to as early as 2600 BC.
Verification of this comes from many related disciples, but most recently from the archaeological studies of the ancient Sudanese or Nubian rulers, the black pharaohs of Egypt.
These rulers' names have parallels in the Bible. Taharqo is identified as Tirhakah in 2 Kings 19:9 and Isaiah 37:9. Their monuments and royal burial grounds are being studied extensively.
The name Tahar-qo has the Meroitic honorary suffix - qo - as in the names Sheba-qo and Shebit-qo. The last two are linguistically equivalent to the biblical name Sheba, an ancestor of Abraham and his cousin-wife Keturah. Sheba is one of the rulers listed in Genesis 10. He is a descendent of Ham and Ham's line intermarried with the descendents of Shem.
The Sheba-qo Stone, while containing many gaps, reveals a belief in Memphis as the sacred center and the Creator God's residence. Sheba-qo’s double crown is shown on the stone and parts of his Horus name. So, we have evidence linking the House of Sheba and Abraham’s Horite people. Sheba-qo was buried in his ancestral cemetery at el-Kurru which is in Sudan. The prevalent theory is that his Pharaonic burial represents the introduction of Egyptian culture to the Sudan, but it may well be that cultural influences came from Sudan to Thebes and Memphis after Piye united the separate kingdoms.
Piye of Nubia (Piankhy) defeated the armies of Tefnakht of Sais (Twenty-fourth Dynasty), captured Memphis, and subdued the princes of Lower Egypt, restoring the status quo to that area. Piye's Twenty-fifth Dynasty has been the subject of speculation among Egyptologists who do not agree on the timeline of this Kushite succession. All recognize that Piye's successors were Sheba-qo [2], Shebit-qo, and Tahar-qo and they also agree that each ruled from a different shrine city. Why would they rule from different cities? This would not have impressed upon their subjects that their father had forged a single kingdom. Wouldn't the establishment of a single capital city symbolize that unity better than three capitals? The theory that each succeeded to the throne upon the death of the former ruler gives us this timeline: 716 BC: Piye dies; Sheba-qo becomes ruler of Kush and Egypt 710 BC: Sheba-qo moves his capital from Napata to Thebes 702 BC: Sheba-qo revived the office of high priest, which he awarded to his son Hori-makhet who was high priest in Thebes. (Hori is the linguistic equivalent of Horus and Horite. This makes it clear that the term Horite cannot be taken anachronistically.) Sheba-qo dies; Shebit-qo becomes ruler of Kush and Egypt 701 BC: Shebit-qo forms alliance with kingdoms of Israel against Assyrian threat 690 BC: Shebit-qo dies; Tahar-qo becomes ruler of Kush and Egypt; moves capital to Memphis 684 BC: Tahar-qo begins building temple to Amon-Re at Kawa 680 BC: Tahar-qo builds temple to Mut at Gebel Barkal in Nubia 671 BC: Assyrians defeat Tahar-qo and capture Memphis 664 BC: Tahar-qo withdraws to Napata, builds the Nuri pyramid, the first in one 1000 years 664 BC: Tahar-qo dies; buried in largest known pyramid in Sudan.
Based on my kinship research in Genesis, I'd suggest a different scenario, one proposed by Robert Morkot who has written: "It is most likely that there was more than one family group involved in the development of the Kushite state, and that the process was one of mixed military and diplomatic actions cemented by marriage alliances." This assessment is consistent with my findings of 3 ruling priestly clans who intermarry.
Before his death, Piye divided his vast kingdom between his 3 first-born sons. Piye had more than one wife and they are mentioned in his victory stela. This means that he at least two first-born sons. Each was given his own territory when he came of age and the three had overlapping reigns. This explains the separate capitals. Sheba-qo ruled in Thebes, Shebit-qo ruled in Napata, and Tahar-qo (shown above) ruled in Memphis.
The provision of territories for first-born sons predates the Twenty-Fourth Dynasty by about 2000 years. The following statement is found on the Inscription of Pepinakht-Heqaib who lived during the reign of Pepi II (c. 2800 BC): "Never did I judge two brothers in such a way that a son was deprived of his paternal possession." The Pepinakht-Heqaib inscription appears on the 2 jambs of the facade of his tomb on Elephantine Island near Aswan (ancient Swenet/Syene). From the inscription we surmise that this man judged inheritance disputes between brothers and refused to deprive a rightful heir of his paternal possession. (See the Theme of Two Sons, here.)
NOTES
The Assyrians captured Memphis on 11 July 671. Tahar-qo escaped, but one of his brothers and his son were taken captive.
Robert Morkot, The Black Pharaohs, The Rubicon Press, p. 156. 5.
Pepinakht was ennobled (saH) and sanctified a living god (nTr anx) 300 years after his death. As a deified human he was regarded as a mediator between people and the gods.
Elephantine stands at the border between Egypt and Nubia/Sudan. It was known to the ancient Egyptians as Yebu which is the linguistic equivalent of Jebu according to THE DIPLOMATISTS HANDBOOK FOR AFRICA by Count Charles Kinsky. This links Elephantine with the Jebusites who controlled the major water systems in what is today Nigeria. They also held Jebu/Jerusalem during under the rule of Melchizedek and until the time of Solomon.
Related reading:
Posted by Alice C. Linsley at 2:30 AM