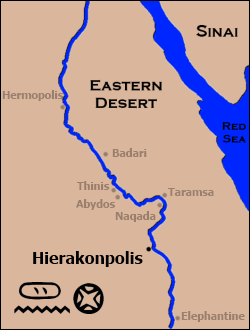 The temple consisted of a large oval courtyard surrounded by a mud-plastered reed fence. The courtyard was paved with multiple layers of compressed mud. This temple appears to be the pattern for later temples as depicted on seals from the First Dynasty.
Votive offerings at the Nekhen temple of Horus (c. 3500 BC) were ten times larger than the mace heads and bowls found elsewhere, suggesting that this was a very prestigious shrine. These included decorated mace heads and hard stone bowls. The temple was a large structure, fronted by huge cedar timber pillars, and it was to become the prototype for temple architecture for many millennia.

Horite priests placed invocations to Ra and Horus at the summit of the fortress as the sun rose. In the morning the priests faced the eastern horizon to greet the rising sun, the emblem of Ra and his son.
Prayers were offered at dawn. This practice continued throughout dynastic Egypt. Moses was told to meet the king early in the morning as he was going down to the Nile to pray.
The primary orientation for the early Horite and Sethite Hebrew was east. The Hebrew word for East is קדם (qedem, Strong’s #6924), from the root word קדם (Q.D.M, Strong’s #6923) meaning "to meet," and the rising sun is "met" each morning in the east.

One of the Chief Inspectors of the Horite priests at Nekhen was Horemkhawef. His tomb has been identified.

Nekhen's sister city was Elkab (Nekheb), on the opposite side of the river. The tomb of Horemkhawef in Nekhen and the tomb of Sobeknakht in Nekheb were painted by the same artist. Further, Hormose, the chief priest of Nekhen, was able to request material goods from the temple at Nekheb for use at the temple at Nekhen. Nekhen and Nekheb were typical twin cities of the ancient world.

A later temple (c.3500 BC) was built within the precincts of the city. The earliest phase of this temple was a circular stone wall surrounding a large mound of sand supported by limestone blocks on which there may have been an Early Dynasty shrine. A number of limestone fragments, likely the footings for large pillars, were found within the stone enclosure wall. The central shrine consisted of three rooms and four 20-foot-high wood pillars. Animals, including cattle, goats, fish and crocodiles, were sacrificed in the oval courtyard.


Many artifacts of great importance have been found at Nekhen. These include funeral masks, statues, jewelry, beer vats, large flint knives, and the pillared halls characteristic of later Egyptian monuments and temples. Nekhen is where the oldest life-sized human statue was found: a priest from the temple of Horus, c.3000 BC.
Charcoal samples found in the tombs of Nekhen date to the Naqada I and II periods and have been identified as cedar from Lebanon.

In 1898 J.E. Quibell and F.W. Green found the macehead of Scorpion II and the macehead and palette of Narmer at the main deposit of the temple of Horus. Also found at Nekhen were a seated red pottery lion and the great gold plumed falcon representing Horus, the son of Ra. Nekhen was named for Horus of the Falcon: Nekheny.

Another fascinating find at Nekhen was the recovery of an almost complete beard in association with the redheaded man in Burial no. 79. The man had long wavy natural red hair and a full beard. This individual may be of the same ethnicity as the red-haired ruler known as Ur-David (shown below) buried in a pyramid in the Tarim Valley of China. 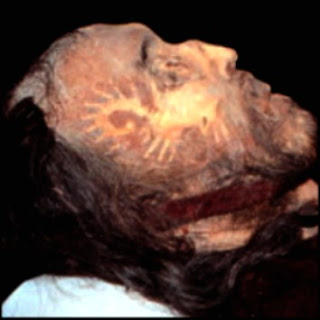 Related reading: Report on Excavations at Elkab/Nehheb; Why Nekhen is Anthropologically Significant; The Substance of Abraham's Faith; The Ra-Horus-Hathor Narrative; 77,000 Years Old Settlement in Sudan; Boats and Cows of the Proto-Saharans; Nekhen News 1998