The Peshitta is a version of the entire Bible read by Syrian Christians.This is the Bible that St. Ephrem the Syrian knew.

In the Peshitta, Noah's Ark landed in the “mountains of Quardu” (Gen. 8:4). Quardu or Kardu is formed from two Akkadian words: kur - land of, and dû - hill. Note the similarity to the Arabic Đū Shará (ذو شرى‎) which means "Lord of the Mountain."

These people of Quardu are described as hill people or cave dwellers. They appear to be related to or associated with the Jats of Punjab, the Gutians (bull people) and the ancient Horites of Edom. Edom was called "Idumea" by the Greeks, meaning "land of red people."

The horns of the bull were a sacred symbol for the Horites. They formed a solar cradle that indicated divine appointment by overshadowing. In this image from Dendura, the sun rests in the horns of the sacred bull. 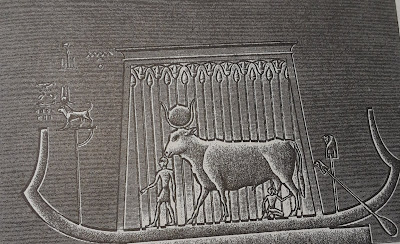 Images of Hathor, the mother of Horus, show her overshadowed. This amulet was found at Hazor. It shows the sun cradled in the bull's horns and rays of light radiating from the sun. 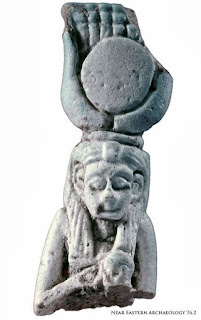 The rulers of Quardu are known to have had red hair, like the Horites of the hill country of Edom. Esau the Red, lived in the hill country of Seir the Horite (Gen. 36). Archaic populations lived along the ridges in rock shelters (kar or kur) and later in fortified shrine cities called "high places" in the Bible. These mountain peoples were in the R1b Haplogroup. The Horite high places are called "Horite Mounds" in the ancient Pyramid Texts


The Peshitta appears to have preserved the connection between the R1b peoples who had dispersed into Turkey and Iran. This represents the eastern tradition of the older African account of Noah, a ruler in the region of Lake Chad.

There appears to be traces of the older account in Arabic. The identification of Noah's Ark with Ararat probably represents a misreading of the Arabic word herarat - حرار  - which means vehemence.  Har-arat, better translated, would mean Mountain of Vehemence. This fits the story of divine wrath expressed in extensive catastrophic flooding. 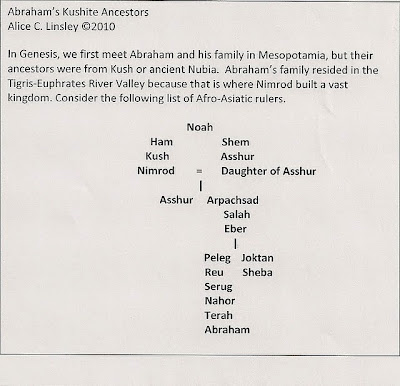 Armenia is likely a corruption of Har Meni, or Mount Meni which means Mountain of God or Mountain of Destiny. Har Meni appears to parallel the term Ararat, which is not a place name, but rather a description of an unknown mountain. The term "ararat" in Arabic means vehemence. Likely, a parallel was intended between har-meni and har-arat; that is between the Mountain of God and the Mountain of Vehemence.

The word "meni" appears in Isaiah 65:11, where it is paralleled with the word gad, meaning good fortune. This suggests a connection between meni and encounters with God on mountain tops because where the word gad appears in the context of sacrifice offered on mountains. We recall that Noah offered burnt sacrifice on the mountain in thanksgiving for his deliverance (Gen. 8:20) and that God established a covenant with Noah and his descendants.

The Gikuyu of East Africa tell this story of the experience of their first parents, Gikuyu and Mumbi:


There was wind and rain. And there was also thunder and terrible lightening. The earth and the forest around Mount Kerinyaga shook. The animals in the forest whom the Creator had recently put there were afraid. There was no sunlight. This went on for many days so that the whole land was in darkness. Because the animals could not move, they sat and moaned with the wind. The plants and trees remained dumb.

It was, our elders tell us, all dead except for the thunder, a violence that seemed to strangle life. It was this dark night whose depth you could not measure, not you nor I can conceive of its solid blackness, which would not let the sun pierce through it.

The wording is like that of an Akkadian flood. The 1646 to 1626 BC account begins with the creation of man and quickly moves to the flood. The saga gives this description: "The flood roared like a bull, Like a wild ass screaming, the winds howled.The darkness was total, there was no sun."


But in the darkness, at the foot of Mount Kerinyaga, a tree rose. At first it was a small tree and it grew up, finding a way even through the darkness. It wanted to reach the light and the sun. This tree had Life. It went up, sending forth the rich warmth of a blossoming tree - you know, a holy tree in the dark night of thunder and moaning. This was Mukuyu, God's tree.

Now you know that at the beginning of things there was only one man (Gikuyu) and one woman (Mumbi). It was under this Mukuyu that He first put them. And immediately the sun rose and the dark night melted away. The sun shone with a warmth that gave life and activity to all things. The wind and the lightening and thunder stopped. The animals stopped moaning and moved, giving homage to the Creator and to Gikuyu and Mumbi. And the Creator, who is also called Murungu, took Gikuyu and Mumbi from his holy mountain to the country of the ridges near Siriana and there stood them on a big ridge.


Here we have language reminiscent of Abraham's encounter on a wild and windy mountain where salvation through the promised Son was revealed to him. William H. Willimon wrote: "The sky darkens, the wind howls and a young man walks up another Moriah, driven by a God who demands everything and who stops at nothing. He carries a cross on his back rather than sticks for a fire, but like Abraham, he is obedient to a wild and restless God who is determined to have his way with us, no matter what the cost."


Related reading: The Substance of Abraham's Faith; Africa in the Days of Noah; Peaks and Valleys; Sacred Mountains and Pillars; The Animals on Noah's Ark; The Historicity of Noah's Flood; What Abraham Discovered on Mt. Moriah

In Assyrian royal inscriptions and prophetic oracles, the king is presented as the son of the goddess
Mullissu/Ištar. Born of a human mother but created by the goddess, he was a semi-divine being partly
man, partly god. In an oracle the goddess declares: “I am your father and mother; I raised you
between my wings.” The mother-child relationship between the goddess and the king is elaborated in
the oracles by portraying the king as a baby suckled, comforted, tended, carried, reared and protected
by the goddess, who now appears as his mother, now as his midwife, wet nurse, or nurse, and
tenderly calls him “my calf” or “my king,” while she fiercely attacks his enemies.48

There great resemblance with some of your articles.

Dr. Parpola's work in Assyrian history, culture and language is excellent. The Assyrian empire, the Akkadian empire, and the Sumerians share many roots linguistically, culturally, and religiously.