Bishop Usher’s dating of the earth at 10,000 years and mankind at 4000 years is terribly mistaken.  Some Bible literalists insist on the accuracy of Usher's dating, though it flies in the face of all the physical evidence.  How do they reconcile a 10,000 year earth with human-crafted tools and ochre plaques dating to 100,000 years?  They argue that radio carbon dating is inaccurate.  Okay, let's say that it is wrong by 50%.  That would mean that the mace heads found in Africa are only 50,000 years old.  That's still 40,000 years older than the literalists say the earth has existed

Adding the life spans of the rulers doesn't provide a "biblical" answer to the age of the earth because the Septuagint, the Masoretic, and the Samaritan texts don't agree on the number of years. The total number of years in the Septuagint and the Masoretic (Hebrew) records agree except in the case of Lamech the Younger (Noah's father). The Septuagint assigns Lamech a total of 753 years, whereas the Samaritan Pentateuch assigns him only 653 years. The Masoretic text assigns Lamech 777 years. Lamech the Elder, the father of Tubal-Kain, isn't assigned an age span.  It is evident that the age of the earth can't be calculated using the lifespans of the rulers listed in Genesis.

Instead, Genesis poses two men as the founders: Adam, the first ruler and Enoch the first ancestor of the historical persons listed in Genesis 4, 5 and 11. We find a clue as to how we are to correctly understand both biblical figures in Psalm 8:4:

Here we see that the historical first ancestor Enoch is paralled with the first man Adam. The author of the Psalm makes a distinction between the two figures, but also regards them as real fathers of the people.  They are the deified rulers who are ancestral to Jesus Christ, the Divine "Son of Man."

Usher also didn’t understand that the genealogical material in Genesis 4 and 5 pertains to the wives of Cain and Seth, the daughter of an African chief named Enoch or Nok. Therefore the name that should appear at the head of the family tree is Nok, the father-in-law of Cain and Seth. Analysis of the Genesis 4 and 5 kinship pattern makes it clear that Adam is not the head of these lines.

In biblical parlance Adam represents the first created man.  Since the oldest human fossils are over 3 million years old, Adam would have been created at least before these humans.  Enoch, on the other hand lived no more than 12,000 years ago. He is the father-in-law of Cain and Seth.

Cain and Seth's brides named their first-born sons Enoch, after their father. This name is sometimes rendered Hanoch, as in the case of Reuben's first-born son. The name that should appear at the head of the Genesis 4 and 5 family tree is Enoch or Nok. 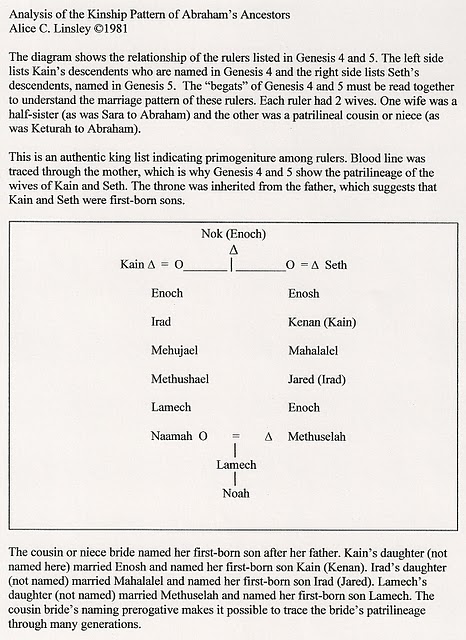 Bishop Usher appears to have been unaware that the descendents listed in Genesis 4 and 5 were ruler-priests whose lines exclusively intermarried. Each ruler-priest had 2 wives. One was a patrilineal cousin or niece who named her first-born son after her father. This explains the recurrence of names in chapters 4 and 5. For example, Kain and Kenan and Irad and Jared are linguistically equivalent names.

In the case of Lamech's daughter, Naamah, the pattern is quite clear. She married her cousin Methuselah and named her first-born son Lamech after her father.

Knowing the marriage pattern of the Horite ruler-priests helps us to trace Jesus Christ's ancestors from Genesis 4 and 5 to Joseph and Mary, of the ruler-priest lines, whose marriage appears to have been consistent with this pattern.

What is man (Enoch) that you are mindful of him,


It is not clear how you are inserting this Enoch reference. Patrick Reardon in his Christ in Psalms indicates a reference to Jesus.

Adam and Eve are etymological, not proper names. Both are traceable to western Afro-Asiatic roots. For example, "dam" in the Chadic and Kushitic languages means red and refers to the earth which the ancient Kushites believed was the source of blood.

I'm not inserting Enoch. This is a direct translation from the Hebrew text which poses Adam and Enoch as parallels.

I've no argument with Fr. Reardon's view. Everything in the Bible is ultimately about Jesus Christ, the Son of God, in fulfillment of the Bible's first promise (the Edenic Promise) in Gen. 3:15.

I believe you are in error about Psalm 8:6. The Hebrew does not say "What is henoch (heth-nun-vav-kaph)." It says, "What is enosh (aleph-nun-vav-shin)." "Enosh," of course, means "man, male." "Enoch" does not. (And for Hebrewless readers, note that the two names are much more dissimilarly spelled in Hebrew than in English. They're unlikely to be confused; nor would one serve very well as a pun for the other.)

Oh, hello. Learned about this blog through your interview in Road to Emmaus.

The point is that the names Enoch/Enosh/Hanoch stand for the first-born son in the ruling lines. He is the ruler-designate, and an historical figure. He is paralleled in Psalm 8 with Adam, the First Created Man, to whom the mandate was given to "Be fruitful, multiply, fill the earth and subdue it. Be masters of the fish of the sea, the birds of heaven and all the living creatures that move on earth." (Gen. 1:28)

"Enosh" is an altogether different matter. I would like to know the basis of your claim that it is "linguistically equivalent" to "Enoch." I don't think any semiticist would agree with you. "Enosh" is a straightforward use of the unambiguous root aleph-nun-shin, which means "man" in several semitic languages. "Enoch" is from the root heth-nun-kaph and probably means either "dedicated one, initiate" or "follower." That root shares only a single letter with "enosh," and while it's possible that the two gutterals aleph and heth could conceivably swap (although unlikely), it's far-fetched to claim that a shin and a kaph would ever do so. That's like saying an "s" became a "k" as a word moved from one European language to another.

In short, I think you need some very strong, hard evidence in order to claim that Enoch = Enosh, however similar they look once Anglicized.

Hebrew is a relatively recent language, do you agree? It is preceeded by Old Arabic and the roots of the Dedanites are Ham and Kush. So we much look to the Nile region for the meaning of the words that apply to these ruler-priests.

"Nakht" means powerful in Egyptian and applied to rulers, as in Pepi-nakht-Heqaib. In Hebrew it takes the form ha-nok, which means the chief. The name probably is connected to the Nok civilization in west central Africa which predates the Chaldeans by at least 4000 years.

True, Hebrew is relatively recent and localized compared with other semitic languages, but there is no mystery about its predecessors: Aramaic and Phoenician, which are ancient indeed. The root for the name "Enoch" (heth-nun-kaph) appears in Hebrew, Aramaic, Syriac, Arabic, and Ethiopic, so it's not as if there isn't any evidence available as to its basic meaning, which is something like "to use for the first time," a meaning which accounts for all of its forms and derivations in all of those languages. It's not certain if that circle expands all the way to Egypt, but if it does, shouldn't you give first consideration to Egyptian roots that retain the heth, like all the other languages do? Some people think Egyptian hnk.t "tribute, offering" is related, and some don't. To lop off the heth and pull out "nakht" as the ultimate source is going to require some hard evidence before any reputable linguist will buy it.

As you point out earlier, Enoch and Enosh are Anglicized. In fact, they made their way into modern versions of the English Bible from the Old English Bibles.

It is understood in comparative linguistics that the phonemes ch and sh are often interchangeable (as with the Old French use of ch for the English sh), and that they are sometimes reduced to the phoneme K (as the Old English C almost universally is spelled with a K in the German). As the names Enoch and Enosh are translations from Old English, it can be argued that Enoch (Kain's first-born son, listed in Gen. 4) and Enosh (Seth's first-born son, listed in Gen. 5) are equivalent and can be rendered Nok.

I really appreciate your excellent observations. We don't agree, obviously, on whether Enoch and Enosh are linguistically equivalent, but that's okay! I've really enjoyed the conversation.

Would you mind if I made this discussion available to other readers of Just Genesis?

No, I don't mind at all, and thank you for the kind words.

I would point out that the Hebrew kaph does not represent the phoneme ch. It's not a gutteral; it's a good, dry, hard k. It's the heth that = ch. (I wish I could put a dot under the "h", but I can use a "ch" instead, as the heth is pronounced much like the German ch.) Also, "ha-" meaning "the" uses the he, not the heth.

If I'm following you correctly, you're arguing that at the front of the original word ("nok"), a he was added ("ha-nok," i.e., "the nok"), so presumably we've already taken "nok" into Hebrew at that point, since we're putting a Hebrew "the" on it. The he then turned into a heth (for the name Enoch) and it also turned into an aleph (for Enosh). Meanwhile, at the back end of the word "nok", the Hebrew quite predictably used a kaph (first on "ha-nok", and then "cha-nok" or Enoch), but at some point this kaph turned into a shin, presumably at the same time that the letter in front (either a he or a heth) was turning into an aleph, and that's how we got enosh. But for your "k" to morph into a "sh" I would think you would need an intermediate step, like the "k" becoming a "ch" and then a "sh," unless you have something in comparative linguistics suggesting that a k can turn directly into a sh.

Any one of these phonemic shifts by itself is possible, and some of them are unremarkable, but taken as a whole, doesn't the bumpy pathway you've traced out whereby the names Enoch and Enosh may equal each other, and both of them may equal Egyptian Nok, require an awful lot of special pleading in the absence of hard evidence? Especially since "chanok" and "enosh" are easily derived just as they are from the pool of common semitic roots right there in the Hebrews' back yard?

Nok probably was not Egyptian, but his line intermarried with the Nubian line that conquered Egypt.

I'll post our discussion tomorrow or the next day. Thanks again for engaging me on this. You've given me more to think about and research.