Peaks and Valleys in Biblical Symbolism


Among Abraham's people, God was thought to reside at the summit of the universe. Later this was conceptualized as a seven-tiers cosmos with the throne of God resting at the seventh firmament of heaven. This is why Babylonian ziggurats had seven terraces. Saint Paul’s mystical experience of being taken to the third heaven should be understood in the context of the Afro-Asiatic cosmology which shaped his Jewish thought. Jacob's dream of a ladder going up to heaven is another image of God at the summit.

Many African tribes claim mountains as their sacred ladder to heaven. For the Gikuyu, Mount Kenya is the “Kere-Nyaga” which means Mountain of Brightness. For the Masai, the sacred mountain is the active volcano "Oldoinyo LeNgai" in Tanzania. "Ngai" is the name for the supreme God among the Gikuyu and the Masai.

The concept of God at the summit led to the construction of high places, temple mounts, pyramids and ziggurats. The Babylonian temple mounts were houses for the deity ("beth" in Hebrew). Bel's temple at Nippur was called “E-Kur” which means “mountain house”. One of the oldest temples found in Assyria bears the name “E-Kharsag-Kurkura” which means “house of the mountain of all lands”. This may be analogous to the Israelite conception of the temple on Mount Zion as “a house of prayer for all nations.” The temple platform in Jerusalem is about 2500 feet above sea level and the temple at ancient Hierakonpolis sat high above the city on the summit of the fortress. This city and temple were ancient even to the ancient Egyptians.

In the Bible we find God self-revealing on mountain tops: to Moses on Sinai, to Abraham on Mount Moriah, and to Peter, James and John on the Mount of Transfiguration.

Important biblical symbolism is also attached to being between the mountains. In contemporay Christian idiom we speak about spiritual peaks and valleys. However, there is a tendency to interpret these are positive and negative experiences - spiritual highs and lows - which is NOT consistent with the biblical view. Peaks and valleys are places where we encounter both blessing and judgement.

The valley is where the melting snow flows down from the mountains. It is were rivers cut trenches in the earth's surface. These rivers provided water in abundance, which is why Egypt was called a garden. The place between mountains is the place of inundation, for good and bad. It symbolizes divine blessing and divine judgement. 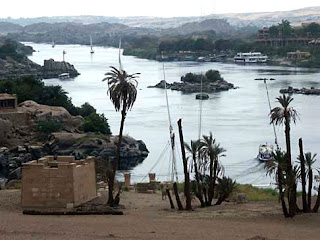 The annual flooding of the Nile was a blessing because it dispersed a fertile layer of silt for crops and it was a curse because those who dwelt along the river had to abandon their homes for forty days and forty nights.

The Nile flows north between two mountain chains, one on the east and the other on the west. In ancient Egyptian mythology there were two sacred mountains flanking the Nile. Bahku was the mythical mountain from which the sun rose on the eastern horizon. The other sacred mountain was Manu on the western horizon. In Abraham's time, Bakhu and Manu were the most frequent expressions for the extreme East and West. These peaks were guarded by the double lion, Aker, and between the peaks Re came at high noon like a lover between the breasts of his beloved.

Elephantine Island, the largest of the Aswan area islands, was the center of Nubia's international power. Pepinakht-Heqaib, who lived during the third millenium BC, rendered judgement from Elephantine and waged wars. Pepinakht-Heqaib claimed that when judging between two brothers, presumably first-born sons, he never deprived a rightful heir of his inheritance. Since he lived before the time of Joseph, we may speculate that he was honoring a long-standing custom among his people. This indicates that the practice of chiefs having two first born sons (by two wives) pre-dates the Asiatic Hyksos' domination of Egypt. Elephantine sat at the sacred center between mountains on the east and on the west.

The sacred center in ancient Canaan was Shechem (modern Nablus). It was located between the mountains of Ebal on the northern side of the valley and Mount Gerizim on the southern side. Mount Ebal rises 3084 feet above sea level, some 194 feet (59 meters) higher than Mount Gerizim. From Mount Gerizim the priests declared the blessings and from Mount Ebal the curses (Deut. 11:29). This was part of the covenant at Shechem, but curiously only the curses are recorded in Scripture (Deut. 27).

The situation of Ebal and Gerizim, with the sacred shrine in the valley below, is like that of the Bakhu and Manu bordering the Nile, with Elephantine at the center. . Likewise, the waters of Eden were said to flow from four rivers and the Jordan begins at the junction of four streams (the Bareighit, the Hasbany, the Leddan, and the Banias), in the upper part of the plain of Lake Huleh.

Bakhu-Manu represents east-west and Ebal-Gerizim represents north-south. The difference in the polarity suggests that the north would be the direction from which trouble would come upon Israel, a sad reality confirmed by history.

Sacred centers such as Elephantine and Shechem are indicated by their placement between two shrine cities, mountains or high places. The moreh who Abraham consulted at the oak of Mamre was midway between Bethel on the west and Ai on the east (Gen. 12:6-8). The prophetess Deborah judged from her palm tree at the sacred center between Bethel to the north and Ramah to the south. So we see that the masculine is associated with the east-west axis and the feminine with the north-south axis. If curses were from the north, then blessings were from the south, the direction from which Abraham's ancestors originated. They were the first to hear the Edenic Promise that the Woman's Seed would crush the head of the serpent and restore Paradise (Gen. 3:15). This is the faith from which all blessings spring.

Peaks and valleys also represented the masculine and feminine principles. Indeed, the words "valley" and "vagina" are related and share the ancient symbol V.