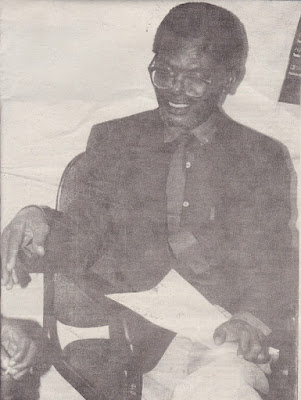 
Modupe Oduyoye is a Nigerian philologist whose book Sons of Gods and the Daughters of Men: An Afro-Asiatic Interpretation of Genesis 1-11 makes connections between the book of Genesis and African names, places, narratives and religious practices. The book was published in 1984 by Orbis Books, Maryknoll, New York.

In his book, Dr. Oduyoye notes the connection between Adamu Orisa (of Lagos State) and the Hebrew r’ison Adam. He notes that Hebrew Qayin (Kain/Cain) and the Arabic word for smith qayn are cognates. This relates to the biblical Kenites who were metalworkers and descendants of Cain. Oduyoye notes that these words are related to the Yoruba Ogun and Fon Gun, both referring to the “patron saint of smiths.”

Other cognates include Ebira Egene (the metalworker caste) and Hamn Kuno (who invented iron smelting). This may connect Kain to the city of Kano, which is north of the ancient complex at Nok, the place to which Kain likely "wandered" after he was sent away, and where he married a daughter of the ruler of Nok. Oduyoye notes that the Hebrew Nod נוד and Nok נוך are almost identical.

Oduyoye wanted the seminarians to dig into the text because they needed to understand its cultural context, a context suggested by the etymology. He explained, “Christian preaching certainly needs a stronger pillar to lean upon than a basis of obscurantism.”