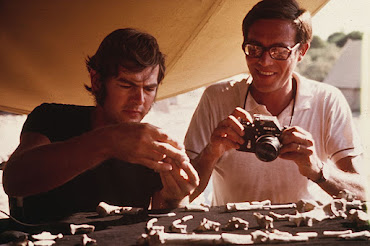 Donald Johanson and Maurice Taieb (with camera) in 1974, studying the bones of an Australopithecus afarensis specimen later named Lucy.

Alice C. Linsley
An anonymous comment here claims to be from Dr. Jeremy De Silva whose research has shown that Australopithecus lacked the large grasping toe typical of tree climbers, and its spine, pelvis, knees, and ankles were made for walking on two legs and not designed for tree climbing.

A recent discovery of a complete fourth metatarsal of A. afarensis at Hadar shows the deep, flat base and tarsal facets that "imply that its midfoot had no ape-like midtarsal break. These features show that the A. afarensis foot was functionally like that of modern humans." (Carol Ward, William H. Kimbel, Donald C. Johanson, Feb. 2011) Read the report here.

Additionally, A. afarensis apparently used polished bone tools, had communal meals, and controlled fire. Some of the earliest evidence of controlled use of fire by humans was found at Swartkrans in South Africa. Other sites that indicate fire use include Chesowanja near Lake Baringo, Koobi Fora and Olorgesailie in Kenya.

Mary Leakey’s 1979 discoveries in Tanzania added to the evidence that humans walked the earth about over 3 million years ago. At Laetoli, about 25 miles south of Olduvai Gorge in Tanzania, Leakey discovered footprints of a man, woman and child created about 3.6 million years ago and preserved under falling ash from the nearby Sadiman volcano. The raised arch and rounded heel of the footprints showed that whoever left these footprints walked as humans today.

Unfortunately, Donald C. Johanson had already pronounced to the world the term "Australopithecus" meaning ape of the south or southern ape. Mary Leakey might have objected. She expressed her regret that “the Laetoli fellow is now doomed to be called Australopithecus afarensis.”

Johanson and Mary Leakey were scheduled to speak at a Nobel Symposium in Sweden in May 1978. The conference honored Mary Leakey, who received a medal from the King of Sweden for her scientific investigations. Mary Leakey received the Golden Linnaean Medal, but also was very embarrassed when Johanson announced the new name - Australopithecus afarensis - for his Afar Triangle finds and included Mary Leakey's 4-million-year Laetoli specimen (jawbone LH4) from Tanzania as an exhibit.

Johanson, who was scheduled to speak before Mary Leakey, scooped Mary's speech. She was angry that Johanson had named her discoveries, using a designation that was totally at odds with what she believed to be the evidence. Johanson's name stuck though he clearly has doubts based on more recent discoveries as to the accuracy of the ape designation.

The designation of the finds in Ethiopia as apes is contradicted by the evidence that these fossils had oppositional thumbs, short fingers, human dentition, and apparently built fires. Discoveries in Dikika, near Gona and Bouri, Ethiopia indicate that they shared their food, and used flints to scrap, saw and chop. Two fossilized bones have been found that appear to be marked by stone tools. On the basis of low-power microscopic and environmental scanning electron microscope observations, these bones show unambiguous stone-tool cut marks for flesh removal and to access bone marrow.

The evidence taken together indicates that Lucy and her community were human, though anatomically archaic humans. What do you think?


Related reading: Maurice Taieb, the Geologist who Discovered the Site Where Lucy was Found; Genesis and Genetics; Biblical Anthropologists Discuss Darwin; The Evolution of Darwinian Evolution; Getting the Facts About Human Origins; Is Genesis Really About Human Origins?

Alice,
I know from reading "Just Genesis" that you have good reasons for affirming old-earth creationism. What's going on with Bill Nye bashing creationism? http://gma.yahoo.com/blogs/abc-blogs/bill-nye-science-guy-hits-evolution-deniers-123047918--abc-news-tech.html

Alice,
I also meant to ask about an article on the NPR site about an elephant 'playing' the harmonica. The author quotes someone as saying that music is simply "an evolutionary accident." That statement seems absurd to me; what do you think?
http://www.npr.org/2012/08/26/159998889/a-pachyderms-ditty-prompts-an-elephantine-debate

Nye bashes Young Earth Creationism and appears to be unaware that Old Earth Creationists hold to some aspects of Darwin, such as adaptation and mutation. These are evident. However, Darwin's theory of humans and apes sharing a common ancestors is not evident. In fact,it is not supported by the evidence.

The NPR statement about music being an accident is consistent with the evolutionary view of Materialists. For them evolution is a random mechanism. Again, the evidence doesn't support randomness as it is posted by Materialists. It supports the Biblical view of an underlying order to the universe.