Genesis on the Ancient Kingdom Builders


Genesis tells a story of a mighty race of archaic rulers who dispersed widely taking with them skilled craftsmen and priests. Obviously, since the rulers listed in Genesis 4 and 5 are Neolithic kings, Genesis begins the story of Abraham's Nilo-Saharan ancestors much later than the earliest humans. It does provide some anthropologically significant data, however, about early human communities, ancient castes, and the religious beliefs honored by the people.

Ancestor veneration was practiced universally and it appears that there was a widespread expectation of a righteous ruler who would establish universal rule of peace and justice. He was a man who carried a big stick. He was expected to produce children to enlarge the clan. He would have had more than one female partner. He was honored at his death by a proper burial, usually in hidden subterranean caves or in remote mountain caves.

The first historical ruler named in Genesis is Kain/Kayan (Kahn), which means king. His line intermarried with the line of his ruler Seth. This means that Cain's line was not cut off in the flood. Likewise, the lines of Ham and Shem intermarried. Abraham is a descendant of both.

Nahor the Elder was Abraham's grandfather. Abraham's mother and father had the same father but different mothers, as shown in the diagram below. Nahor was the royal title of Abraham's older brother. He ruled in the territory of his maternal grandfather and of his father Terah in the region of Aram Na-haraim, between the western Tigris and the Euphrates. This territory was established by Nimrod, one of Nahor's ancestors (Gen. 10:8-12) Na-Haraim means "dedicated to Horus."  This was Horite territory.

The Horite rulers of Edom are listed in Genesis 36. They are described as having a red skin tone. 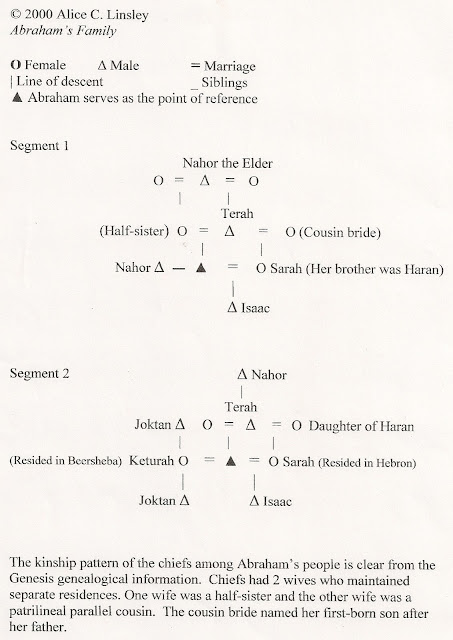 Nahor the Elder was a descendant of Nimrod, the great Kushite kingdom builder. Erech (Uruk), Accad and Calneh were shrine cities in Nimrod's territory. Accad is Agade, the original name of a river settlement in Odukpani, Nigeria. Accad is a variant of Agades, a city in Niger which is famous for metalwork.

From there Nimrod expanded his territory to include other important cities, including Asshur, Nineveh, Rehoboth-Ir, Calah, and Resen. All these cities had a common script - the Akkadian cuneiform.

In Nigerian lore Nimrod is known as Sharru-Kin which means “the righteous King.” Nimrod's Akkadian name was Šarru-kīnu, which is usually translated “the true king.” Nimrod’s territory was called Kish, which is Kush. A seventh century Assyrian text designated Azu-piranu on the Euphrates as a principal city. It was a Horite shrine as evidenced by the word piranu. The Hapiru (Hebrew) devotees of Horus called their temples O-piru, meaning House of the Sun. Azu is an Nilo-Saharan name for God - Asa. Variant spellings include Asha, Ashai and Am-ashai (Nehemiah 11:13). Azu-piranu means “House of God” and is equivalent to the Hebrew Beth-el.

The language of Nimrod's territory was related to Elamite, Dravidian, Chadic and Nilo-Saharan languages. Nimrod was a son of Kush (Gen. 10:8-12). Abraham's family demonstrates the movement of peoples out of Africa along ancient water ways.

Linguistics and DNA studies have shown that Abraham and his ancestors were Kushites whose cultural context was that of the Afro-Asiatic Dominion which extended from West Africa to India. The region in red shows the area of Kushite expansion. "Kushite" is a general term that includes many peoples and skin tones, including red, brown, reddish brown and black.


The Archaic Afro-Asiatic Dominion
(Image from Clyde A. Winters)

This marriage and ascendancy pattern of the Kushite rulers drove expansion out of Africa. Genesis indicates that Kushites moved out of Africa into Mesopotamia and Central Asia. They brought their religious practices and beliefs with them. Kushite rulers, such as Nimrod and his priests spread a common worldview to India, Nepal, Cambodia and beyond. This stone relief at Anghor Wat shows the Ra's solar boat with Horus flying as a falcon at the top of the mast. Anghor is ankh-Hor which means "Long live Horus!" 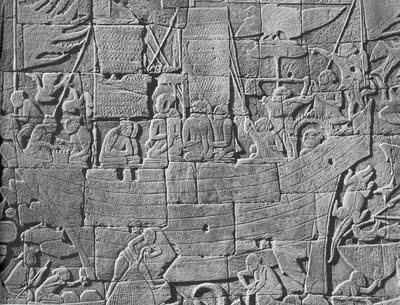 Nimrod was a younger son of Kush and was a "sent away" son. Sent-away sons are especially famous in the Bible for founding new territories or ascending to prominence in neighboring territories. Cain, Abraham, Ishmael, Jacob, Joseph and Moses are examples. Jesus Christ is God's sent-away son who establishes the eternal kingdom.

Just as Abraham gave gifts to all his sons and sent them away from his heir Isaac, so Kush gave gifts to his son Nimrod and sent him away from his older brother Ramah whose territory was in Arabia. As with all sent-away sons in the Bible, there was struggle and hardship, but ultimately by God's grace, these sons prospered. Nimrod’s territory was far greater than Ramah's.

Rulers such as Nimrod, Nahor and Terah were supported by the Ar clans, who were royal scribes. Among the Igbo, the scribe clans were called Ar or Aro. The Nsibidi script, said to be the oldest script of Africa, contains may Sumerian and Egyptian hieroglyphs. Likewise the Akkadian reflects the movement of royal scribes from the greater Chad basin along a west-east corridor.

The rulers were highly effective warriors who were served by metal workers who fashioned their weapons and symbols of authority such as iron beads and crooked staffs. These are called the Nes, Neshi or Nehesi. The metal-working Nes of Anatolia are their kin. The Neshi still function as priests in Igboland.

The Nes were a caste of smiths who venerated the cosmic serpent, the totem of their people. The ancient Egyptian Asa-ar means the Serpent of Asa (Deity). The peoples living in Arvad, Tyre and Sidon employed serpent imagery in their temples and shrines. The serpent was venerated among the Kushite ruler-priests of Israel. Aaron forged a bronze serpent on a rod which Moses raised over the people. All who looked upon it were saved from death.

Nehesi and the Biblical name Nahor share a common NH root. Na-Hor means the Na of Horus, that is to say "One who serves Horus." In Akkadian, Na is a modal prefix indicating service to, affirmation, or affiliation. Nahor was apparently a Horite ruler-priest, as was his father Terah. Terah means priest. It is evident that Terah and Nahor are titles.

Nehesi means "One who serves Hesi."  Hesi was another name for Hathor-Meri, Horus' mother. Throughout the ancient Afro-Asiatic world shrines were dedicated to both Horus and Hathor. These were mound cities with water sources. Tell-Hesi is an example. Other mound shrines included Hazor and Beersheba.

Nehesi also refers to people of the Upper Nile, and often appears as Ta-Nehesi, meaning Land of Nehesi. Ancient Kush was also called Ta-Nuhusi, a variant of Ta-Nehesi. Today this is designated as Nubia.

This evidence indicates a back and forth east-west movement of peoples along a well-watered equatorial zone. Given the antiquity of haplogroup L2a1 (c. 100,000) it appears that there was more mixing of peoples in the well-watered Saharan region than generally recognized. Haplogroup L2a1 also was found at Tell Halula in Syria (c. 9600).

It appears that the Akwa neshi dwarfs, the Khwe, and their southern Pygmy neighbors, share a common cradle land in the region of Nigeria-Cameroon where they enjoyed the benefits of the Benue and Niger Troughs that connected to the greater Chad Basin and to various lakes in and to the . The interconnection of these water systems made travel and commerce possible across vast distances.

Genetic comparisons of the Khwe and the sub-Saharan Kung San indicate different peoples living in close proximity. The Kung mtDNAs are mainly L1a2, a subset of the sub-Saharan Pygmy. Genetically, the Khwe (Kwa/Akwanshi) are more closely related to western African Bantu-speaking populations than to the Kung San. The Nigerian historian, Dr. Catherine Acholonu, describes the Khwe or Kwa Igbo as the "Diaspora Igbo," indicating movement along those water systems. She calls the Akwanshi the "Igbo First People."

Dr. Acholonu argues that Iboland is the cradle of the dispersed kingdom builders. That view is not supported by a limited study done at the University of Khartoum. The findings are in this report:

The area known today as Sudan may have been the scene of pivotal human evolutionary events, both as a corridor for ancient and modern migrations, as well as the venue of crucial past cultural evolution. Several questions pertaining to the pattern of succession of the different groups in early Sudan have been raised. To shed light on these aspects, ancient DNA (aDNA) and present DNA collection were made and studied using Y-chromosome markers for aDNA, and Y-chromosome and mtDNA markers for present DNA. Bone samples from different skeletal elements of burial sites from Neolithic, Meroitic, Post-Meroitic and Christian periods in Sudan were collected from Sudan National Museum. aDNA extraction was successful in 35 out of 76 samples, PCR was performed for sex determination using Amelogenin marker. Fourteen samples were females and19 were males. To generate Y-chromosome specific haplogroups A-M13, B-M60, F-M89 and Y Alu Polymorphism(YAP) markers, which define the deep ancestral haplotypes in the phylogenetic tree of Y-chromosome were used. Haplogroups A-M13 was found at high frequencies among Neolithic samples. Haplogroup F-M89 and YAP appeared to be more frequent among Meroitic, Post-Meroitic and Christian periods. Haplogroup B-M60 was not observed in the sample analyzed.

For extant DNA, Y-chromosome and mtDNA haplogroup variations were studied in 15 Sudanese populations representing the three linguistic families in Sudan by typing the major Y haplogroups in 445 unrelated males, and 404 unrelated individuals were sequenced for the mitochondrial hypervariable region.

Y-chromosome analysis shows Sudanese populations falling into haplogroups A, B, E, F, I, J, K, and R in frequencies of 16.9, 8.1, 34.2, 3.1, 1.3, 22.5, 0.9, and 13% respectively. Haplogroups A, B, and E occur mainly in Nilo-Saharan speaking groups including Nilotics, Fur, Borgu, and Masalit; whereas haplogroups F, I, J, K, and R are more frequent among Afro-Asiatic speaking groups including Arabs, Beja, Copts, and Hausa, and Niger-Congo speakers from the Fulani ethnic group.

Accordingly, though limited on number of aDNA samples, there is enough data to suggest and to tally with the historical evidence of the dominance by Nilotic elements during the early state formation in the Nile Valley, and as the states thrived there was a dominance by other elements particularly Nuba/Nubians."

Related reading: God's African Ancestors; The Origin of Castes; Afro-Asiatic Metal Workers; The Saharan Origins of the Pharaohs; Chronology of the Genesis Rulers