Hagar was one of Abraham's two concubines and Sarah's handmaid. Abraham's son by Hagar was Yishmael (Ishmael) an Egyptian chief, as is evident by the initial Vav, a solar symbol designating a ruler. The Y indicates that he was a clan chief, as were these men: Yaqtan, Yisbak, Yitzak, Yacob, Yisra-el and Yeshua.

Yishmael's ethnicity was traced through his Egyptian mother, just as Jewish ethnicity is traced through the mothers. The idea that the Arabs come from Abraham by Ishmael is simply wrong. The Ar clans existed before the time of Abraham, and Abraham's Arabian descendants are traced through his first born son Yaqtan (Joktan). This is Yaqtan the Younger. He is named for his maternal grandfather in whose territory he would serve as a sort of Prime Minister.

Hagar was a strong and sophisticated woman whose status actually increased once she left Sarah's service. She contracted marriage for her son with an Egyptian. This means that Yishmael's children were also Egyptian.

After leaving Sarah, Hagar had other offspring known as the Hagarites. They are mentioned in Psalm 83:6. It is evident from this psalm that the Hagarites and the Ishmaelites were regarded as distinct clans and Hagar, like Anah and Oholibamah, was a clan chief.

This information provides an answer to the question raised by the angel: And the angel of the Lord found her by a fountain of water in the wilderness, by the fountain in the way to Shur. And he said, "Hagar, Sarai's maid, from where came you? and where will you go?" (Gen. 16:7-8)

Upon leaving Sarah's service, Hagar was at a pivotal point in her life. She needed to review her past and consider her future. She appears to have made the most of all the opportunities God presented her.

The well at Sheba was very ancient. It was a water shrine under the control of Sheba, a Horite ancestor of both Abraham and Keturah. (Gen. 10:7) Sheba was the son of Ramah whose anceint priestly line was living in Ramah, the hometown of Elkanah and his two wives: Hannah and Penninah. Hannah was the mother of Samuel the Prophet. Penninah was the mother of Am-asi (I Chron. 2:25, 35). Am-asi is a Kushite name.

Beersheba and Kadesh were major water stations on the way to Egypt, so it appears that Hagar was returning to Egypt. The angel found her on "the way to Shur" (Darb el-Shur) which led from Beersheba to Kadesh-Barnea. From prehistoric times this route took travelers by year round water supplies. Flintstone tools dating between 80,000 and 16,000 BC have been found scattered around the area of Beerotayim (two wells). This is likely where the angel spoke to Hagar.

Archaeological surveys of the region have identified remains of structures on the eastern and western hills dating from the early and Middle Bronze Age. Hagar's route is indicated on the map as a dashed line. 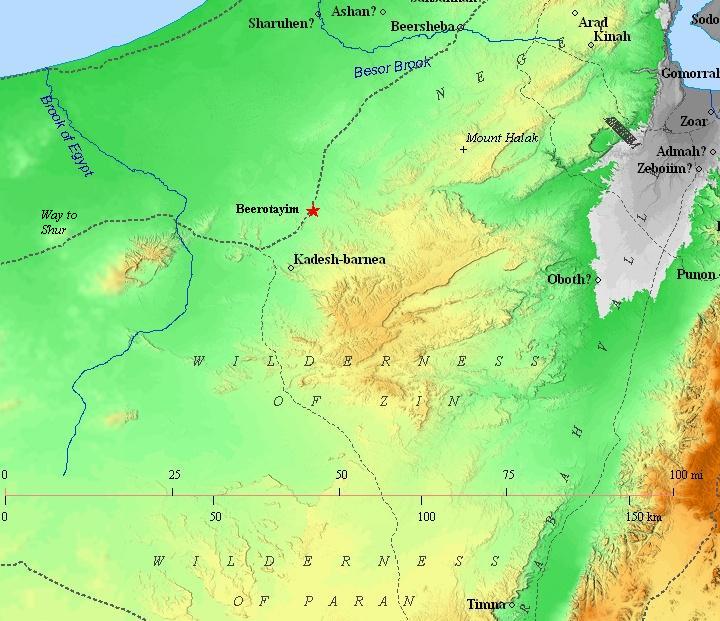 Hagar apparently heeded the angel's advice and returned to serve Sarah. There she remained until Abraham agreed to send her and his son away. She second journey away from Hebron took her in a different direction. She headed to the desert of Paran where she lived with Ishmael who became a master archer. As with all sent-away sons, Ishmael receives his own territory.

It is likely that Abraham made provision for Hagar and Ishmael to join his kinsmen in the area of Timna, shown on the map at the bottom.

Timna or Tema plays an important role in early Biblical history. Known by Arabs as Taima, this water source lies about 70 miles north-east of Dedan. During the Chalcolithic Period, Kushite artisans settled in Paran where they lived in subterranean dwellings carved out of the limestone with metal tools. The Bible refers to these cave-dwellers as Dedanites. Dedan, Tema and Buz comprized a Horite confederation.

The oldest Arabic texts have been found around the North Arabian oases of Tema and Dedan. An ivory workshop was discovered in one of these dwellings at Bir es-Safadi.

Joktan is a variant of the name Jonathan, meaning "God gives." Joktan lived about 1987-1912 B.C. That he was a ruler is evident by the solar symbol Y at the beginning of this name. In early Arabian scripts, such as Thamudic, symbols represented complex ideas and experiences including names, attributes and worldview. A solar symbol such as Y or T or O represented a deified or divinely appointed ruler, his territory, his people, and his resources such as water and gold. This is why the Horite ruler-priests names begin with the solar symbol: Yaqtan, Yishmael, Yitzak, Yisbak, Yacob, Yosef, Yeshua, etc.

Hi Alice
I stumbled upon your blog, I may have been goggling for info, but I wanted to tell you that I really enjoy reading it, I have learned a lot.
I appreciate this information, it seems to show that Hagar wasn't the victim I was always taught she was. Thanks for the enlightenment.

Thanks for your comment, Ramona. Women of the Bible are often portrayed as oppressed, downtrodden, or victims. This is an inaccurate portrayal, and one perpetuated by feminists who seek to discredit Biblical faith.

The truth is that 90% of the women named in the Bible were women of high social rank and influence as either the wives, daughter, or concubines of ruler-priests.

Hi Ms Linsley, thanks a lot for the work you have done and continue to do.
I have been thinking of Hagar and wondering if she was infact Semitic. Recently, I saw a BBC documentary on how there were power struggles between Egypt and some of her neighbors especially to the south, and during some periods of Egypt's history became pharoahs. It stands to reason that there would have been a lot of semitic integration into the hamitic Egyptian culture. So Hagar whose name is aparently semitic, would have still been classified as Egyptian. If this is the case, it would settle a lot of discrepancies for me.
1. How could Abraham who was so adamantly against his son marrying a non-semite would himself try to raise a seed with one.
2. If Sarah and Abraham seriously thought they could use Hagar to get the child they had been promised by God, I find it difficult to imagine that they would choose someone who wasn't a semite.
Please let me know your thoughts on this.

Those are wonderfully thoughtful questions, Adomaa!

There are several assumption here that we need to clarify.

1. The lines of Ham and Shem intermarried. Abraham is a descendant of both Ham and Shem. See this: http://jandyongenesis.blogspot.com/2012/01/abraham-descendant-of-both-shem-and-ham.html

Further, the God of Ham and Shem is the same God and their religion was the same - Horite.

2. Abraham's choice for Isaac was consistent with the Horite marriage and ascendancy pattern. See this:
http://jandyongenesis.blogspot.com/2008/06/biblical-kinship-symmetrical-pattern.html

This was Isaac's cousin bride. The cousin bride was taken just before the heir ascended to the throne. Isaac had a half-sister wife in Beersheba.

3. Sarah wasn't thinking straight. She was desperate. Hagar's son would never have been Abraham's heir. The proper heir was the first born son of the half-sister wife - in this case Sarah. Since Sarah was barren, the firstborn of Abraham's concubine Mazek was the next in line as heir. This was Eliezar. See this: http://jandyongenesis.blogspot.com/2011/12/why-eliezar-was-abrahams-heir.html

Alice, this is fascinating. Much food for thought.

I found your blog post while looking into the Psalm 83 prophecy. I was curious as to what land you would designate as the Hagrites mentioned in Psalm 83:6. I have seen some label her as Egypt and others J( http://www.wnd.com/2012/08/which-nations-does-psalm-83-really-include/ ). Just curious.

Chad, the article is written by an end times enthusiast who does not employ sound principles of biblical interpretation. This is totally lacking in good scholarship.

Remember that Hebrew and Proto-Hebrew have no vowels. The root of this word is hgr and can appear in many forms. Hagarite has variant spellings, including: Hagarenes, Hagrites, Hagri, Haggeri, and the word is also a common girl's name - Hagrita - among the descendants of Noah who populated ancient Hungary. The Hungarians call themselves the Magyar and the Magyar-ab (tribe of Magyar) originated along the Nile Valley.

Some things to note about Psalm 38: Ten groups are named. They are not nations, but regions that were known to oppose Israel's expansion under the Solomonic monarchy. The House of David had close connections to many of these peoples, so Psalm 38 is one of the later psalms.

David was related to the rulers of Edom, and Gebal was part of Edom. Abraham's territory was entirely in the land of Edom. See this:

David was also descended from a Moabite, Ruth. He received materials and technical assistance from King Hiram of Tyre in building his palace. A man named Haggeri is listed among David's great men in 1 Chronicles 11:38.

It is curious that Ishmaelites and Hagarites would be grouped separately if Hagarite is a reference to Ishmael's mother. Among Abraham's people, blood line was traced through the mothers, not the fathers. However, regional identity was linked to the ruler, who often was an outsider, a conqueror.

Another theory, and one which deserves more research, is this: the word "ha" means "the" and "gr" is an ancient reference to traders who moved from the Nile Valley and the Sahara into Pakistan, India, Anatolia and as far as Cambodia, Indonesia, and the Philippines. They are called Gur, Gar, Gurguri, Gurgar, and Gurjars in history books. See this:
http://jandyongenesis.blogspot.com/2014/03/from-nile-to-philippines-tracing-gurjars.html

I'm glad you are pursuing this interesting question, Chad!

Chad, you will find a fuller explanation here:
http://jandyongenesis.blogspot.com/2015/02/abusing-biblical-lists.html

My research suggests that the well Hagar rested at with her son Ishmael, called Beer'lahai'roi, is today preserved in two ancient ruins which lie near each other, khirbets Lekiyeh and Ras (see the Conder map of Palestine, 1868), to the north of Beersheba. The Darb el Shur passes just south of these two sites, and continues to Beersheba. Most biblical maps show Beer'lahai'roi to be southwest of Beersheba, near Bir el Muweilah. Google "Mattfeld Beerlahairoi, Lekiyah" for more info.

As regards Abraham at Beersheba: Israeli archaeologists have excavated ancient Beersheba's well, and found in its depths shattered pottery shards of Philistine manufacture, suggesting that the Bible's mention of Philistines contesting the ownership of this well with Abraham has a verifyable historical basis. The problem? Abraham is dated circa 2000 BC but the Philistine shards are dated circa 1150 BC. Some archaeologists have concluded that Abraham was dated too early in the Bible, if his well is circa 1150 BC with its Philistine shards. For further info see articles on Beersheba and its well in post 1970 archaeological journals or dictionaries on the internet.

Thank you, Walter, for that information.

I wonder if Hagar might have been the handmaid of Keturah, rather than of Sarah. Sarah resided in Hebron. Beer Lahairoi is a good distance from Hebron, but it is the likely direction an Egyptian might go were she trying to return home, and it is closer to Beersheba where Keturah resided.

Do you think that in chapter 16 and 21 that Hagar was at the same well? The first time she left of her own will, the second time in 21 she is sent away, in her destress and short of water, I imagine tears, that she just didn’t see the well, not realizing the the very thing that could save her was just in sight, one the angel gives comfort, her eyes are open to see the well.