Genesis Has No Evolutionary Framework 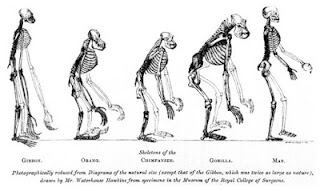 Many evolutionary creationists attempt to read Genesis through a Darwinian template and in doing so they distort the meaning. The ancients through whom God delivered this material did not think that humans and apes descend from a common ancestor. They believe that God created humans fully human from the beginning in a divine act at a moment in the distant past. There is no reason to reject this view since humans appear suddenly on the earth about 4 million years ago, and though these were anatomically archaic, they were nonetheless, fully human. We have evidence of hunting and butchering, control of fire, human dentition, erect walk, and opposing thumbs.

The discovery of a complete fourth metatarsal of A. afarensis at Hadar shows the deep, flat base and tarsal facets that "imply that its midfoot had no ape-like midtarsal break. These features show that the A. afarensis foot was functionally like that of modern humans." (Carol Ward, William H. Kimbel, Donald C. Johanson, Feb. 2011)

In 2011 researchers discovered jaw bones and teeth of four individuals in the Afar region of Ethiopia which date to between 3.3m and 3.5m years old. These archaic humans were alive at the same time as other groups of early humans, suggesting that it may be time to abandon the linear evolution hypothesis. Clearly, there were more archaic humans living in Africa 3 million years ago than has been generally recognized.

The writers of Genesis should be given credit for a worldview that is philosophically sound and supported by physical evidence. Their worldview cannot be made to align with all aspects of evolutionary science.

The worldview of Abraham's ancestors is grounded in their closeness to the natural world and their acute observation of patterns. They noted that humans reproduce only humans. They observed that the fig tree produces only figs and though the figs varied in shape, size and flavor, their "figness" remained. This is an essentialist worldview and it is described by the term "kinds" in Genesis.

The word min [מִין] according to Strong's H4327, refers to kind or species, yet "kind" and "species" do not have the same meaning. In Genesis "kind" pertains to fixed essence, not to a biological category. The Biblical "kind" refers to the original pattern of a created entity. It pertains more to essence than to form.


The term "kind" in Genesis 1 refers to biological organisms that reproduce themselves. God created this mechanism so that fruit bearing trees reproduce trees that bear fruit of the same kind. Ferns and other rhizome plants bring forth plants of their kind through the spread of subterranean root systems. Apes bring forth apes, not humans. While there may be modification of condition or form, the essence of an entity remains unchanged. This is called "Essentialism" in philosophy, and this is what is meant by the Biblical term "kind."

Essentialism is a very ancient metaphysical concept. It is the basis of Plato's Forms, an idea he borrowed from the ancient Egyptians. Plato studied for 13 years with an Egyptian priest and borrowed many ideas from the Egyptians. Many of these ideas are evident among Abraham's Nilo-Saharan ancestors. They are the people from whom we receive the creation stories in Genesis 1, 2 and 3, although Genesis 2-3 is the older story.

As poorly defined as the term "species" is in biology, biologists recognize that a "species" boundary is that point beyond which there is no reproductive generation. This is called horotely, a term that describes the rate at which an organism can change over time. It indicates a genetic boundary beyond which the organism cannot change even if the mutation rate is high. The word relates to Horus, the Fixer of Boundaries, also known as the son of the Creator. This Greek word relates to the words Horus, oros (boundary/landmark/term), horizon and hour.

The ancients believed that cosmic boundaries were fixed by Horus. Even today Christians believe that all things were made through Christ and that all things are sustained in Christ. In this sense Christ is the fixer of boundaries and the ground upon which all biological life is unified. This is why Christians are justified in questioning the common ancestry hypothesis.

It is true that essentialism is not as evident among organisms that lack binary features such as symmetry, bilateralism, or bicamaralism. These organisms are found in the Precambrian and Cambrian layers, long before the appearance of humans. The binary feature appears to signal greater complexity. The earliest fossils are neither vegetation nor animal. They are without symmetry and binary features. In the Precambrian organisms we find neither bilateralism nor any bivalves. Once binary features emerge we begin to see greater diversity and complexity (the so-called Cambrian "explosion" which lasted 90 million years).


It is interesting to note that the term min [מִין] is never used in the Bible in reference to humans. Humans are unique. They are made after another kind, in the image and likeness of the Creator. This is true of both archaic and modern humans.

When we speak of archaic humans and modern humans, the distinction is one of anatomical difference explained by local adaptation. The essence remains unchanged. The evidence concerning archaic humans does not support the hypothesis of common ancestry proposed by Darwinians. The oldest humans fossils date to about 4 million years and all the evidence indicates that these were essentially human, despite the small brain size. Brain size is not a measure of sophistication of thought.

A. afarensis used polished bone tools to cut, chop and scrap, shared food, and used fire. Some of the earliest evidence of controlled fire by humans was found at Swartkrans in South Africa. Other sites that indicate fire use include Chesowanja near Lake Baringo, Koobi Fora and Olorgesailie in Kenya.

A. afarensis also had human dentition. In humans, the back teeth are larger than the front teeth (not so with apes), and the canines are not pointed. Humans also lack the characteristic diastema or tooth gap found in apes.

The so-called "Apes of the South" were fully human, though anatomically archaic, and they appeared suddenly and unheralded on the surface of the Earth about 4 million years ago. Humans appear to be a de novo creation. From the beginning humans have had a binary thought pattern, a binary structure, and a fixed essence.

Strong's and other similar study tools do not reflect the latest research. Many of the oldest Hebrew roots are found in African cognates. For example, ha-risoniym (righteous ancestors) in Psalm 79.8 is related to the Arabic rais (leader), the Hebrew raz (leader), the Aramiac resh, the Akkadian rishu, and the Yoruba orisha (deified ancestors).

Min among the ancient Nilotic peoples was a symbol of the life giving seed that comes from the Creator and gives life to growing things on earth. The Creator's symbol was the sun which was perceived to inseminate the earth. However, the term min is never used in the Bible in reference to humans. Humans are unique. They are made, not as plants from seeds, but molded in the image and likeness of the Creator. This is why onanism was considered such a great offense against the Creator. The seed that should fall to the earth is the seed of plants, which spring forth from the earth. The seed of man should fall on his own type (the womb), from which man comes forth. Clement of Alexandria wrote, “Because of its divine institution for the propagation of man, the seed is not to be vainly ejaculated, nor is it to be damaged, nor is it to be wasted” (The Instructor of Children 2:10:91:2 A.D. 191).

Related reading: Theories About the Cambrian Explosion; Biblical Anthropologists Discuss Darwin; The Binary Aspect of the Biblical Worldview; Questioning the Common Ancestry Hypothesis; A Theological and Scientific Conversation About Genesis;  Pre-Darwinian Taxonomy and Essentialism by David Stamos; Theories of Change and Constancy

Ninurta was the name of the deity or patron of law, scribes, farming, and hunting. The name is Nin-Ur-Ta. Ur refers to shrine cities or fortified "high places" in Mesopotamia. The cult of Ninurta can be traced back to the oldest period of Sumerian history. A related word is "Urartu" which refers to the heights, probably rock shelters that became settlements. Many cities are designated Ur. Variants of the word Ur include Ar. Ar is likely derived from Kar and Har, both referring to a mountain.