The Lion and Ancient Rulers

The twin lions face east and west on the banks of the Nile. The Sun rests at high noon over the life-giving waters. This is the time of no shadows when the earth is divinely overshadowed (James 1:17). Reflecting on the fact that the Sun was the emblem of the Creator and his son Horus, this is a Proto-Eucharistic image. 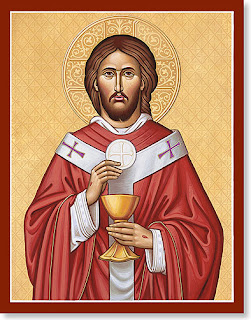 Rulers in the ancient world were identified with the lion. The lion was the animal totem of the ruling caste that are identified in Genesis as the "mighty men of old." Thus many rulers named in the Bible have the AR affix, signifying both the lion and the ruler. Ari was used in Hebrew as an honorific for a man if distinction and power.

The Hebrew Ari or Aryeh is cognate with Akkadian aria, Aramaic arya, and the Sanskrit aryeh means "noble."

Arpacshad is one of the rulers named in Genesis with the AR affix. He was the son by Asshur's daughter. His name means "happy ruler" or "happy lion." He ruled during the time of the 7th- 10th Egyptian Dynasties (2445–2160 BC).

Two royal scribe castes are listed in Genesis 10: the Arvadites and the Arkaites. The Igbo of Nigeria call their scribes the Ar or Aro. The late Dr. Catherine Acholonu explained, "In Nigeria the caste under reference is the Ar/Aro caste of Igbo Eri priest-kings, who were highly militarized in their philosophy."

The association of the name Ar with the royal scribal caste is further demonstrated by the discovery of Aramaic scrolls written by the satrap Arsames to his Egyptian administrator Psamshek and to an Egyptian ruler named Nekht-hor.

Another Bible name with the honorific title is Arba, the son of Anak. Hebron was called Kiriath-Arba.

The totem of Shobal's clan was the lion fierce in it youthful strength. Shobal was one of the Horite Habiru kings named in the Genesis 36 ruler list.

Related reading: Chronology of the Genesis Rulers; The Lion and Judah; Righteous Rulers and the Resurrection

Is there any connection between Asshur the guy and Ashur the god?

Or are they just accidental homonyms.

Asa was an archaic name for the Creator. The names Asshur and Ashur may be Asa with the Horus name, typical of kings of Nilotic ancestry.

Asa was an Egyptian name for the Creator. It is related to the Yoruba word Ausa, meaning Father. Many Nilotic peoples referred to the Creator as the Father.

Some Nilotic peoples today still worship As or Asa as is the case with the Kushitic Kalenjin of the Rift Valley. Traditional Kalenjin call the Creator Asis. Most Kalenjin are Christian.

Akkadian records attest to the antiquity of the name Azu for God. Sargon was born at the shrine city of Azu-piranu, which means Sun House of Azu. The Creator was called Azu in Akkadian, Asa in Chadic, Asha in Kushitic, and Ashai in Hebrew. A Jerusalem priest named Am-ashai is named in Nehemiah 11:13.

"Many Nilotic peoples referred to the Creator as the Father."


Would you say this is unique with Nilotic people? Muslims would never dream of calling Allah Father.

Islam is not rooted in the Messianic faith of Abraham's Nilotic ancestors.

The Dinka of Sudan have this proverb:

On us shall descend some awful curse,
Like the curse that descended in far-off times.
Thus speaks the Creator of men,
But the men refuse to listen...
Men of such kind will gain nothing from the Father,
For they know not his voice.
He is the one who loves man.

I'm trying to think of another world religion (or even minor) that calls God Father.

I think of Islam as a Christian heresy.