Abraham is a pivotal figure of biblical history. He was Horite Hebrew. The Horite Hebrew are mentioned in ancient Akkadian texts as a ruler-priest caste called "Abrutu". The term "Abrutu" comes from the Akkadian word for priest - abru. The Horite Hebrew chiefs of Edom are listed in Genesis 36. Edom was Abraham's territory. Abraham was Horite Hebrew, and his faith is closer to Christianity than to Judaism because he believed in God Father and God Son.
We also know a good deal about the Horite priests from documents outside the Bible. In the Ancient Pyramid Texts the Horite priests and the Sethite priests represent a moiety, that is one people divided into two ritual groups. They maintained separate shrines (mounds) but the served the smae high king and worshippped the same God.
Abraham's elder brother Nahor took control of their father's territory in Mesopotamia and Abraham was sent away to establish a territory of his own. His territory extended between Kiriath-Arba (Hebron) and Beersheba. His territory was entirely in the region of ancient Edom (Idumea), the land of red people.
Abraham was kin to the Horite rulers of Edom who are listed in Genesis 36. 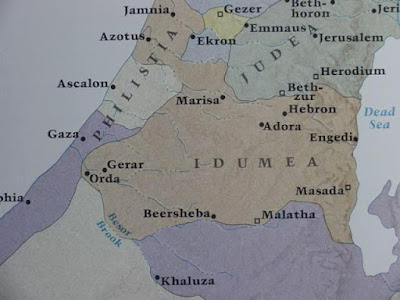 Note that both Hebron (where Sarah lived) and Beersheba (where Keturah lived) are in Edom. Abraham's territory extended on a north-south axis between the settlements of his two wives.
Abraham's ancestors were Proto-Saharan and Nilotic rulers, some of whom are listed in the Genesis 4 and 5 king lists. These rulers dispersed widely in the service of the early kingdom builder like Nimrod, the son of Kush (Genesis 10). His ancestors were known by various names: Abru, Abrutu, Ha'biru; Hapiru, 'apiru, Horim, and Horite.
Abraham's line descends from Nimrod, the son of Kush (Gen. 10; diagram below). This means that Abraham was ethnically Kushite. The Kushites migrated out of the Nile Valley. 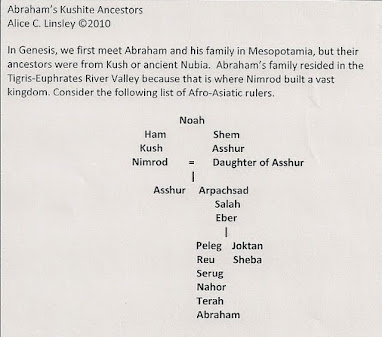 Many of Abraham's ancestors held titles of nobility  auch as Enoch, Lamech and Tera-neter (priest of God). Abraham’s father has the title Tera, which means priest. This image shows a Sethite priest of the Anu people.

Perhaps of interest re. horite/ainu priest:

The Cherokee refer to themselves as Tsalagi (ᏣᎳᎩ) or Aniyunwiya (ᎠᏂᏴᏫᏯᎢ), which means "Principal People."

"The Payne papers describe the account by Cherokee elders of a traditional two-part societal structure. A "white" organization of elders represented the seven clans. As Payne recounted, this group, which was hereditary and priestly, was responsible for religious activities, such as healing, purification, and prayer. A second group of younger men, the "red" organization, was responsible for warfare. The Cherokee considered warfare a polluting activity, and warriors required the purification by the priestly class before participants could reintegrate into normal village life. This hierarchy had disappeared long before the 18th century.

Researchers have debated the reasons for the change. Some historians believe the decline in priestly power originated with a revolt by the Cherokee against the abuses of the priestly class known as the Ani-kutani."

"materials written in the 19th century by the didanvwisgi (ᏗᏓᏅᏫᏍᎩ), Cherokee medicine men, after Sequoyah's creation of the Cherokee syllabary in the 1820s" wikipedia-cherokee

Maybe you can clear something up for me...Genesis 10:21 lists Arpachshad as the brother of Asshur, both being listed as sons of Shem, along with Elam,Lud, & Aram. So that gives me the impression that Asshur, Elam, Lud, & Aram represent 5 distinct patralineal groups of Shemites/Semitic people. To my understanding, the Biblical passage does not appear to support Abraham being a descendent of Nimrod. In the ancestry chart you posted, it looks like you had Arpachshad listed as a grandson of Asshur Son of Shem. Can you explain this? I may have misread the chart or missed a detail in your narrative. Thanks

These rulers had two wives. One was a patrilineal cousin who named her first born son after her father. The cousin bride's naming prerogative is the explanation and you may see that in these diagrams:

Amorite/Amur(black river) is fed by D/Z/Sungari/Songhua(white) River and flows to Okh-otz/Hokk-aido, this is the route the Ainu took from Dzungaria basin, north of Tarim basin. Basques/Ueskadi went west to Spain, utari went to sunrise.

from above note on Cherokee:

..."priestly class known as the Ani-kutani."

Hun-gar is especially provocative. The Hungarians call themselves the "Magyar" which is Ma-gyar = Hun-gar. The Magyar-ab - Tribe of Magyar - still live along the Nile River. Their ancestors moved east and north, perhaps as part of the Kushite expansion out of Africa. Gar means one who trades or a merchant in many Nilo-Saharan languages.

I'm curious about the name changes that took place in Genesis 17. How significant were these changes and why were they made by God? ('Abram' (High father) to 'Abraham' (burnt father) and 'Sarai' to 'Sarah').

Among the Luo does the word Ham appears as Kham or Lham. I have been told that ham can mean either blessing or cursing. Lam /Lham is to pray for a good or bad (curse) thing to happen. Lamo is the prayer or curse. However, the Acholi omit the L, hence Ham.﻿ The Acholi who venerate the cattle and saw the long-horn Acholi cattle horns as a symbol of the overshadowing of the Creator - the Y solar cradle.

There is no evidence in the Bible that Abraham "wandered" extensively or even cyclically, as nomads do. He came from Mesopotamia, as a sent-away son, to claim a territory for himself in what became known as Edom. His territory extended between Hebron and Beersheba.

DNA haplotypes, CMH J1m267 and J1C3, have identified Yemen as the original homeland of the Hebrews. 76% of Yemenese bear the J1m267 hapolotype and 67% bear the J1C3 haplotype. It is evident the Hebrew origins began with the incense caravaneers from the southern coast of the Arabian Peninsula. Also of interest is haplogroup J1C3d, which accounts for the majority of the J1 in Yemen, Cohen Jews (Jewish priestsly lineage), Ethiopia, the Quraysh (the tribe of the Prophet Mohammed), and Sayyid. Sayyid is an honorific title, that denotes males accepted as descendants of the Islamic prophet, Mohammed, through his grandsons, Hasan ibn Ali and Hussain ibn Ali, sons of the prophet’s daughter Fatima Zahara and his son-in-law Ali ibn Abi Talib. Currently the J1c3d haplotype has also been labeled as J-L147.1, but the links to Yemen, Sephardi Cohen Jews, Ethiopia, the Quraysh and the descendants of Mohammed remain in tact. According to genetic researchers Sergio Tofanelli and A. Nebel, this haplotype most likely arose at least 4500 years ago and maybe as early as 8600 ago. For references on the age and origin of this haplotype, please refer to the following publications:

So, you see Alice. Abraham was not from ancient Mesopotamia as the genetic links and the etymology of his name places him and/or his ancestors as originating from the southern coast of the Arabian Peninsula. Many Western Biblical scholars insist that Abraham was a pastoralist. However, the extensive list of Hebrew trading partners indicates that their caravan routes extended into Mesopotamia, Anatolia, all of the Levant (including the Mitanni Kingdom), Egypt, Libya and Abyssinia. Abraham is especially mentioned in connection with Egypt and Paran, the home of the Midianites. It can be safely assumed that Abraham traveled extensively.

The peoples of Yemen were Dedanites, famous for spice trading and caravans. Dedan is a descendant of Kush. Their priests were Horite (Horim, Houris) - the distinguished ones, or the righteous rulers. There are Horites among both Jews and Yememi.