In map A (below) we see a densely populated area around Nekhen, the oldest known shrine city of the Horites. The Horites were a caste of ruler-priests who were devotees of Horus, the Seed of the Creator, and his mother Hathor-Meri. Hathor is shown in ancient Nilo-Saharan images with the Y solar cradle on her head, indicating that she was divinely overshadowed.

Excavations at Nekhen (Hierakonpolis) have yielded numerous important artifacts, including evidence of sun veneration, circumcision, a caste of priests and animal sacrifice. The oldest known zoological collection was found during excavations at Nekhen in 2009. The royal menagerie dates to ca. 3500 BC and included hippos, elephants, baboons and wildcats.


After about 7000 BC these people were more widely dispersed throughout the Sahara and near Lake Chad. The epicenter of Noah's flood was likely in the region of Lake Chad. The ruler Noah likely kept a menagerie which he would have protected in the time of flood.

The dispersal of these peoples from the Nile region to Mali, Niger and Southern Algeria is indicated by the wavy-line and dotted pottery (shown right) found at sties across this expanse. 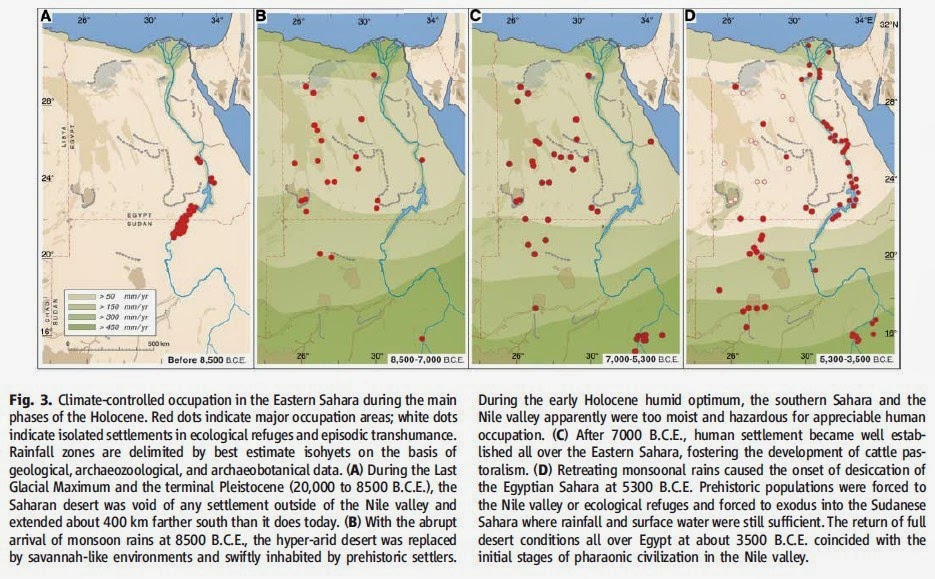 The Holocene Wet Period has be called the "Gurian Wet Period" and the "Aqualithic." The latter term was coined by British archaeologist John Sutton (Journal of Africa History 1974; Antiquity 1977). The Holocene Wet Period owes the abundance of water to climate cycles related to Earth's Great Year, to monsoons off the Indian Ocean, and to the African rifts that created great watersheds or troughs.
Between 12 and 10 thousand years ago, the Nile connected to the Chadic and Niger water systems through a series of shallow lakes in the Sahara Desert. This explains the common plant and animal species found in all three water systems.

"Examination of African barbed bone points recovered from Holocene sites provides a context to interpret three Late Pleistocene occurrences from Katanda and Ishango, Zaire, and White Paintings Shelter, Botswana. In sites dated to ca. 10,000 BP and younger, such artifacts are found widely distributed across the Sahara Desert, the Sahel, the Nile, and the East African Lakes. They are present in both ceramic and aceramic contexts, sometimes associated with domesticates. The almost-universal presence of fish remains indicates a subsistence adaptation which incorporates a riverine/lacustrine component. Typologically these points exhibit sufficient similarity in form and method of manufacture to be subsumed within a single African 'tradition.' They are absent at Fayum, where a distinct Natufian form occurs. Specimens dating to ca. 20,000 BP at Ishango, possibly a similar age at White Paintings Shelter, and up to 90,000 BP at Katanda clearly fall within this same African tradition and thus indicate a very long-term continuity which crosses traditionally conceived sub-Saharan cultural boundaries."(John E. Yellen. 1998. Barbed Bone Points: Tradition and Continuity in Saharan and Sub-Saharan Africa. African Archaeological Review, vol. 15, no. 3, pp. 173-198)

Near Fayum, closer to the Nile Delta, there is evidence of cultural affinity to the Natufians of Palestine.


Related reading: Genesis in Anthropological Perspective; Egypt in its African Context; Africa is Archaeologically Rich; Boats and Cows of the Nilo-Saharans; The Urheimat of the Canaanite Y; The Nubian context of YHWH; Ancient African Writing Systems of Middle Africa; Water Systems Connected Nile and Central Africa

Alice (may I call you Alice?)

---- devotees of Horus, the Seed of the Creator, and his mother Hathor-Meri.----

Just curious. What is your attitude toward people who worshiped Horus? Are they idolaters? Or were they worshiping the True God?

We still don't know enough about the Horites. To be a "devotee" is to serve. Did they worship Horus? Possibly Horus was worshiped as the incarnation of the Creator, his father, the Ruler of the universe. That is why the ancient Nilotic rulers were given Horus names. Their beliefs appear to be a primitive form of Messianic expectation; a sort of proto-Gospel. They expected a woman of their ruler-priests lines to be overshadowed and to conceive one who would overcome death and lead his people to immortality. Thus the great care taken in the ceremonial burial of their rulers. You might find this interesting:
http://biblicalanthropology.blogspot.com/2012/02/righteous-rulers-and-resurrection.html