There is no way to do justice to the topic of early scripts in a short blog post so it may be necessary to provide a series on this subject. When it comes to the development of written language systems we are faced with great complexity. This is a cursory discussion which I hope will be helpful and lead to further conversation.

What follows is an electronic communication with George, a faithful reader of JUST GENESIS. George and I have had several meaningful conversations via email. I thought that this one might be of interest to other readers and George has given me permission to reproduce the conversation. I have included some background information also.


George: I want to thank you for your blogs. I read them all the time and they have been a BIG help!


I've been trying to sell others on the fact that the Hebrew lettering system goes back further than the 4th century millennium BC thanks to your findings of the Ainu/Annu culture and their lettering system in their later homeland of Japan - but with no success.

I definitely believe your findings to be true. What I'm puzzled about is the fact that no archaeological evidence of the Hebrew lettering system has been found in Canaan or anywhere near Canaan between the 4th millennium BC and the Late Bronze Age. I just don't get it.

Just to verify, the Pyramid and Coffin texts (and the Papyrus of Ani) were all written in Egyptian. Is that correct? Was it originally written in Ainu lettering and then translated? If so, maybe this is the only evidence we may ever find of the pre-Hebrew lettering system historically.

Please let me know your thoughts.

PS - Would your Micmac contact in Canada know anything about this?


George has been following the fascinating research that links the Ainu of Japan to the Ainu (Micmac) of Eastern Canada and the Nilotic Ainu. This connection is explored in A Kindling of Ancient Memory. The information comes from the grandson of a Micmac elder named Sea’Key (the ’ is a little click made with the tongue.) His name means "White Salmon with a Heart of Gold."  He has been very generous with his time, sharing accounts of his people's history. Sea'Key was the first to notice the close resemblance of the Ainu and Hebrew scripts (shown below). 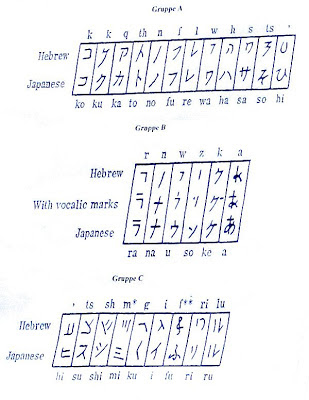 Alice:  Proto-Sinaitic (Proto-Canaanite) scripts are related to Egyptian signs, many of which are dependent upon earlier signs used by the Upper Nilotes and Proto-Saharans. The ancient Egyptian signs (hieroglyphs) provide valuable clues to understanding many of the non-Hebrew words that appear in the Old Testament that have a Nilo-Saharan origin. Egyptian hieroglyphs were widely used among the early Semites because Egypt had become very powerful and exercised great influence in Canaan as evidenced by the Egyptian shrines on the ancient Horus road.

Another writing system that is important for understanding non-Hebrew words in the Old Testament is Sumerian. Some Sumerian words like: sahar (sand, dust, black); eden (steppe land, watered plain), and harran;(route, roadway) appear in the oldest material in the Old Testament. Sahar שחר is the Hebrew word for black.

All of the scripts I have mentioned are in the same Afro-Asiatic language family, except the Ainu, the origin of which is still disputed. The evidence suggests that it may be related to proto-languages of Turkey and Hungary. The Hungarians called themselves "Magyar" and claim to be descendants of Noah, a Nilo-Saharan ruler. It is also known that the archaic Nilotic rulers moved into Turkey because they built the shrine city Meroe on Mount Silpius overlooking the Orontes River. The fortress on the spur of Mount Silpius was named IO, which means “pillared place dedicated to the Creator.” The O was a solar image. The Sun was the Creator's symbol or emblem. Heliopolis (Biblical On) was called “Iunu” which means "place of pillars" because it was constructed with many pillars.

The Aramaic word for sign/mark is Atha and the Hebrew word for the same is 'oth. The A represents horns of the bull or the ox and the O is a Sun symbol. Both marks represented the Creator among the Archaic Afro-Asiatics. Divine appointment of a ruler was symbolized by the Y, a solar cradle.


Archaic peoples moved along major water systems and mountain ridges. The signs inside caves largely have been protected from the elements and are now being studied. Genevieve von Petzinger has codified these ancient marks and finds great uniformity, especially among the earliest symbols. Her findings suggest that graphic communication was widely used by archaic peoples. Many of the signs that were written near the water have been destroyed, except for the ones preserved by the arid conditions in the Sudan where the waters long ago receded.

The 4th millennium was a watershed of cultural change throughout the ancient world.  This marked the beginning of the Bronze Age and the rise to power of the early kingdoms such as Sumer and the kingdom of Menes who united the Upper and Lower Nile regions and ruled from 3407-3346 BC. Written signs and spoken languages tended to depend on the rulers.

George:  Thanks for this Alice. I went through it. This is very eye-opening! I don't think very many people know about this.


You wrote: "Arabic, Aramaic and Hebrew share a common proto-system."

So I guess it's possible that the Ainu/Annu took these paleo scripts with them when they migrated to other lands. The Hebrews may have just used the same paleo scripts when they wrote the Old Testament. Is this a safe assumption?


Alice: I believe the evidence supports the view that many of the languages in the Afro-Asiatic family have words that can be traced back to biliteral roots found in Africa. Some of the figures or marks found in later scripts are found on Proto-Saharan pottery and on petroglyphs in Sudan and Somalia.

Before the Old Testament books - originally all separate clay tablets or scrolls - there were Paleo-Hebrew writings found in the region of Judah and Edom. Mostly these were commercial records, trade agreements, and political records. They were sealed with Paleo-Hebrew bullae/seals, many of which used the Holy Name or variants of the Holy Name like Yah or Yahu.

Hittite court records mainly were written using Akkadian cuneiform, the script of Nimrod's territory. Many ancient Hittite signs resemble those of the old Vinča culture, Turkic runes, and the ancient Cypriote signs. Turkish scholars believe that the Hittites exercised political and commercial influence in the Balkans and the region of Turkey as early as the 18th millennium BC. This may be one explanation for obvious points of contact between the scripts of Indo-European and Afro-Asiatic peoples. 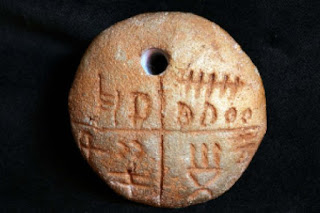 The three Tărtăria tablets were discovered in 1961 at a Neolithic site in the village of Tărtăria, Romania. One is shown above. The tablets were buried with the burnt, broken, and disarticulated bones of an adult male. The tablets date to around 5300 BC and bear incised the Vinča symbols.

The oldest scribed symbols found in Central Europe have been found on Neolithic artifacts (7th to 5th millennia BC) of the Vinča culture. Some scholars believe that the Vinča signs may represent the earliest form of writing, predating ancient Egyptian and Sumerian writing by thousands of years. What is known of these signs is limited since all the inscriptions are short and found on burial objects. This is fascinating because ritual burial among these Neolithic peoples was accompanied by written signs, suggesting a priest-scribe caste.

Here are some of the Vinča signs:

The Serbian language has preserved many of the older Nilotic words. For example, in Ancient Egyptian the eye of Horus is called vidjet. In Serbian vidjet means "to see." There are many linguistic connections between words in Serbian, Sanskrit and the Nilo-Saharan languages. The Hittite, Cypriote and Serbian phoneme (basic sound unit) for "toward" is the same.

The Neolithic Vinča culture in Southeastern Europe, dated to the period 5500–4500 BC. It is named for Vinča-Belo Brdo, a large tell settlement discovered by Serbian archaeologist Miloje Vasić in 1908. The Vinča culture was well entrenched in what is today modern Serbia. The 7th millennium BC temple at the Blagotin site in Serbia attests to the presence of ruler-priests who served at the Blagotin Sun temple. The site reveals that these priests had the astronomical and mathematical knowledge required to align the temple to the daily and seasonal movement of the solar arc and to determine solstices and equinoxes.