Cosmologies of the Ancient Near East 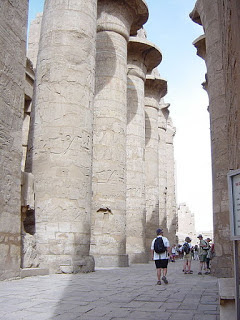 I am often asked to offer an opinion on the popular work of Dr. John Walton (Wheaton College) and will do so briefly in this post.


John Walton's conclusion that Genesis 1 reflects a seven-tiered Babylonian temple imposes a later period onto a narrative that has both a Babylonian layer and a much earlier Nilotic layer. I believe his understanding of the cosmos as a celestial temple is correct. However, the temples that Abraham knew were pillared Sun Temples at high elevation near sources of water. These were the pattern for the temples built by the Horite Hebrew at Nekhen on the Nile (4000 BC) and the temple built by Solomon (c. 950 BC) in Jerusalem.

The Babylonian temple had seven tiers because the number seven represented the number of visible celestial bodies: Sun, Moon, Mars, Mercury, Jupiter, Venus, and Saturn. The architecture was intended to express a celestial reality on earth. The temple became the archetype of the heavens above, a common architectural phenomena among ancient populations as Mircea Eliade demonstrated in his book The Sacred and the Profane. 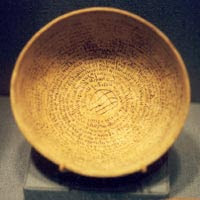 The celestial bodies were sometimes depicted as bowls from which curses and blessings were poured out on the earth. The worst possible curse involved seven bowls or a seven-fold pouring. Cursing or "incantation bowls" such as the one shown above have been found in Mesopotamia and Egypt. This Egyptian cursing dates to 3000 B.C.

The bowls are mentioned in Revelation 15:7 as containing God's wrath. The Greek word for wrath is orge, the same word that appears in Romans 1:18: "For the wrath of God is revealed from heaven against all ungodliness and unrighteousness of men, who suppress the truth in unrighteousness."

Clearly, biblical populations conceived of the cosmos in different ways. Further, scholars recognize that the conception of the cosmos changed over time. The one consistent theme is that heaven and earth are connected. This connection is expressed in the story of Jacob's ladder and Paul’s mystical experience of being taken to the third heaven. By Paul's time Jewish thinkers conceived of heaven as having seven tiers similar to the stepped temples of Babylon. Dr. Walton interprets the seven days of creation in this light. He focuses on this cultural context, which is not the context of Abraham and his ancestors.

It is misleading to generalize the cosmology of the Ancient Near East based on a single period and cultural context. Not all biblical populations viewed the earth as flat, or as a bowl like dome (raqiya or rakiya) above. Some viewed the cosmos has having multiple layers of the firmament and other layers beneath the earth. Generally, the cosmos has been perceived as 3-tiered: the realm above (heaven), the plane of earth's surface (between the east and west), and the "deep" under the earth.

The Apostle Paul speaks of being taken to the "third heaven" in 2 Corinthians 12. In the Second Book of Enoch, chapter 8, the third heaven is described as the heaven "whereon the Lord rests, when he goes up into paradise."


It is likely that Abraham was influenced by the Nilotic cosmology in which the plane of earth was what was visible from the eastern horizon to the western horizon. As a Hebrew, Abraham would have conceived of the cosmos as the earth and the visible firmament that stretched from the rising of the sun to the setting of the sun. Among the ancient Hebrew the sun was the emblem of the Creator (Ra/Ani) and his son (Horus/Enki). The sun was believed to inseminate the earth and to overshadow those divinely appointed to rule.

"The heavens declare the glory of God; and the firmament shows forth his handywork...Their line is gone out through all the earth, and their words to the end of the world. In them he has set a tabernacle for the sun, which is as a bridegroom coming out of his chamber, and rejoices as a strong man to run a race. His going forth is from the end of the heaven, and his circuit unto the ends of it: and there is nothing hid from the heat thereof." (Psalm 19:1-6)

The Hebrew also conceived on earth resting on pillars. Genesis 1 is layered with both Babylonian and earlier Nilotic elements. The young earth had many active volcanoes. Some were above the surface (extrusive) and others were beneath the surface (instrusive). Many volcanic eruptions took place under the sea. According to Genesis 1 God separated the dry land from the sea as one of the first acts of creation. We can imagine a great sea with steam rising from deep underwater fissures in the earth. Now imagine volcanoes rising up from the sea. These are the "pillars of the earth" described in Psalm 72, Job 9:6, and I Samuel 2:8.

Job 9 speaks of God "Who shakes the earth out of its place, and its pillars tremble." I Samuel 2:8 - "For the pillars of the earth are the Lord’s and he had set the world upon them." Among Abraham's Nilotic ancestors the original volcanic mound that emerged from the sea was called TaTJaNuN which means the "twin pillars of God in the water."

Pillars were used to mark sacred places, royal tombs, and the entrances to temples. In the Ugaritic creation story the twin mountains likewise are indicated by the sign T. The mountains Trgzz and Trmg emerged from a universal ocean and held up the firmament. The temples that Abraham knew were pillared Sun Temples. 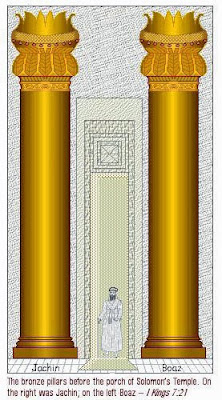 The twin pillars at the entrance to Solomon's temple (shown above) cast back to the Nilotic conception of the Earth (ki in Akkadian) as a pillared temple for the Sun. It may be that "ra-ki-ya" refers to the place above earth were the Creator Ra was thought to dwell. It certainly is related to the concept of vastness or an expanse (Ancient Egyptian rahbo - vast; Akkadian rabum, great, vast).

Related reading: Sun Cities of the Ancient World; The Pillars of the Earth; Sacred Mountains and Pillars; Sheol and the Second Death; The Ra-Horus-Hathor Narrative; The Swelling of Sun and River; The Nilotic Context of Genesis 1

I don't think it is a coincidence.