Alice C. Linsley
Ishmael (Yishmael) is recognized as one of Abraham's sons in Christianity, Islam, and Judaism. He was born to Hagar (Hājar), an Egyptian concubine (Gen. 16:3). According to the marriage and ascendancy pattern of Abraham the Hebrew, this meant that Ishmael was not Abraham's proper heir. The proper heir would be Isaac, the first-born son of Abraham's first wife (and half-sister) Sarah.
Ishmael was a sent-away son, like Abraham. The circumstances of his being sent-away vary in the book of Genesis. According to one account, Ishmael and Hagar were sent away ("cast out") because of Sarah's jealousy (Gen. 21:10). This account cannot be verified and seems to rely on Talmudic sources. According to another account, Abraham's eight sons were given gifts and sent away from Isaac's territory before Abraham died (Gen. 25:5,6). This account aligns well with the biblical kinship data.
Ishmael was ethnically Egyptian since ethnicity was traced through his Egyptian mother. Ishmael married an Egyptian (Gen. 21:21) as the Egyptians have been particular about preserving their ethnic identity. (Even today the government of Egypt makes it illegal for Egyptian men to marry Jewish women. To be an ethnic Jew one must be born of a Jewish mother.)
Hagar would have been of a high social status to serve as a handmaiden to the Hebrew princess, Sarah. Another handmaiden and concubine, according to the Septuagint, was Masek. Her son was Eliezer (dm/Masek means son/blood of Masek, not Damascus). Genesis 25:6 makes it clear that Abraham had more than one concubine. The Hebrew literally speaks of Abraham's sons by concubines (Speiser on Genesis, Anchor Bible, p. 197).
If the pattern of Hagar and Masek is the same as the pattern of Jacob's concubines, Bilhah and Zilpah, then Ishmael and Eliezar were chiefs over settlements and were the heads of clans along with Keturah's sons Zimran, Jokshan/Joktan, Medan, Midian, Yishbak, and Shuah (Gen. 25; Also see the Joktanite Clans).
Ishmael is regarded as a patriarch in Islam and should be considered such in Christianity and Judaism. His twelve "tribes" parallel the twelve clans/tribes of Jacob and the twelve clans/tribes of Terah's proper heir, Nahor (Gen. 22:20-24). These are Ishmael's sons, and their names by their dwelling places and settlements: twelve chieftans of as many tribes: the firstborn of Ishmael, Nebajoth, then Kadar, Adbeel, Mibsam, Mishma, Dumah, Massa, Hadar, Tema, Jetur, Naphish and Kedemah (Gen. 25:12-16).
It appears that the first-born sons of wives ruled territories while the first-born sons of concubines ruled settlements in obedience to their ruling brothers. This is similar to the "nomes" of Egypt, where each was ruled by a tribal chieftain whose allegiance was to the higher ranking ruler.
Genesis 25:18 describes the extensive region controlled by the Ishmaelite chiefs: "from Havilah, by Shur, which is close to (opposite) Egypt …" The mention of Havilah is problematic since it is the southern limit of ancient Eden (Gen. 2:11) in the Upper Nile, and also the region in southern Paletsine where Saul defeated Amalek: "from Havilah as far as Shur, which is east of Egypt" (1 Sam. 15:7). (Ha'vilah likely means a place where waters part to form a V, or a spreading out of land, as in a valley.)
Some maps show the Ishmaelite terriotry extending from Shur to Havilah, as in this map. 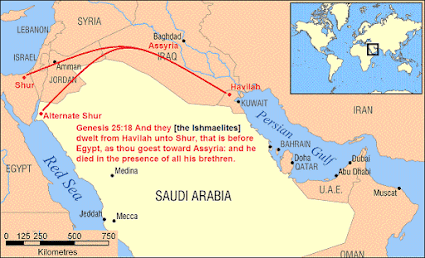 There is no extra-biblical evidence to verify that the Ishmaelite clans were nomads. Instead, the evidence indicates that they were traders and merchants with their own settlements. This explains why they are associated with the Midianite traders in Genesis 37:25, 28 and 36. This, with the location described as "opposite" Egypt, suggests another possibility. The Ishmaelites may be identified with the Dedanite traders who resided opposite Egypt. If so, the Ishamealites' territory might correspond to that of ancient Dedan as shown on this map. 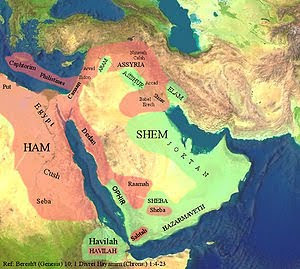 This second map aligns with the data that places the Ishmaelites among their kinsmen (Jewish Study Bible, p. 53) and having settlements over against all his [Egyptian] people (Oxford Annotated Bible, p. 30).
This means Ishmael the Egyptian ruled over territory along the Red Sea opposite Egypt, extending north to the Shur Desert. The clan of one of his sons Tema is mentioned in an inscription of Tiglath-pilesar III in association with the clan of Sheba (shown on the second map).
As for his hostility to his kinsmen, the Hebrew in Genesis 25:18 is uncertain. Here are possible readings: "they ranged/camped among their kinsmen;" "made forays against his various kinsmen;" "fell upon" his kinsmen, and "held his own" against his kinsmen. Among merchants there is competition for customers and efforts to control lucrative trade routes.
As a son of Abraham the Hebrew, Ishmael likely served the same High God as his father and probably embraced the substance of Abraham's faith. As an Egyptian, he also would have embraced belief in bodily resurrection. In the Hebrew his name has the Canaanite Y - Yishmael, a mark indicating divine appointment to rule. Indeed, God did bless Ishamel, as his father requested (Gen. 17:18). The evidence is sufficient to view Ishmael as an affluent and influential patriarch who had much in common with the Horite Hebrew ancestors of some Jews and some Arabs.
Related reading: The Social Structure of the Biblical Hebrew; The Calling of Abraham; Abraham's Sons; Sent-Away Sons; The Afro-Arabian Dedanites; Some Jews and Some Arabs Have Horite Ancestry; Isaac's Wealth
Posted by Alice C. Linsley at 6:42 PM