Some Jews and Some Arabs Have Horite Ancestry


J1 and T1 have a wide dispersion: Anatolia, Yemen, north-east Africa, Saudi Arabia, Madagascar, the Fertile Crescent, and the Caucasus. Where J1 and T1 are found in high frequency, mtDNA haplogroups HV, N1 and U3 are also present. ZS226 is a subclade of J1. ZS227 includes the Kohanim (priest) haplotype found among both Jews and Arabs.


"[...] Professor Martin Richards, who heads the University of Huddersfield's Archaeogenetics Research Group (and who participated in the 2002 study), and colleagues sequenced 74 mitochondrial genomes and analyzed more than 3,500 mitochondrial genomes - far more data than the 2006 survey, which reviewed only a short length of the mitochondrial DNA, containing just 1,000 or so of its 16,600 DNA units, in all their subjects. [...] According to Nicholas Wade of the New York Times, Doron Behar, one of the key authors of the 2006 analysis, said he disagreed with the conclusions, but has provided no detailed critique as yet. Wade also talked to David Goldstein, who said he believed the estimate that 80 percent of Ashkenazi Jewry originated in Europe was too high considering the unpredictability of mitochondrial DNA data. [...]"

For the purposes of this article, we are able to speak of some Jews as the descendants of Abraham and his ancestors, but not all Jews.

Other Arabs related to Abraham and his ancestors are found in Arabia. Josephus reports that the descendants of Abraham by Keturah were called "Horites" and, quoting an ancient historian, speaks of them as "conquerors of Egypt and founders of the Assyrian Empire." Keturah was Abraham's cousin bride and her first born son was Joktan (Yaqtan). He is identified with the Joktanite tribes of Arabia. The Jews call their ancestors Horim and the Muslims refer to their righteous ancestors as Houris. Horim and Houris are "Horite" in English.

Abraham's people were Horite Habiru (Hebrew), a caste of ruler-priests who originated in ancient Kush. Their ancestors were cattle-herding Proto-Saharans who dispersed widely about 40,000 years ago. J1-FGC11, the most common lineage among Bedouins, Jews, and Arabs, is related to that ancient herding culture. Other haplogroups of interest to Biblical Anthropologists include Mt-DNA L and Y-DNA R1b.  In human mitochondrial genetics, L is the mitochondrial DNA macro-haplogroup that is at the root of the human Mt-DNA phylogenetic tree. As such, it represents the most ancestral mitochondrial lineage of all currently living modern humans. All modern humans have ancestry that is traced to Africa.

The Habiru spread their religion across the ancient Afro-Asiatic Dominion. That is why many of the religious practices of peoples in Southern Europe, the Levant, and West Aisa share many common traits.

The Horites were devotees of Horus, the archetypal "son" or "seed" of the Creator. The Ra-Horus-Hathor narraive is the proto-Gospel by which some of Abraham’s descendants would recognize Jesus as the Messiah and the fulfillment of God's promise (Gen. 3:15). The Virgin Mary, a woman of the Horite Habiru bloodline, brought forth the Seed who crushes the serpent's head and restores Paradise.

Isaac, one of Abraham’s 9 sons, was a Horite. His tribal confederation consisted of 3 sons: Esau, Jacob and Yishbak (the grandson of Yishbak the Elder who is named in Gen. 25:1). This is consistent with a trait of Horite rulers whereby 3 sons were designated as heads of clans and these 3 clans represented a tribal unit. Other examples include Jubal, Jabal and Tubal, Uz, Huz and Buz and Og, Gog and Magog.  Not all 3-son confederations involved alliterative sets however, as is apparent from the confederations of Haran, Nahor and Abraham. However, the common occurrence of alliterative sets in naming is suggestive of this confederation for Abraham's sons: Yitzak (Isaac), Yishmael (Ishmael) and Yishbak.

Yishbak means “sent away” and this is referenced in Genesis 25:6 which says that Abraham’s gave gifts to all his sons and sent them away from Isaac.

Martin Noth, in his seminal work "The Scheme of the Twelve Tribes of Israel" (1930), showed that the Twelve Tribes of Israel did not exist prior to the covenant assembly at Shechem described in the book of Joshua. The 12-tribe organization appears to be an attempt to neatly classify the ruler descendents of Noah according to a celestial pattern. The older organization comprised three sons of the same father. Where three sons appear in Genesis we have a code indicating a joining of three clans or a tribal unity. Perhaps this is why Leah named her third son Levi, meaning "joining" (Gen. 29:34). Leah probably hoped that she would be credited (and loved?) by providing Jacob with the three sons necessary to establish a tribe.

The 3-son confederation of rulers is still evident long after Abraham. The Kushite ruler Piye united Nubia and Egypt and established the 25th Dynasty. Before his death, Piye divided his kingdom between his 3 firstborn sons, whose names were Sheba, Shebit and Tahar. The appear in history as Sheba-qo who ruled in Thebes, Shebit-qo who ruled in Napata, and Ta-har-qo who ruled in Memphis. Sheba-qo revived the office of high priest, which he awarded to his son Hori-makhet who was high priest in Thebes. Here we see a clear reference to Horus. Hori or Huri refers to Horus and Horite. Clearly, the term Horite can't be taken anachronistically when speaking of Abraham's descendants as late as 700 B.C.

Meroitic had an honorary suffix qo as in the names Sheba-qo and Shebit-qo. These are linguistically equivalent to the biblical name Sheba, an ancestor of Abraham and his cousin-wife Keturah. Sheba is named in Genesis 10. The clans of Sheba (Sabaea) are close relatives of the Joktanite tribes of South Arabia. The territory of Sheba is referred to 24 times in the Hebrew Bible. Beer-sheba, Keturah's home, was at the northern end of the territory of Sheba. The Joktanite tribes descend from Abraham through Keturah.


Intermarriage Among the Horite Ancestors of Arabs and Jews

Abraham’s Horite sons married kin so it is not likely that all Abraham’s descendants through Isaac are Jews. Both Arabs and Jews have Horite ancestors. This is why the Kohan genetic marker is found among Arabs as well as among Jews. The Horite priestly lines intermarried, that is, they practiced endogamy. The dispersion of these ruler-priests corresponds to the aggressive kingdom-building activities of the archaic rulers. J1 and T1 have a wide dispersion: Anatolia, Yemen, north-east Africa, Saudi Arabia, Madagascar, the Fertile Crescent, and the Caucasus. Where J1 and T1 are found in high frequency, mtDNA haplogroups HV, N1 and U3 are also present. ZS226 is a subclade of J1. ZS227 includes the Kohanim (priest) haplotype found among both Jews and Arabs.

Both Arabs and Jews are descendants of Ham and Shem whose lines exclusively intermarried, as did the lines of Cain and Seth before them. The marriage pattern involved 2 wives living in separate households on a north-south axis. One wife was a half-sister (as was Sarah to Abraham) and the other wife was a patrilineal cousin of niece (as was Keturah to Abraham).

The brides are the key to understanding the ethnicity of Abraham's people who were Horites, a caste of ruler-priests who originated in ancient Kush. The Kohan DNA or "priest marker" is identifiable and distinctive because Horite priests married daughters of priests exclusively. The haplotype studies based on mitochondrial samples reflect the women since we receive the mtDNA from our mothers. DNA studies confirm that the Horite ancestors of the priests of ancient Israel did marry exclusively within the priestly divisions/lines, which is what analysis of the Biblical genealogy material shows. This is the blood ancestry of Jesus Christ our Lord.

Isaac had 2 wives, as did all his Horite ruling ancestors. The wife who isn't mentioned was a half-sister who lived in Beersheba. She bore Isaac a son named Yishbak, so Isaac had at least three sons: Esau who married a Horite daughter (Gen. 36), Jacob who married into the Horite clan of Nahor, and Yishbak (Ishbak). Yishbak the Elder is mentioned in Gen. 25:1. He is Abraham's son by Keturah. His daughter married Isaac and named their firstborn son Yishbak, according to the Horite custom which I have identified in my 34 years of research on Genesis. I've called this distinctive practice "the cousin bride's naming prerogative." 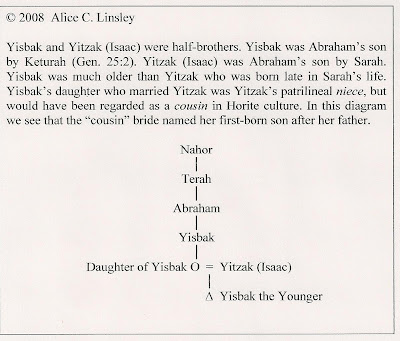 Isaac's three sons were Esau, Yacob and Yishbak. Since Isaac married his half-sister before he married Rebecca, as was the pattern among Horite rulers, Yishbak is likely Isaac's firstborn son. Yishbak, son of Isaac is not explicitly mentioned in Genesis but he is found in analysis of the Genesis genealogies. He is inconvenient for those who seek to perpetuate myths about Abraham as a Jew and Isaac as the line through whom the Jews claim exclusive rights to the Land of Palestine.

The evidence for Isaac’s sister wife is rather hidden, as is the identity of Abraham’s Horite mother. It appears that the final editors of Genesis wanted to preserve the claim of Isaac as the son of promise through whom Israel would claim the Land. It wouldn’t do to admit that Isaac had other children by an Arabian wife of the house of Sheba, or that Abraham’s mother was the daughter of a Horite ruler-priest. Yet the kinship pattern of Genesis provides the essential information to draw these conclusions and to justify them on the basis of the text alone.


Related reading:  The Urheimat of the Canaanite Y; The Shock of Mohammed Atta's Afterlife; Who Were the Horites?; Christ's Kushite Ancestors; Are Zionism and the Bible in Agreement?; The Afro-Arabian Dedanites; Petra Reflects Horite Beliefs; Messianic Jews and the Antecedents of Judaism; Who Was Abraham?; The Nubian Context of YHWY;  Busting Myths About Abraham; Nicholas Wade. "Genes Suggest European Women at Root of Ashkenazi Family Tree." The New York Times (October 9, 2013); Religion of the Archaic Rulers
Posted by Alice C. Linsley at 2:06 PM

Hi, you write "ZS227 includes the Kohanim (priest) haplotype found among both Jews and Arabs." Again I need to point out that J1 ZS227 is almost exclusively found in Ashkenazi "Cohens" but not at all in Ismailite Arabs and Yemenis who claim descend from Abraham. All semitic arabs and ethiopians belong to the J1 Fgc11 clade which is almost 4000 years old. It is considered truly semitic and abrahamitic by some scholars. How do you evaluate this fact ? Please read:" J1-ZS231 (Y3081, ZS231, ZS227) formed 5300 years ago. This lineage is mainly apparent in both East Europe and West Asia. This lineage is very low among North Africans and Semitic people, but a few samples of J1-ZS231 or J1-ZS227 in Egypt might be related to recent historical events during the Islamic and Ottoman periods. It’s also possible to see this lineage slightly among Mongolians. Also, J1-ZS227 is one of the most common subclades among Ashkenazi people of East Europe, and it is also present slightly among West Asian ethnicities, which makes us think whether this might be due to historical events related to Khazar Khaganate in the part of West Asia." http://www.haplogroups.org/haplogroup-j1-y-dna-m267

J1-FGC11, the most common lineage among Bedouins, Jews, and Arabs, is related to the ancient populations of Abraham's cattle-herding Proto-Saharan ancestors.

Noah's homeland was the region of Lake Chad. This is also one of the places with the greatest density of population in the R1b group. These are Abraham's ancestors.