Alignment of the Oldest Mosques

The prayer alignment of some 200 mosques is not to the Ka'bah in Mecca. Neither do the original prayer orientation of the oldest mosques in Cairo, Baghdad and Wasit. They triangulate to a single point a little north of Dedan, probably Al-`Ula, one of several important ancient Afro-Arabian sites that were shrines in ancient times. Another is Al-Hijr, to the northwest of Al-Ula.  Al-Hijr which was earlier simply HR, a reference to Horus, the "son" of the Creator born to Hathor. Hathor was the patroness of the metal workers among Abraham's Horite people. Incense was supplied to these ancient shrines in ka-Hr-ka-jars, that is royal jars consecrated to Horus by Horite priests. 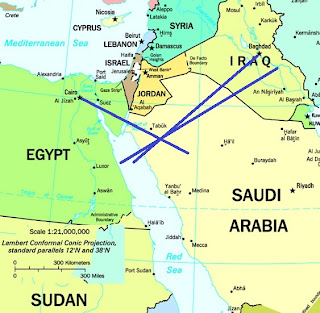 Al-Hijr is in northern Saudi Arabia, about 1400 km to the north of Riyadh. It is called "Mada'in Saleh" and is considered one of the oldest settlements in the Saudi Arabia. Mada'in Saleh was recognized by the UNESCO as a site of patrimony, the first world heritage site in Saudi Arabia.

The people of these ancient settlements spoke languages identified as Thamudic. Within this group three dialects have been identified by linguists: Thamudic B, C and D. These were spoken at Petra and are mentioned several times in the Quran along with prophet Saleh.

All mosques have a niche called a "qiblah" which shows the direction of prayer. The older mosques are aligned with a point north of Mecca but south of Jerusalem. If early mosques were aligned toward northern Arabia or Jerusalem, a qiblah facing the Ka'bah represents a later development. (Source: BBC News)

The qiblahs of the oldest mosques in Mecca, Iraq and Egypt do not align with Mecca. Instead they align to the region of Dedan, home of some of Abraham's Horite ancestors. Abraham's Horite people spoke languages in the North Arabian group (sometimes called "Dispersed Oasis North Arabian"). Abraham's ancestors controlled this area and spread their religious beliefs along the water ways, expanding their influence across the ancient Afro-Asiatic Dominion. Abraham's six sons by Keturah are the founders of the Joktanite clans who dwell in the region of Mecca and Southern Arabia.

The ancient Afro-Arabians included the clans of Joktan and Yishbak, Abraham's sons by Keturah and the clans of Yishmael the Egyptian, Abraham's son by his concubine Hagar. The Afro-Asiatic Arameans became linguistically distinct in the time of Peleg and his brother Joktan the Younger. However, the ruling lines of the Afro-Arabians and the Arameans continued to intermarry exclusively according to the marriage and ascendency pattern of the ancient Horites.

Mount Ithlib (map) is located to the north-east of Al-Hijr. It was a Horite shrine later dedicated to the Nabatean deity Dushara. Đū Shará (Arabic: ذو شرى‎) means "Lord of the Mountain." It is transliterated as "Du-sares." The Lord of the Mountain was worshipped by the Nabataeans at Petra and Madain Saleh. The Dushara sanctuary at Petra contained a great temple in which a large cubical stone (Ka'ba) was the centrepiece. Ka-Ba is an Egyptian word that refers to the body-soul.

Abraham's Horite ancestors controlled this part of Arabia. The Nabateans appear to be descendants of the Horites. Keturah and Abraham were the progenitors of the Joktanite clans of Arabia who still reside in this region.

The three mosques under consideration reflect a late development over a very ancient earlier religion. The Wasit Mosque (built 705 A.D.) and the Kufa Mosque (built about 698 A.D.) align to a point in northwest Arabia, not to Mecca. According to Islamic tradition, Mohammad's household taught that Kufa Mosque was founded by Adam. Another tradition states that it was built by the angels in accordance with Gabriel's revelation to Prophet Muhammad. No other narrator of Islamic tradition has referred to this however.


Related reading:  The Ra-Horus-Hathor Narrative; Hittite Religion; The Dedanites and the Edomites Intermarried; The Afro-Arabian Dedanites; Who Were the Horites?; Peleg: Time of Division