Was Abraham the First Jew?


The answer to that question is NO. Abraham was not a Jew and he did not speak Hebrew. He was a Hebrew or Habiru/'Apiru. The Habiru were an ancient caste of ruler-priests who served at the Sun temples of the archaic world long before the time of Abraham.

It is time that the narrative of Abraham as the first Jew go away.  It is entirely false.

Abraham is a pivotal figure of biblical history. He is the ancestor of many peoples and he is a descendant of Nilo-Saharan peoples who dispersed across the ancient world. His ancestors were known by various names: Habiru (Hebrew); Horim (Horite); Shasu of Yahweh, Anu or Hanu (Ainu), and the Tera-neter (priest of God). Tera-neter refers to a ruler-priest of the Anu, a pre-dynastic people of the Upper Nile. Abraham’s father has the title Tera, which means priest. The Ainu spread abroad, taking their religious beliefs and practices with them. They migrated to Northern Japan and into Eastern Canada. In the Japanese language "tera" means priest.


Here is a NOVA interview with Dr. Shaye Cohen in which he presents the Jewish myth of Abraham.

Q: Was Abraham the first Jew?

Shaye Cohen: The biblical narrative gets going with Abraham in Genesis chapter 12. Abraham in turn Isaac, in turn Jacob, in turn Joseph and the twelve tribes, this brings us directly to the people of Israel and the covenant at Sinai. So Abraham is thought of as the first Jew, the archetype. 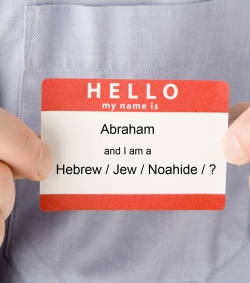 Historically speaking, of course, this doesn't make much sense. It's hard to talk about Jews living around the year 1800 B.C.E. or anytime near that. We don't have any of the institutions, beliefs, social structures in place that will later characterize Jews and Jewishness. So in a mythic kind of way we can say that Abraham recognizes God and that Abraham launches the process—biological and social and cultural—that will culminate in the people of Israel, who in turn will become Jews and the purveyors of Judaism. But to call Abraham Jewish simplifies things very dramatically.


Q: In terms of things that characterize being Jewish today, where does Abraham stand?

Cohen: In modern terms, the Jewishness of Abraham fundamentally consists of belief. He communicates with God, and God communicates with him. Now, the rabbis of old imagined that Abraham observed the whole Torah, that Abraham observed all the commandments: He observed the Sabbath, he observed the festivals, he observed the laws of culture and food. He observed everything, not just circumcision, which is attributed to him explicitly in Genesis, but everything else as well. Because how can you imagine our forefather Abraham, the founder of Judaism, not observing the Jewish rules, not observing the Jewish laws? This is a wonderful anachronism, a charming conceit. But historically speaking, how could it be?

Cohen: Is Abraham the founder of monotheism? The texts in Genesis simply have Abraham talking to God and God talking to Abraham, that's it. Later Jews could not imagine such events without explaining more fully how it was that Abraham came to recognize God and why it was that God chose Abraham. And one of the most famous of these stories recounts how Abraham, the philosopher, sits and contemplates the natural order and realizes that there must be a first cause, that everything has a purpose. And behind the world that we can perceive, there must be some force that we cannot perceive but whose existence we can infer. That's how Abraham came to believe in God. And he went home to his father, Terah, who in the story is an idol maker, and Abraham then smashed all of his father's idols. And numerous Jewish children are convinced to this day that the story is found in the book of Genesis and are always shocked and amazed to discover that it isn't.

Q: Does the Abraham account in Genesis have a central message, a central purpose?

Cohen: It teaches sacred values, sacred ideas—how to relate to God, to have faith in God. It's also simply a story about our founders. We humans are always curious to know about where we come from. All cultures have stories about their founders or great figures of the past. So here, too, we have stories about our great founder figure, Abraham, who sets the process going that makes us who we are, we meaning the people of Israel, the covenantal people.


Abraham and his ancestors were ethnically Kushite and belonged to the royal priest caste known as Horites. The Horites are also known in ancient texts as Habiru (Hebrew) and the Shashu of YHWY. The were rulers of the ancient world with a distinctive marriage and ascendancy pattern.

This is revealing. I always thought Abraham was Jewish. Am I wrong to think that Abraham marched to the beat of the spiritual calling and drum of God who called him to a bigger purpose and introduced monotheism? Also, how was it so easy for Abraham to go on his own path and follow God without serious consequences from his family and tribe? Tribes, sects, etc. do not allow one of their own to beak away so easily. It must have been such a process for him to just walk away from it and also bring his family along. Yet, God 'called" Abraham and we do not know what was involved when God said "come." Is it fair of me to say that such is similar when Jesus called the fisherman to "come" with him and to be his dicisples and they simple dropped everything and followed him?

The divine call to venture forth trusting in God is a theme of all great hero narratives, ancient and modern. This is also a theme of the Bible. See these articles on Abraham's calling and sent-away sons. Consider how all of this is Christological and pertains to The Son:

Interesting. Abraham did enter into a covenantal relationship with YHWH. The setting apart through circumcision began with Abraham in Gen17. Such relationship and being set apart typifies 'being Jewish' even till today. So if not Abraham then who?

The Bible designates Abraham as Habiru/Hebrew. The Habiru or 'Apiru were a caste of ruler-priests who dispersed widely in the archaic world. They practiced circumcision long before Abraham's time, as did his Proto-Saharan ancestors, the ancient Egyptians, the Shasu, and the Edomites.

The term "Jew" applies to people of Judah after the time of the Babylonian captivity. See this: