No Kingdom by Deception

An inheritance may be gotten hastily at the beginning; but the end thereof shall not be blessed. (Proverbs 20:21)


According to Genesis 25, Esau sold his birthright to Jacob in exchange for something to eat. This was Jacob's first attempt to supplant Esau, Isaac's proper heir. The narrative makes good sermon material with the moral that we should value the inheritance of the Father above our stomachs. Afterall, it was our stomachs that got us into trouble in the Garden when Eve took the fruit and gave it to Adam, and they ate contrary to God's command.
This preaches well as an object lesson for those who aspire to be children of God, but is this a proper application of this passage? Let's look closely at the text.

29 Once when Jacob was cooking some stew, Esau came in from the open country, famished.
30 He said to Jacob, “Quick, let me have some of that red stew! I’m famished!” (That is why he was also called Edom.)

33 But Jacob said, “Swear to me first.” So he swore an oath to him, selling his birthright to Jacob.

34 Then Jacob gave Esau some bread and some lentil stew. He ate and drank, and then got up and left. So Esau despised his birthright (cf. Hebrews 12:16)

The English word "birthright" is b'khora in Hebrew. It is composed of the words barak and khora.  Barak means "blessing" in Hebrew, Arabic and Ancient Egyptian, and khora refers to the Horite Hebrew priesthood. Jacob attempted to gain something that pertained rightfully to Isaac's proper heir, Esau. This was bound to fail unless Jacob also received the blessing of the first-born. This he latter attempted with his mother's help.

One of Moses' brothers was named Korah. It refers to a priest who has shaved his body in preparation for service in the temple. Korah was a direct descendant of the Seir the Horite ruler (Genesis 36). 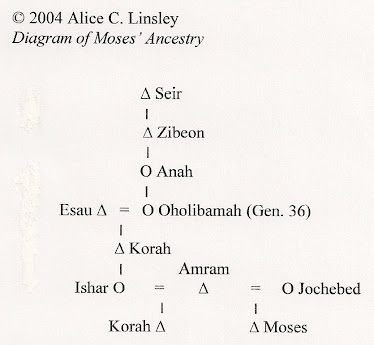 The birthright in this story pertained to the Horite Hebrew ruler-priests which was passed from father to the first-born son of the ruler's first wife who was usually his half-sister (as was Sarah to Abraham). We note that Rebeccah was not Isaac's half-sister. She was his second wife, a patrilineal cousin (as was Keturah to Abraham). This means that Jacob would serve in the territory of his maternal grandfather which was in Padan Aram. Indeed, that is what Jacob did. His first attempt to take control of Isaac's territory failed. The kingdom that he attempted to gain by deception slipped away from him.
In the marriage and ascendency pattern of the early Hebrew, the first-born son of the cousin bride belonged to the household of his maternal grandfather in whose territory he would serve. After Jacob's attempt to pass himself off as hairy Esau (his second attempt at deception) Jacob was sent to the territory of Rebeccah's clan. Jacob became a sent-away son.
In Padan Aram Jacob married two wives. After serving at least 14 years, Jacob decided to leave. Now there is a third attempt to deceive. Rachel stole the teraphim in an attempt to claim her father's inheritance for Jacob according to Horite law. His mother attempted to make Jacob Isaac's heir, but this failed. His wife attempted to make Jacob the heir to her father's wealth, and this also failed.

Jacob would not succeed in becoming a ruler by deception. His ascendancy would be by God's grace alone. Such was the case also for his grandfather Abraham and for Jacob's descendants Moses and David.