About Race, Human Populations, and the Purpose of Mankind


Part 7: Answers to Questions about Race and Population
This continues the series "Answers to Hign Schoolers' Questions About Genesis."

Part 1: About God
Part 2: About Adam and Eve
Part 3: About the Serpent
Part 4: About the Flood
Part 5: About the Earth
Part 6: High Schoolers Wonder "Why Abraham?"

Q:  How did the different races come about?

A:  The modern conception of race is not biblical. This explains why the term "race" does not appear in the Bible. All humans share common ancestry and our point of origin is Africa millions of years ago.
Instead of race, the Bible speaks of ethnicities. In fact it mentions many ancient populations and cultures.
In Genesis 25, we find the words goyim and leumim (peoples) to describe two peoples who descend from Jacob by Rebekah.
In the New Testament, the Greek word ethnos is used for peoples or nations. The Hebrew goyim is used to distinguish non-Jews from Jews. Both goyim and ethnos refer to peoples or nations, not to races.

The term "race" is misleading. Today molecular genetics classifies populations by "haplogroups" and people who look very different can be in the same haplogroup.
Haplogroups characterize the early migrations of human populations and can be used to connect ancestry with a geographical region or regions. A haplogroup identifies the descendants of a single individual who first showed a particular single nucleotide polymorphism, or SNP. An SNP is a point on the DNA where a single base changes. This SNP change is passed through generations of the family, clan or caste, and can be used to genetically define populations. Individuals with the same genetic SNP mutation or "marker" can be linked back to the population where the marker first made an appearance.
Y-chromosome and mitochondrial DNA haplogroups have different haplogroup designations. The Y-chromosome traces paternal ancestry and the mt-DNA traces maternal ancestry.

Genesis does not tell us about all the haplogroups. It tells us about the peoples in Y-DNA haplogroup A, the lineage of all human males.

It also tells us about the dispersion of the Y-DNA R1 populations out of Africa, shown on this map. 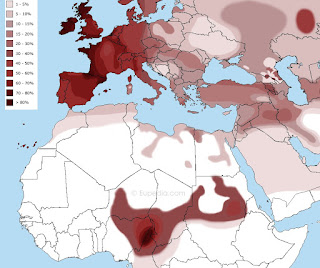 The dark red spot in central Africa is Noah's homeland, the region of Bor-No.
Mitochondrial Eve 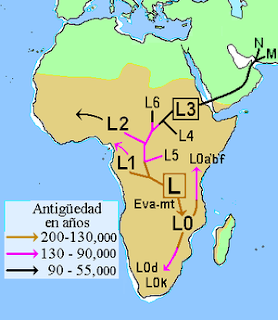 "Mitochondrial Eve" lived about 200,000 years ago. She is the most recent female common ancestor. Found in the energy-producing centers of cells, mitochondrial DNA is passed down the maternal line, and can be traced back to one woman. Both males and females inherit the Mt-DNA from their mothers, but only females pass it on to their children. The people of Genesis are grouped according to their clan mothers: J1, N, X and L1, L2 and L3.

The fact that the lines of Ham and Shem cannot be separated linguistically or genetically underscores that their lines intermarried. It also testifies to the biblical assertion of Genesis 11:1 that all the peoples listed in the Table of Nations were one people with common ancestry. The lines of Ham and Shem intermarried as demonstrated by analysis of the marriage and ascendancy pattern of Abraham's ancestors.

Q:  If Adam and Eve's children married each other, isn't that the sin of incest?

A:  Incest is universally defined as sexual relations between parent and child, not between siblings. In the culture of Abraham's Horite Hebew people, the preferred marriage arrangement for the first wife was a half-sister. Sarah was Abraham's first wife and his half-sister. Jochebed was Amram's half-sister and his first wife. However, sex between parent and child was taboo and forbidden. Such perversion was regarded as so despicable that it was used to slander Lot's Ammonite and Moabite descendants (Gen. 19: 30-38).

Q:  How did the whole earth's population come from just Adam and Eve?

A:  The Bible does not say that all human populations came from Adam and Eve. It does state that all who live today are of "one blood."

It also is not possible to say that the whole earth's population came from Noah's descendants after the flood. Noah lived about 3490-2800 BC when the Sahara experienced a wet period (the African Aqualithic). He lived at the same time as the Horite Hebrew shrine city of Nekhen.

Q:  Did other families exist on earth at the same time that Adam and Eve lived?

A: In the Bible, Adam and Eve are present different ways. Adam is posed as the archetypal first father and Adam and Eve as the original couple. This is an archetype, not to be taken as historical.
However, Adam and Eve are also presented as historical in the Bible. They are the parents of Cain and Seth who married the daughters of Enoch, a contemporary of Adam. The data of Genesis suggests that Adam and Enoch are the ancestors of the rulers listed in Genesis 4, 5 and 11. This may explain why the names Adam and Enoch are parallel in Psalm 8:4:
What is man (Enoch) that you are mindful of him,
or the son of man (ben adam) that you care for him? 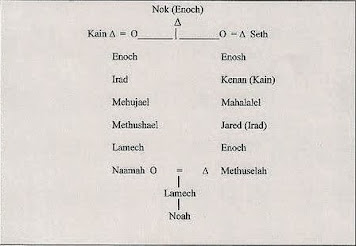 The Apostle Paul speaks of Adam analogically. He draws and analogy between Adam by whom sin and death entered and Jesus Christ, the Second Adam, who overturns the curse, defeats death and restores paradise.

Q:  Did all the peoples of the earth come from Noah's three sons after the flood?

Q:  How many generations are from Adam and Eve to Abraham?

A:  That is impossible to answer this because we cannot know when Adam and Eve existed. We also cannot say exactly how many generations from Cain to Abraham since the Genesis Kings lists do not correspond to generations, but to the reign and succession of the Horite Hebrew rulers.

We do not know how long the rulers of Genesis lived. Noah is said to have lived 950 years. Methuselah lived 969 years. Methuselah's son, Lamech the Younger, lived 777 years. Abraham's father, Terah, lived longer than Jacob by 58 years. The numbers assigned to the Genesis rulers are symbolic and some are linked to astronomical observations. Clearly, symbolic numbers cannot be used to determine actual life spans.

Q:  Why were the men in Genesis so old?

A. The life spans assigned to the kings of Genesis are symbolic. Ancient clay tablets have been discovered that recount the greatness ofassign as much as a thousand years to some Sumerian and Akkadian rulers. However, all these lived normal live spans for rulers of the time. The average life span for rulers was between 73 and 75 years.

St. Jerome notes: "I am reviewing carefully the places in Scripture where I might find old age mentioned for the first time. Adam lived for 930 years, yet he is not called an old man. Methuselah's life was 969 years, and he is not called an old man. I am coming down all the way to the flood, and after the flood for almost three thousand years, and I find no one who has been called old. Abraham is the first, and certainly he was much younger than Methuselah." (Homilies on the Psalms 21)

Jerome observes that Abraham is the first man described as "old" in Genesis. Those who lived before him are not called old because the numbers assigned to them are symbolic.

Q:  Why did God create Mankind?

A: The answer to this question varies from religion to religion. Islam teaches that Mankind was created to live in submission to Allah and for the purpose of worshipping Allah. Qur'an 51:56 states, "I have created the jinn and humankind only for My worship."

The Jinn are divided into followers of Islam and followers of the abased Iblis (a sort of fallen angel). The Jinn were commanded to bow down before Adam, but Iblis refused. God said, "What prevented you from prostrating when I commanded you?" He replied, "I am better than him. You created me from fire and You created him from clay." God said, "Descend from heaven. It is not for you to be arrogant in it. So get out! You are one of the abased." Surah 7 (al-A`raf), 11-13.
In Judaism, Man exists at God's pleasure and has liberty to obey or not to obey God's commands. The rabbis say that "Adam was created from the dust of the place where the sanctuary was to rise for the atonement of all human sin," and this means that sin should not be a permanent or inherent part of man's nature.

Genesis 1 claims that humans are a special creation, fashioned in the image of the God. Christians believe that Mankind was created to enjoy perfect fellowship with God in Three Persons (the Trinity), in whose image and likeness we were made. When we seek God, we are renewed in our intended nature through Jesus Christ, and grow more like Him by the in-dwelling Holy Spirit.


Related reading: Three Portraits of Adam; The Historicity of Noah's Flood; The Marriage and Ascendancy Pattern of Abraham's People; Thoughts on Calculating the Dates of the Patriarchs; Lifespans of Archaic Peoples: John Calvin on God's Motive in Creation