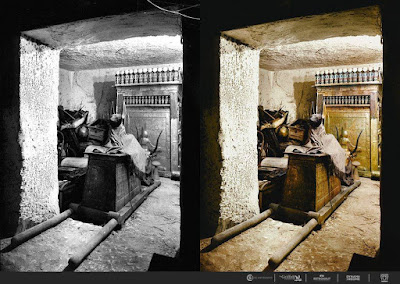 An ark found in the tomb of King Tut. It has Anubis,
one of the four manifestations of Horus, the son of Ra.


In recent years, DNA analysis has shed light on the parents of Egypt’s most famous pharaoh, the boy king Tutankhamun, known to the world as King Tut. Genetic investigation identified his father as Akhenaten and his mother as Akhenaten’s unknown sister.

Genetic studies have shown that Nefertiti was not the mother of King Tut. Tutankhamun was born of Akhenaten's half-sister wife. This means that Akhenaten, as with all the high kings in the R1b haplogroup, had two queens: one a half-sister and the other a cousin (probably patrilineal cousin). This is consistent with the marriage and ascendancy pattern of the Horite rulers of the Nile Valley and those who dispersed into the Arabian Peninsula and the Tigris-Euphrates Valley. It appears that Akhenaten was upholding a tradition received from his ancestors of the Upper Nile. That is where the affix "itti" is still found in names.

French Egyptologist Marc Gabolde offered a different interpretation of the DNA evidence. Speaking at Harvard’s Science Center, Gabolde said he’s convinced that Tut’s mother was not his father’s sister, but rather his father’s first cousin, Nefertiti.

Nefertiti was already known to be Akhenaten’s wife and in fact the two had six daughters. Gabolde believes they also had a son, Tutankhamun, and that the apparent genetic closeness revealed in the DNA tests was not a result of a single brother-to-sister mating, but rather due to three successive generations of marriage between first cousins.


Gabolde is right. This is demonstrated through DNA studies and analysis of the Genesis King Lists which identifies the marriage and ascendancy pattern of the Kushite rulers who united Egypt and established the earliest dynasties. Likely Tut's father had two wives. One was a half-sister and the other was a cousin. Tut was the son of the cousin wife. Usually this son served as a prime minister in the territory of his maternal grandfather.

The significance of my research is that I have identified the marriage and ascendancy pattern of Abraham's Horite caste and have demonstrated that this marriage structure drove Kushite expansion and the diffusion of the proto-Gospel. Using the tools of kinship analysis, I have traced the Horite ancestry of Jesus Christ from his earliest named ancestors in Genesis 4 and 5.


Related reading: Identifying King Tut's Father; King Tut and the Dispersion of R1b; A Visit to King Tut's Seattle Exhibit; Solar Imagery of the Proto-Gospel; Why Eliezar Was Abraham's Heir