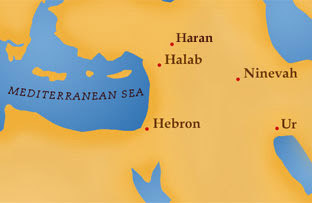 Abraham is a pivotal figure of the Old Testament and a model of obedient faith and justification in the New Testament. He was a member of a very ancient caste or ruler-priests who were divided into two ritual groups (moiety): the Horite Hebrew and the Sethite Hebrew. Though we first meet Abraham in Mesopotamia, his ancestors lived along the Nile and served at royal shrines and temples (Horite Mounds).
When Abraham's father Terah died in Haran, Abraham's older brother Nahor ruled over Terah's property. Abraham became a sent-away son to whom God promised a territory of his own. Abraham and his half-sister wife Sarah headed south and Sarah settled in Hebron. Latter, Abraham took a second wife Keturah who resided in Beersheba. His two wives lived in separate settlements that marked the northern and southern boundaries of Abraham's territory. That territory was entirely in ancient Edom, called "Idumea" by the Greeks, meaning "Land of Red People." 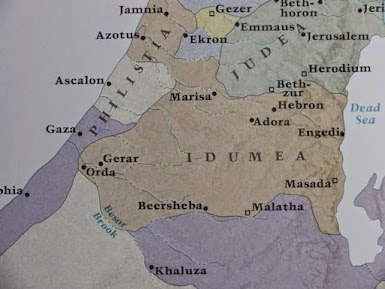 The Horite Hebrew ruler-priests had a distinctive marriage and ascendancy pattern which has been determined through analysis of the kinship data of Genesis 4, 5, 10, 11, 25 and 36. Abraham's marriages to Sarah and Keturah align exactly with that pattern. Sarah was his first wife and a half-sister. Abraham and Sarah ad the same father but different mothers because the Horite ruler-priests typically had two wives. The first-born son of the first wife was the ruler's heir. As Sarah was barren, Abraham had no proper heir.
However, according to Horite/Hurrian family law Abraham had the recourse of appointing a son born to one of his concubines. Another recourse was for Sarah's handmaid Hagar to give birth to a son on Sarah's lap. That is the action taken by Sarah that produced Ishmael as a potential heir.
Abraham complained to the Lord that he didn't have a proper heir. This is a concern of any ruler lacking an heir so that there many be an orderly succession. Abraham was a man of high social status. The Hittite living around him regarded him as a "great prince" among them (Gen. 23:6).

In his commentary on Genesis 15:2-6, Matthew Henry writes, "Though we must never complain of God, yet we have leave to complain to him; and to state all our grievances. It is ease to a burdened spirit, to open its case to a faithful and compassionate friend. Abram's complaint is, that he had no child; that he was never likely to have any; that the want of a son was so great a trouble to him, that it took away all his comfort." (From here.)

Matthew Henry is quite mistaken in some details. The Scriptures tell us that Abraham had eight other sons, many of these were born before Isaac. One of them was Eliezer, who would have served as an heir, though not the proper heir. Henry is correct that this was grievous to Abraham. Abraham regarded himself as cursed.

"O Lord God, what can you give me seeing that I shall die accursed, and the steward of my household is Dam-Masek Eliezer?" (Septuagint, Genesis 15:2)

In providing a son, according to the divine promise, God overthrew the curse. Behold the Messianic pattern!


What constituted a proper heir for Abraham?

Analysis of the marriage and ascendancy structure of Abraham's Horite Hebrew people reveals that the rulers had two wives. The first was a half-sister, as was Sarah to Abraham. The second wife was usually a patrilineal cousin, as was Keturah to Abraham. The wives maintained separate households in settlements on a north-south axis. Sarah resided in Hebron to the north, and Keturah resided in Beersheba to the south. These settlements marked the northern and southern boundaries of Abraham's territory.


Before Isaac was conceived, Abraham had taken a second wife, Keturah. Her firstborn son was Joktan (Yaqtan). He was never a potential heir for Abraham, however. The firstborn son of the cousin bride was named after his maternal grandfather as he would serve as a high official in that grandfather's territory.

Dam Mesek"son of Mesek" is the same in Hausa language . example:Dam Mantu is "son of Mantu"

Yes, there are many correlations between Hebrew, Arabic and Hausa. Abraham's ancestors came out of Africa.