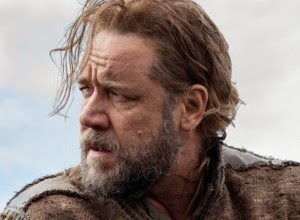 Paramount's big-budget film about Noah and the flood came out this week. Go see Darren Aronofsky’s film, featuring Russell Crowe as Noah and Anthony Hopkins as Methuselah. It is a white-knuckle thriller!

Keep in mind that Hollywood's objective is to entertain, not inform, so we can't hold it against Paramount or Aronofsky that the details are all wrong.


The evidence of Scripture, linguistics, climate studies, and DNA studies support the historicity of Noah and a time of flooding, but not in the Black Sea. Noah kept a royal menagerie and had many boats. These had wood frames and were made of reeds (called gofer in Scripture). He lived in the region of Lake Chad; the only place on Earth that claims to be Noah's homeland - Borno - "Land of Noah." Imagine how this movie would be received were Noah portrayed as a Nilo-Saharan!

In Noah's time, the larger lakes of his region reached levels sometimes 330 feet higher than their present levels. Around these bodies of water were spongy marshlands which provided channels for navigation for smaller boats. One such boat, the Dufuna dugout, was made of black mahogany. It was discovered in 1987 in the region of Borno at a depth of 16 feet under clays and sands whose alternating sequence indicated deposition in standing and flowing water. The dugout is 8000 years old.

Here is a diagram of Noah's descendants to the pivotal figure of Abraham. Biblical Archaeology Review discusses the historicity of the event. In this article Ronald S. Hendel insists that people are looking in the wrong place for Noah's flood. He believes it took place in Mesopotamia, another region prone to flooding. He assumes that E.A. Speiser is correct in his assertion that the story of Atrahasis, the Mesopotamian Noah, forms the basis of the Biblical accounts. However, this 1700 B.C. account comes well after the time of Noah.

I argue here that it Noah's flood place in the region of Lake Chad, a region of lakes, basins and troughs that interconnected in the Mid-Holocene. The entire region was prone to flooding from monsoons off the Indian Ocean. The Gurian Wet Period lasted here for 500 years!

Saharan petroglyphs dating to between 4300 and 2900 BC show boats and cattle. These have been found in the Eastern Central Desert of Egypt and Sudan. Examples of these images are shown below. 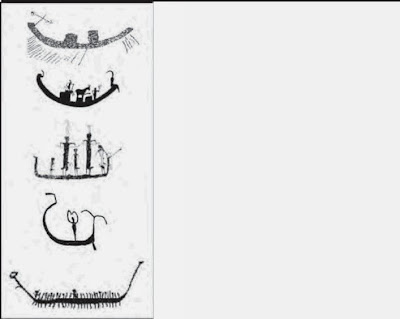 Related reading: Noah's Flood: Where and When?; Atrahasis and Noah: Similarities and Differences; The Nile Was 17374.6 Square Miles; When the Sahara Was Wet; Boats and Cows of the Nilo-Saharans; Nilo-Saharan and Saharo-Nubian Populations; Genesis and Climate Change; Climate Cycles Indicate a Dynamic Earth; Newly Discovered Pyramid Predates Noah; Was Earth Repopulated After Noah's Flood?

Thank you for the information Alice. Very informative.

I'll stick with my research findings, Black Sea region...
but Noah/Atrahasis/Utnapishtim+ may well have been a Kushite/"Ethiopian" of the southern Black Sea coast.

Interesting that sealskins adorned the tabernacle, they still live in the Black Sea.

Did Lake Mega-Chad have readily found pitch deposits? I don't see any indications so far.

[The oldest copper dagger in Canaan came from Caucasus (Black Sea), long before local ones were made.]

"Until the Ras al-Jins (Southeast Oman) discoveries, we had no direct information on reed boat structure; iconographical representations and boat models proved unhelpful. However, the reconstruction of a 42.6-foot (13 m) proto-reedcraft based on the Ras al-Jins bitumen impressions, provided valuable information into construction methodologies: there were about 300 fragments of bitumen imprinted with reed, rope and mat impressions on one side and barnacles (Balanus amphitrite) on the other, dating from between 2300 and 2100 BCE."

I would tend to concur with you on your conclusions. Doing a google search on "saharan desert erosion" revealed the evidences of severe water erosion. There are archeological discoveries of whale bones and other sea life scattered through out. This is depicted in Tasilli Cave art. Nasa satellite imagery show the Chad basin and the whole Sahara region as a vast water way, much of which is now underground in great sea like reservoirs. Also research has shown that the largest and greatest erosion of diatomaceous on earth in the Bodélé Depression in the Sahara) is one of the most important sources of climate-affecting dust in the atmosphere.

Prof. Decker says the genetics of these African cattle breeds are similar to those of cattle first domesticated in the Middle East nearly 10,000 years ago, proving that those cattle were brought to Africa as farmers migrated south
-
I tie these names together: zebu(brahman cattle) herders Jebus/Ijebu/Egypt/Igbo/Ibo/Himba, and the Tana River Dahalo elephant hunters, (because Dahalo in Madagascar is a zebu rustler) with buffalo related via beef/Bos/buffalo/bungalo(hut with cow manure floor)

Dear Alice, I have found your research very helpful, will you help me understand something? I feel that the whites(Caucasian) race originated with the fallen angels;Enoch 105:3 and continued with Japheth due to Noah being albino. Then Esau being red and YAH stating two nations in the womb. Can you clarify this with concrete proof? I am so confused.

The point of origin of all humans is Africa millions of years ago. From the beginning humans have exhibited great diversity of physical appearance. Even siblings can look very different due to genetic inheritance.

Traits associated with white people have been found at Nekhen on the Nile. This is the oldest known site of Horite Hebrew worship, dating to about 3800 BC. One of the more intriguing discoveries at the ancient shrine city of Nekhen was the recovery of an almost complete beard in association with the redheaded man in Burial no. 79. The Nekhen News (p. 7) reports, "The vast majority of hair samples discovered at Nekhen were cynotrichous (Caucasian) in type as opposed to heliotrichous (Negroid)."

Enoch is a royal name that appears rather often among the Horite Hebrew rulers listed in Genesis 4 and 5.

The notion of fallen angels having sex with human woman is an interpretation that doesn't have support in the book of Genesis. The nephilim are the "powerful ones of old" in Genesis 6:1-4. The word npyl (nephil) in Aramaic means giant or great in stature or social rank. It is equivalent to nfy in Arabic, meaning hunter. It is said concerning Nimrod that he was a mighty hunter or a mighty man before the Lord (Gen. 10:9).