Each week I receive messages asking questions about people and events in Genesis and Exodus. Here are answers to some commonly asked questions.

Was Abraham the first Jew?
No. Abraham was not a Jew and he did not speak Hebrew. Even rabbis admit that this is part of the Jewish narrative which is more myth than fact. Dr. Shaye Cohen (Harvard) explained how this is so in a 2008 NOVA interview:

The biblical narrative gets going with Abraham in Genesis chapter 12. Abraham in turn Isaac, in turn Jacob, in turn Joseph and the twelve tribes, this brings us directly to the people of Israel and the covenant at Sinai. So Abraham is thought of as the first Jew, the archetype. Historically speaking, of course, this doesn't make much sense. It's hard to talk about Jews living around the year 1800 B.C.E. or anytime near that. We don't have any of the institutions, beliefs, social structures in place that will later characterize Jews and Jewishness. So in a mythic kind of way we can say that Abraham recognizes God and that Abraham launches the process—biological and social and cultural—that will culminate in the people of Israel, who in turn will become Jews and the purveyors of Judaism. But to call Abraham Jewish simplifies things very dramatically.


This is a case where over-simplification approaches obfuscation.

Abraham was a Horite ruler in Edom. Were we able to test his DNA we would find that he is in haplogroup R1 (Y-DNA) which has a wide range of physical features. The dispersion of the R1b group is shown on the map (right). Note the bright red around Lake Chad, Noah's homeland, and the Upper Nile Valley. The R1b is also prevalent in the British Isles where Kushan peoples settled and where Horite mining experts took up residence.

The Genesis narrative suggests that Abraham had a distinctive red skin tone that is associated with other famous Edomites, like Esau. The Edomites may have been kin to the red Nubians. The Shasu of Nubia also lived in Edom.

What nationality was Abraham?
At the time that Abraham lived there were no nations in the modern sense. There were peoples, clans, and castes. Ethnic identities aligned with the territorial chief.

Abraham's ethnicity was Kushite and his father was a ruler-priest descendant of Nimrod, a son of Kush. Nimrod was a sent-away son who became a mighty ruler in the Tigris-Euphrates Valley. This is why we first meet Abraham in Ur, though his ancestors were cattle-herding Nilo-Saharans.

Abraham was another sent-away son whose territory extended on a north-south axis between his two wives Sarah and Keturah. Sarah resided in Hebron and Keturah lived in Beersheba. Abraham also dug wells in Gerar to the west and had a treaty with the ruler of that region. Likely he also had water rights at Engedi to the east. This means that Abraham's territory was entirely in the region know as ancient Edom. The Greeks called this region Idumea, meaning "land of red people." 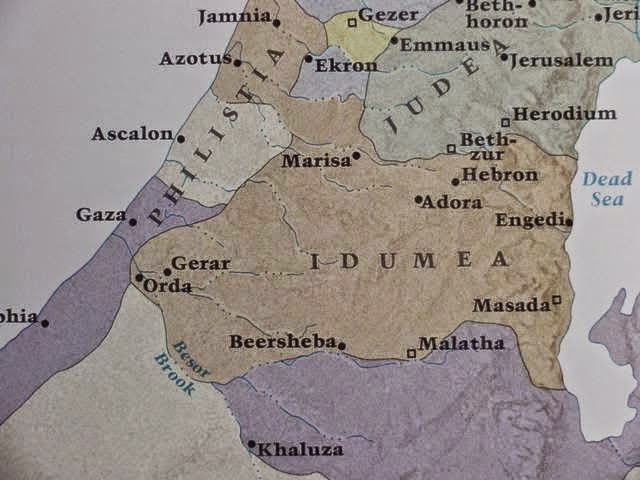 Edom is named in the Bible as one of the ancient seats of wisdom. The wisdom of the Horites extended to medicine, astronomy, writing, commerce, navigation, natural sciences, and architecture. The 400-acre Edomite complex at Petra reflects Horite beliefs. This was the home of the red Nabateans. Naba or Nabu was the guardian of scribes and prophets. The cult of Nabu was introduced into Mesopotamia and Babylon by the Kushites. Kushite kings sometimes bore the name Nabu, as with Nabu-shum-libur, an early Kushite king in Babylon and Nabu-aplu-iddina. This is the origin of the Hebrew word nabi, meaning prophet.


What language did Abraham speak?
Abraham and his advisers would have communicated using the languages of the peoples with whom they had contact. This included Egyptians, Nubians, Arameans, and peoples of Arabia. During Abraham's time many different alphabets and scripts were used.

The Egyptian hieroglyphs were priestly writings, and the symbolism of each glyph or pictograph pertains to the ancient Egyptian cosmology which changed over time. The oldest of these will be found in the Upper Nile and at the oldest Horite shrine in Nekhen. To understand the Sumerian pictographs we have to look at the earlier roots common to both the Nilotic and Sumerian peoples. Here we will find some very ancient lexemes: V, T, X and the solar symbols O and Y. Many of these appear in the old Dedanite scripts and in the Oasis North Arabian alphabets like Thamudic, Dumaitic, and Taymanitic. The urheimat of the Canaanite Y is the Nilo-Saharan cattle herding and boating populations. They are among Abraham's ancestors, and Messianic expectation appears to have originated among them. 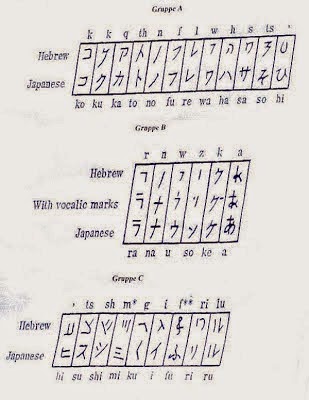 Orly Goldwasser, professor of Egyptology at the Hebrew University of Jerusalem, argues that the first alphabet, from which all other alphabets developed, was invented by Canaanite miners in the turquoise mines of Serabit el-Khadem in the Sinai peninsula. The pictorial hieroglyphs of the Nile Valley served as the inspiration for this alphabet.
Other ancient writing forms used by merchants for keeping accounts are found along ancient trade routes; the spice routes, the silk routes, the King's Highway from Egypt through Palestine, the ancient tin route from Spain to Ireland, etc. These involve fewer pictographs and more hatch marks that suggest counting or record keeping. Ogham bears resemblance to these earlier commercial scripts. Some of the elements of the commercial scripts are found in Hebrew and in Ainu, scripts that are clearly related (see image at right).

A comparison of the Ainu (Kata) and Hebrew scripts reveals a connection that is explained by the fact that the earliest scripts were those used by priests in the service of rulers in many regions, and these priest-scribes kept royal accounts. These ancient rulers are the "mighty men of old" mentioned in Genesis. Among them were the "red" rulers associated with Abraham and the Edomites.


Was Noah's flood worldwide?
No. It was an extensive regional flood during the African Humid Period. At one time major water systems connected the Nile and central Africa. The highest concentration of R1b in Africa is in the Lake Chad region, Noah's homeland.

Noah lived approximately 2490-2415 BC. This is the period of the Old Kingdom, a time of great cultural and technological achievement in Egypt. This places Noah and his sons in relatively recent history. They ruled over territories during the time of the 7th, 8th and 9th Dynasties in Egypt.

Humans were dispersed globally by 20,000 years ago and during Noah's time these populations were not destroyed. Consider the following population estimates by urban center between 2500 and 2200 BC:


There is no evidence that any of these peoples were wiped out by a catastrophic global flood and that the earth was repopulated by Noah's descendants. However, there is evidence of a Kushite expansion out of Africa.


Were Adam and Eve real?
In Genesis Adam and Eve are meta-historical figures who represent the first parents of the ruler-priest lines from which Abraham, Moses, David and Jesus came. Adam was probably a red man. Later Biblical writers treat them as the first created humans. Were this the case, Adam and Eve would have lived about 4 million years ago.

It is doubtful that Adam and Eve lived 4 million years ago. That is not how they are presented in Genesis, although they are interpreted as the first of the human race in other places in the Bible. The Biblical writers recognized that the people among them with a red skin tone were of an extremely ancient ancestral line. These were the "mighty men of old." Some were rulers in Edom. These are listed in Genesis 36. Esau the Elder and Esau the Younger were among them. Esau is specifically described as being red in Genesis 26. David is related to the Horite rulers of Edom and he is described in the Bible as red/ruddy. Samuel, the son of a Horite priest from Ramah, anointed him ruler.


How many wives did Moses have?
As with all Horite rulers, Moses had two wives. His first wife was Kushite and a half-sister. She and Moses had the same father, but different mothers. His second wife was the daughter of a ruler-priest of Midian. Her name was Zipporah and she was Moses's patrilineal cousin. 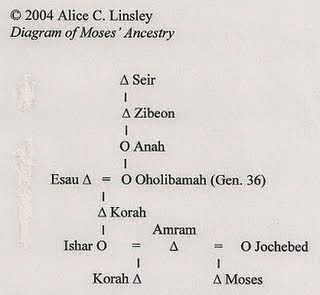 Moses was a descendant of Seir the Horite (Gen. 36). As can be seen in the diagram above, Moses's father also had two wives. His first wife was his half-sister Jochebed and his second wife was his patrineal cousin Ishar. Ishar was the mother of Moses's half-brother Korah the Younger. She named her first born son after her father, according to the cousin bride's naming prerogative. Korah opposed Moses in the wilderness. "Korah" relates to the practice of shaving the head and body in preparation for the priest's term of service in the temple. (Biblical Archaeology Review, July/August 2007, p.37)


Related reading: What Color Was Abraham?; Noah's Flood: Where and When?; Moses's Wives and Brothers; Red and Black Smiths; Sent-Away Sons; When is the Evidence Sufficient?; How the Deuteronomist Changes the Genesis Narrative; Solving the Ainu Mystery; Were the Shasu Related to Moses?; Two Named Esau; Questions High Schoolers Ask About Genesis; Answers to More Questions