Longevity of the Genesis Kings 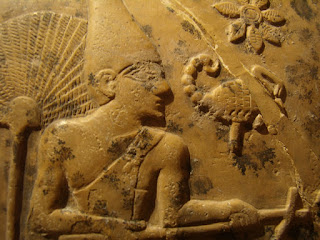 Image of Scorpion King II from the Scorpion Macehead. He reigned in 3100 BC.

Genesis chapters 4 and 5 list ancestors of the early Hebrew ruler-priests. These were powerful men who built kingdoms and expanded their territories. As with the kings named in the Sumerian King Lists, theses rulers are assigned unusually long lifespans. The fact that the Genesis King Lists reflect a practice of antiquity means we are dealing with authentic material.

Their long lifespans are not to be taken literally. It was a practice in antiquity to assign long years to rulers. The reign of the Persian king Zahhak was said to be 1000 years. The Sumerian king lists assign reigns of thousands of years. Longevity claims for eight Sumerian kings alone totaled 241,200 years. The mythical length of years for these rulers cannot be correlated with dynasties from contemporary Mesopotamian records.
The only "old" dude mentioned in Genesis is Abraham, as St. Jerome, notes: "I am reviewing carefully the places in Scripture where I might find old age mentioned for the first time. Adam lived for 930 years, yet he is not called an old man. Methuselah's life was 969 years, and he is not called an old man. I am coming down all the way to the flood, and after the flood for almost three thousand years, and I find no one who has been called old. Abraham is the first, and certainly he was much younger than Methuselah." (Homilies on the Psalms 21)

Jerome's observation is significant. Abraham was old. Those who lived before the flood are not called old because the numbers assigned to them are symbolic.

Invariably, people ask: “What is the significance of the long lifespans listed in Genesis?” and “Why did those who lived before the flood live longer than those after the flood?”
Many seem unaware the different versions of the Bible give different numbers. There is the discrepancy between the Septuagint, the Masoretic, and the Samaritan texts. The total number of years in the Septuagint and the Masoretic (Hebrew) records agree except in the case of Lamech the Younger (Noah's father). The Septuagint assigns Lamech a total of 753 years, whereas the Samaritan Pentateuch assigns him only 653 years. The Masoretic Pentateuch assigns Lamech the Younger 777 years.
In his Commentary on Genesis (Volume 1), Umberto Cassuto wrote, "What is the cause of the divergences between the three texts, and which recension has preserved the original figures? Much has been written on this subject, and the answer remains in dispute" (p. 265). Cassuto himself believed that the original figures are preserved in the Masoretic chronology. Those are the numbers I use here.

Consider the lifespan assigned to each of these pre-flood patriarchs in Genesis 5:

Now compare the lifespan of each of the following in Genesis 11:

In the Hebrew Gematria, there is no notation for zero. This poses a challenge when attempting to understand the symbolism of years that include a zero, such as Kenan's 910 and Seth's 600 years. It is possible that the zero was a solar symbol indicating the completion of an 11-year solar cycle.

Typically, solar cycles have a duration of about 11 years. But how are we to interpret 910 or 600? In Kenan's case we have only one solar symbol. Does this mean he lived for 91 years? Or does this mean 91 years plus eleven = 102 years?  In Seth's case, we have two cycles of eleven plus 6. Perhaps, Seth lived only 28 years.

Clearly, there is much we do not understand about the numbers assigned to these early rulers, and until we have a better understanding, it is best not to insist that these numbers represent literal spans of time.