An Anthropologist Looks at Genesis 5 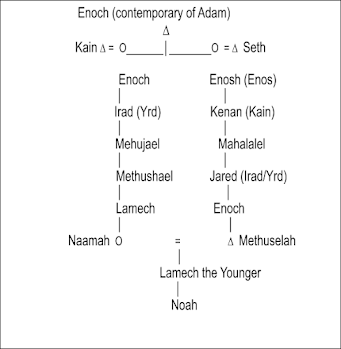 To understand the marriage and ascendancy pattern of the early Hebrew we must read the king lists of Genesis chapters 4 and 5 side-by-side. An analysis of the kinship data reveals that the ruler-priest lines of Cain and Seth intermarried (endogamy).
The left side of the diagram above is based on the data in Genesis 4. The right side is based on the data in Genesis 5 where we are told that Methuselah’s son was named Lamech. Lamech the Younger is named for his maternal grandfather, Lamech the Elder. Clearly, the lines of Cain and Seth intermarried. (This is shown in greater detail in "An Anthropologist Looks at Genesis 4.")

Seth's descendants are associated with the Nile Valley. The earliest representation of Seth is found on a carved ivory comb from Naqada I (c.4500-3500 BC), and he also appears on the Scorpion mace head. As with Osiris, Seth was a human whose followers elevated him to a deity (deification). Seth is associated with an ancient settlement in Upper Nile Valley, the town of Nubt near modern Tukh.

Legend holds that the historical Seth was red-haired and that his descendants with red hair identified with him. At Nekhen, the oldest known site of Horite Hebrew worship (c.4500 BC), a redheaded man was found in Burial no. 79. He had long wavy natural red hair and a full beard. Seti I who reigned from 1294–1279 BC also had red hair. I Chronicles 1:50 mentions Matred, the Egyptian bride of an Edomite ruler. Her name is related to Menmaatre, the throne name of Seti I.

The historical Adam is named for the ground – adamah – from which he was formed. It is likely that this refers to red soil. The Genesis 5:3 description of Seth being in the likeness and image of Adam suggests that Seth was red also. Whether is indicates a red skin tone typical of some Nubians, or red hair, or both, is uncertain. The trait of redness is found among the descendants of Seth and Cain, specifically Esau (Gen. 25:25) and David (1 Sam. 16:12).

Ta-Seti means the "Land of Seth” and the Sethite warriors were acclaimed as highly skilled archers. Sethite priests served at shrines and temples along the Upper Nile. In the Ancient Pyramid Texts these are described as Sethite “Mounds” and the Sethite and Horite mounds were under the authority of the same high king and served the same high God whose son was called Horus. The Sethite and Horite Hebrew represent a moiety system. They were one people divided into two ritual groups. They maintained separate shrines and temple complexes along the Nile. 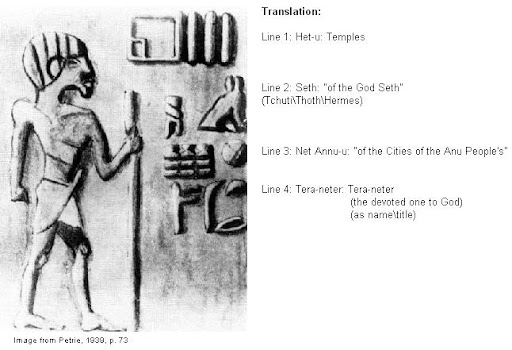 This tile found by Flinders Petrie shows a Sethite priest of a temple of the Anu people. Tera-neter refers to a priest. Abraham’s father was Terah, a Hebrew priest. Note that the priest holds a staff as a sign of his authority.

Many early figures of the Bible come to life when we understand their social structure. The cousin bride’s naming prerogative first found among the early Hebrew rulers Cain and Seth is also found among later biblical persons. The distinctive features of the marriage and ascendancy pattern of the Hebrew ruler-priests such as two wives and the cousin bride’s naming prerogative are found among their descendants: Terah, Abraham, Esau, Jacob, Amram, Moses, Elkanah, David, Ashur, and Joash.