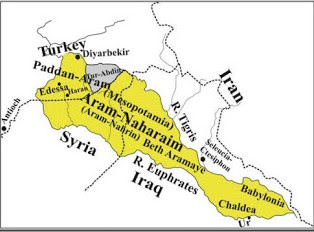 The Hebrew (Akkadian Abru) priests of the ancient world were found among numerous biblical populations, especially the Judahites, the Arameans, the Edomites, and the Moabites. According to the biblical data, these populations were related by blood (consanguine) and marriage (affinty).

The Hebrew priests of Judah were related to the priests of Aram, Edom and Moab. All these priests share a common male ancestor in Terah. The Moabites are descended from Terah through his deceased son Haran and his grandson Lot.

The Arameans are difficult to define ethnically because of their diversity and wide geographic dispersion. They populated a region extending from the Iranian steppes east of Damascus to the rich agriculture zones of southern Mesopotamia. Their language, West Semitic Aramaic, became the lingua franca of the ancient Near East until the arrival of Greek. Palmyrene Aramaic inscriptions have been found on Hadrian's Wall in England. Palmyrene is a West Aramaic dialect, along with Nabataean and Judeo-Aramaic.

Terah's oldest son was Nahor. His Akkadian name means "Devoted to HR, the Most High God," and he was Terah's proper heir. After Terah died, Nahor ruled over Terah's holding in Aram. Abraham became a sent-away son and, by God's direction, came to Canaan from Aram.

Jacob was also Aramean by virtue of his mother, Rebecca, who Abraham’s personal servant fetched from Aram to marry Isaac (Genesis 24). As a sent-away son, Jacob lived in Aram for 20 years while working for Laban. There he married two wives and gradually gained wealth before being reconciled to his brother Esau. Because of his unsettled state, Jacob is sometimes referred to as a "Wandering Aramean."

When Jacob left to stay with relatives in Aram, he fled from his brother Esau, Isaac's proper heir and the man who ruled in Edom after Isaac death. Hebrew priests practiced endogamy, that is, they married only within the Hebrew clans wherever they might be dispersed. The marriage between Isaac of Edom and Rebecca of Aram shows that the priests of both regions were kinsmen. Jacob's marriage to two Aramean women fits the pattern.

This is the back story for Naomi and Ruth, the wives of Hebrew priests who were living in Moab.

Some Hebrew priests of Bethlehem resided in Moab. When Ruth returned to Bethlehem with her mother-in-law Naomi, she became the wife of Boaz, a ruler of Bethlehem. Boaz fathered Obed, but by levirate marriage law, Obed was the heir of Ruth's late husband whose holding was probably in Moab, not Bethlehem. This means that David's family had kin in Moab which explains why David sent his parents to the citadel of the king of Moab for protection while he was being pursued by Saul (1 Samuel 22:3).

The book of Ruth presents anthropologically significant data about the House of David's link to Bethlehem. Bethlehem was a Horite Hebrew settlement according to I Chronicles 2:54 and I Chronicles 4:4. The priests who resided there believed in God Father and God Son to whom they made grain and oil offerings and offered blood sacrifice. This is verified by 2 Samuel 8:18 which states that David’s sons were priests.

After David became king, he brought the Ark "from the house of Abinadab, that was in Gibeah” (Saul's hometown) to Jerusalem (II Sam. 6:1-12). However, for three months the Ark rested in David’s hometown of Bethlehem in the house of Obed-Edom. This indicates the great antiquity of David's royal lineage. Genesis 36:31 states that there were kings in Edom long before there was a king in Israel. In fact, Abraham's territory was entirely in the region of ancient Edom, and Edom is where Aaron was buried.

HR means "Most High One" in ancient Egyptian. That was the title and address for the Son of God. In a priestly prayer on behalf of the king found in the Pyramid Texts (2000 BC), we find this: "Horus is a soul and he recognizes his Father in you..." (Utterance 423)

Pathros should be studied as a gateway to understanding the Afro Asiactic Hebrew Diaspora to west coast Africa. Also the North Africans who attended the council of Niece held kemitic, Hermeistic Horite Priest knowledge. Kept it secret among themselves so they could effect cannon inspite of euro arynisn ignorance and lack of comprehension.

Pathros refers to Upper Egypt, from Elephantine fort to modern Asyut north of Thebes. Gardiner argues it extended to the north no farther than Abydos. It is mentioned in the Hebrew Bible in Jeremiah 44:1 and 15; Isaiah 11:11; and Ezekiel 29:14, 30:14.

Ancient Nubians held to the Horite belief in God Father and God Son. The oldest known site of Horite Hebrew worship, however, is at Nekhen (4000 BC).