The Afro-Asiatic Conception of Purity 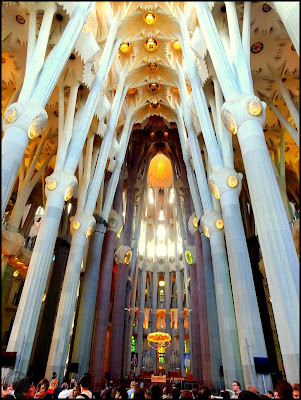 How are we to explain the prevalence of blood sacrifice performed by a priest caste and a concern for ritual purity among peoples as geographically separated as the ancient Egyptians, the Sarki of Nepal, and some Native Americans? How do we explain similar conceptions of the sun as a purifying agent, and linguistic points of contact among widely dispersed peoples?

We might point to the common point of origin of all humans in Africa and to the development of languages from the Afro-Asiatic root stock. A comparison of the lexicons of Afro-Arabian and Semitic languages with Sanskrit and Dravidian suggests that a vast Afro-Asiatic Dominion stretched from the Wet Sahara to Asia between 12,000 and 10,000 years ago. One explanation is a common trade language.

An example of how languages are influenced by trade is the early traffic in rice from the NIle Valley to Madagascar and beyond. The language of Madagascar is Sulawe. It is related to ancient Egyptian, Dravidian, and East African words for rice.


The term "Sulawesi" appears to be related to the words write or rice records. Merchants who were moving from island to island recorded their transactions. Sulawe resembles the Egyptian word for writing ssw; and the Mande sewe; and the Dravidian ha-verasu. These terms referr to written records of rice sales or commercial records.

Rice grain formed the basis of weight measurement from East Africa to Sulawesi. On Madagascar, the weight of one grain of rice is called vary, and corresponds to the Swahili wari and to the Dravidian verasu. The Tamil word for rice is arisi, and the Old Persian word is virinzi which closely resembles vrini, the Sanskrit word for rice.

Linguistic connections are evident also in the term for the slash and burn agriculture used in Sulawesi and East Africa.The word trematrema is used in Northeast Betsimisaraa (Madagascar) to refer to a one to three year old slashed-and-burnt field. It is related to the Swahili word tema, ‘to cut’, and the redoubled form tematema, ‘to slash, to chop'.

Another explanation for common conceptions and roots is the blood-related Afro-Asiatic kingdom builders. They established their territories near major water systems which they used to transport cargo and to collect tariffs on cargo moved through their territories. Their influence can be traced using comparative linguistics and kinship analysis.

In this post we will look at the evidence of common conceptions of purity among the dispersed Afro-Asiatics.

Afro-Asiatic languages include Akkadian, Amharic, ancient Egyptian, Arabic, Aramaic, Assyrian, Babylonian, Berber, Chadic, Cushitic, Ethiopic, Hahm, Hausa, Hebrew, Omotic, Phoenician, and Ugaritic. These languages appear to share a large  number of common roots. Because this is so, linguists are able to compare the languages and draw conclusions about the older “proto” Afro-Asiatic language and dialects spoken before 10,000 years ago.

The terms for ritual purity in Akkadian, Biblical Hebrew, Hittite, Sumerian, and Ugaritic are related to the idea of radiance. (See The Semantics of Purity in the Ancient Near East, p. 5.) The ancient Nilotes also associated purity with the radiance of the sun, the emblem of the Re (which means Father) and his son Horus.

The temple purification rituals of the ancient Near East resemble the Pharaoh's daily ceremonial toilet in preparation for morning prayer. The ruler's lustration came from exposure to the Sun, the emblem of the Most High God and his son.

Likewise, the ancient Egyptian priest was to be purified before entering the temple.

Herodotus observed that "The Egyptians were the first who made it a point of religion not to lie with women in temples, nor to enter into temples after going away from women without first bathing." (II:64)
The priests of ancient Egypt maintained shrines and temples along the Nile and regarded ritual purity as essential to their ministry. Herodotus observed II:37:

Egyptian priests shaved their bodies and heads before their terms of service in the temples. Korah, Moses' half-brother, was a Horite Hebrew priest. Korah means "shaved head" and according to Numbers 16:17-18, he carried the censor to offer incense to the High God.This suggests that kor and tor may be cognates. There is a suggestion of a very early connection between blood, purity, and holiness.

The Hebrew thr = to be pure, corresponds to the Ancient Egyptian tr = pure, and to the Hausa/Hahm toro = clean, and to the Tamil tiru = holy. All appear to be related to the Proto-Dravidian tor = blood. Among these peoples blood was perceived to have power both to pollute and to purify; to condemn and to justify.


Related reading: Purity Seal From Herod's Temple; 2,400 BC Tomb of a Purification Priest; The Origins of Animal Sacrifice; The Red Heifer; The Priesthood is About the Blood; Blood and Water; The Sun and the Moon in Genesis; Avraham Faust, "Purity and Impurity in Iron Age Israel, Biblical Archaeology Review" (2019)