The Horite Descendants of Cain

Alice C. Linsley ©1981
The Royal Descendants of Adam and Enoch

The diagram shows that the clans of Cain and Seth intermarried. Genesis 4:22 identifies Tzillah as the mother of Tubal-Cain, "an instructor of every artificer in copper and iron" and his sister was Naamah, Methusaleh's cousin wife. The descendants of Cain, Tubal-Cain, and others of this clan are associated with the Kenite metal workers.

The metalworking descendants of Cain shared common ancestry with the descendants of Seth (Sethites), and preserved recognition of their close blood bond. Judges 1:16 identifies Jethro as a Kenite. His daughter Zipporah was Moses's cousin wife. King Saul sought to protect the Kenites by warning them to move away from the city that his army was about to attack (1 Samuel 15:6).

Though the clans of Cain and Seth intermarried and recognized their blood bond and responsibility for mutual defense, they clearly maintained distinct identities. Extra-biblical sources indicate that they also maintained separate shrines and temples, though they worshiped the same God. They were to be governed and judged by the same king. "O King, you have not departed dead, you have departed alive...The Mounds of Horus serve you, the Mounds of Seth serve you." (Utterance 213 of the Ancient Pyramid Texts) 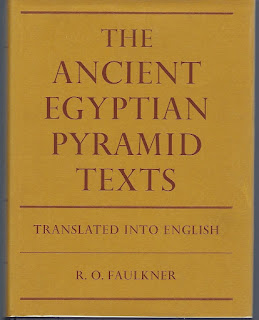 In the Ancient Pyramid Texts (dating to 2400-2000 BC) the Sethites and the Horites form a moiety. The term "moiety" refers to two social or ritual groups into which a people is divided. The distinction between the two groups is evident in PT Utterance 424: "O King, a boon which the King grants, that you occupy the Mounds of Horus, that you travel about the Mounds of Seth..."

PT Utterance 470 contrasts the Horite mounds with the mounds of Seth, designating the Horite Mounds "the High Mounds." Here we find a suggestion that the Horite Hebrew were named for their devotion to Horus (HR). In the Ancient Egyptian language HR means the Most High One.

Utterance 424 continues, "that you [King] sit on your iron throne and judge their affairs at the head of the Great Ennead which is in On." On is mentioned in Genesis 41:45. Joseph married Asenath, a daughter of the High Priest of On.

The extent of the King's authority is considerable, and without limits were he to rise from the dead. In his resurrection body he is to "traverse the Mound of Horus of the Southerners" and "traverse the Mound of Horus of the Northerners." (PT Utterances 536 and 553) The risen king is expected to restore his settlements and cities, and open doors to the Westerners, Easterners, Northerners and Southerners (Pt Utterance 587). He is to "betake himself to the Mansion of the Most High (HR) which is in the firmament" (PT Utterance 539).

The risen king unites the peoples, restores the former state of blessedness, and unites heaven and earth. When seen from this perspective, the Horite religion appears to be the foundation of the Messianic hope that is fulfilled in Jesus of Nazareth.

In this 1924 paper published by Hebrew Union College, Dr. E. Taubler noted that ancient Egyptian inscriptions make it clear that the Horites were scattered over the whole land of Canaan (p. 7).

Josephus reported that the Horites were descendants of Abraham and his cousin wife, Keturah, and, quoting an ancient historian, he portrays them as "conquerors of Egypt and founders of the Assyrian Empire." Keturah was from the region of Beersheba.

Genesis 36 identifies Edom (Idumea) as another territory under Horite rule. Abraham's territory was entirely in the region of ancient Edom.


Related reading: The Horite Mounds, The High Places; Who Were the Horite Hebrew?; Rulers From Cain to Jesus; Horite Hebrew Priests in Aram, Edom, Judah, and Moab; The Horite Chiefs of Edom