Rulers From Cain to Jesus

Proto-Saharan and Kushite rulers controlled a vast Afro-Asiatic Dominion from Africa to the Indus River Valley. Nimrod was a Kushite ruler (Gen.10) who left the Nile Valley and established his territory in the Tigris-Euphrates region. The movement of the Nilotic peoples out of Africa has been verified by DNA studies, linguistic studies and migration studies. 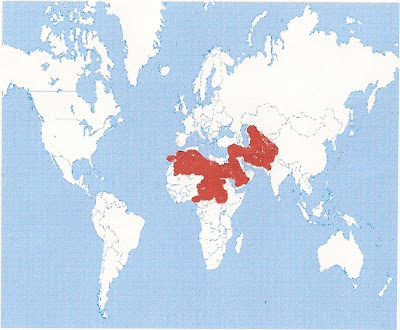 This map from Clyde A. Winters' Study of Haplogroup R-M173 shows the spread of the Proto-Saharan peoples and the Kushite rulers. The marriage and ascendancy pattern of the Kushite kings helped to drive the out of Africa. According to that pattern, at least one royal son was sent-away from his homeland to establish a kingdom of his own. Sent-away sons in the Bible include Cain, Abraham, Moses and David.

Cain is presented as the royal descendant of the historical Adam and Eve. Cain is designated as one who has dominion, like Adam. In the context of Cain's Neolithic culture his rule would have been seen as divine appointment. This may be why the biblical writer mentioned God's protection of Cain as he wanders away from his home. 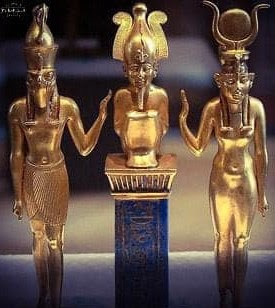 Divine appointment and protection of rulers was portrayed on ancient Nilotic monuments as divine overshadowing of the sun, the emblem of the Creator. This status pertained to rulers only who were expected to reflect the glory of the Creator. In the image above, a king is show between Horus and his mother Hathor. Note that Hathor is overshadowed as the Woman to bring forth the Seed of God (Gen. 3:15) She foreshadows the Virgin Mary who conceived by divine overshadowing (Luke 1:35).

Among Abraham's Proto-Saharan ancestors, status and occupation were received from the father. As the "son" of Adam, Cain hold the status and occupation of a king ruling over a territory. Among the Proto-Saharan rulers bloodline was traced through the mother (as even today among Jews). In claiming that Cain was the offspring of Eve, his bloodline is traced back to Eden. As a ruler of Eden, Cain's status in the Bible cannot be overlooked or denied.

If Adam is the first to rule on earth, then Cain is the second ruler. That the Bible grants Cain ruler status is evident from a study of what Cain symbolizes in Scripture. When Jude warns early followers of Jesus not to abandon Christ because of their sufferings, he uses three men as examples: Cain the ruler, Balaam the prophet, and Korah the priest. These were the three most sacred offices among Abraham’s people and they were sometimes filled by people corrupted by the world.

Genesis 3-5 is about a specific group of rulers, the ancestors of the Horite Hebrew. Genesis 4 lists the kings descended from Cain by his cousin wife, the daughter of Enoch/Nok. Genesis 5 lists the kings descended from Seth by his cousin wife, another daughter of Enoch/Nok. These two ruler lines intermarried (endogamy) and because Abel apparently did not survive to the age of marriage, the clans of Cain and Seth appear to be a matrimonial moiety.

This is supported by the evidence of ancient texts in which the Sethites and Horites maintain separate shrines (mounds) as separate ritual groups yet one people serving the same God.

Utterance 470 of the Pyramid Texts contrasts the Horite and Sethite mounds, designating the Horite mounds "the High Mounds."

The two groups are separate yet related, suggesting a moiety. The term "moiety" refers to two social or ritual groups into which a people is divided. The distinction between the two groups is evident in PT Utterance 424: "O King, a boon which the King grants, that you occupy the Mounds of Horus, that you travel about the Mounds of Seth..." Here we find a suggestion that the Horite Hebrew were named for their devotion to the son of God who the Nilotes called Horus (HR- Most High One). Among the Horites of Mesopotamia he was called Enki.

That both groups serve the same king is evident from PT Utterance 213: "O King, you have not departed dead, you have departed alive...The Mounds of Horus serve you, the Mounds of Seth serve you."

Utterance 424 of the Pyramid Texts continues, "that you [King] sit on your iron throne and judge their affairs at the head of the Great Ennead which is in On." Though separate, the Horites and the Sethites are judged by a common king.

The historical Noah emerges more clearly when we place him in the context of a Proto-Saharan ruler who lived approximately 5500 years ago when the Sahara experienced a wet period (African Humid Period). This is the period of the Old Kingdom, a time of great cultural and technological achievement in Egypt. The population of Egypt under the first dynasties was between 1 and 2 million inhabitants. Edward S. Ellis put the New Kingdom population at 5 million. The author of the Royal Ontario Museum website gives an estimate of between 1.5 and 5 million Egyptians during the Pyramid Age.

Noah was a descendant of the Proto-Saharan rulers named in Genesis 4 and 5. Likely, he ruled in the region of Bor-Nu (Land of Noah) near Lake Chad. This is the only place on Earth where the natives claim to live in Noah's homeland. This part of Africa was much wetter in Noah's time.

Proto-Saharan rulers kept menageries of exotic animals. These animals were greatly prized as they were brought from great distances and and were a source of amusement to the royal court. Likely the animals taken by Noah onto the ark were animals from his personal zoo.

The rulers of the old world imposed taxes on cargo that moved through the water systems of their territories. They used the interconnected lakes and rivers to expand their kingdoms and to spread their worldview. The Kushite kingdom builder Nimrod is an example. His father Kush controlled a region of the Upper Nile. According to Genesis 10:8-12, Nimrod left the Nile Valley and built his kingdom along the Tigris in Mesopotamia. The language of his territory was Akkadian. In Akkadian the term for ruler-priest is Abru, from which the term Hebrew is derived.

Noah was the grandfather of Kush, so we should not be surprised to find him in Africa. Cain, Noah, Kush, Nimrod, Abraham, Moses, David are the ancestors of Mary's family and that she too was of the ruler-priest lineage was admitted even by those who hated her. In the Talmud it is said about Mary: “She who was the descendant of princes and governors played the harlot with carpenters.” (Sanhedrin 106a)


The Search for Noah's Ark

Noah's ark has never been found. People are not looking in the region of Noah's homeland. The evidence suggests that Noah's ark came to rest on Mount Meni (Har Meni, not Armenia) in northeast Tanzania. This mountain is called Mount Meru.

Even if the search moved to East Africa, it is not likely that the Ark of Noah would be found since it was made of  mostly of reeds which degrade quickly. Noah's ark would be more than 5000 years old. A reed boat would quickly disintegrate in 2 seasonal wet periods on Mount Meru; one from March to May and another from October to November.


The Sons and Descendants of Noah

The sons of Noah continued the matrimonial moeity. The lines of Ham and Shem intermarried. Their descendants were great rulers also. One of the greatest was Nimrod, a Kushite kingdom builder, whose territory in the Tigris-Euphrates Valley was extensive. Abraham is a descendant of these Kushite rulers. Their ruler-priest caste was called habiru, which is derived from the Akkadian word for priest: abru. The caste was called abrutu in the language of Nimrod's territory in Mesopotamia. They represent the oldest known order of priests and Jesus Christ is a descendant of their ruler-priest lines.